Top D1 programs are relying less on recruiting in Maryland

A few weeks ago, we published a post detailing the distribution of D1 players from every state and several Canadian provinces.  The idea was to use the share of players that come from each state as one way to examine the growth of the sport.  All things considered, I’d expected there to be a more drastic shift away from the traditional power centers.  In reality, while we definitely saw a shift toward western states and other non-traditional areas, it was slow and the traditional states still dominate the D1 landscape.

But we’ve had some additional questions and comments from readers, specifically around how the trends look if you split out the top tier of D1 programs from the bottom tier.  We will offer a bit of wild speculation, but mostly, I wanted to share the data to advance the discussion amongst those who are more knowledgeable about recruiting than me.  The full table showing the growth rates, by state, split out by tier can be found at the bottom of this post.  See the appendix for notes on reading the charts and the list that was used for “top-tier” teams.

But a few things stood out:

The state of Maryland is one of the two or three contenders for “lacrosse motherland”.  But the top tier programs have been increasingly looking outside the Free State to fill their rosters.  The chart below shows the share of all D1 players from the state, split out by top tier (red) and non-top-tier (blue) programs. 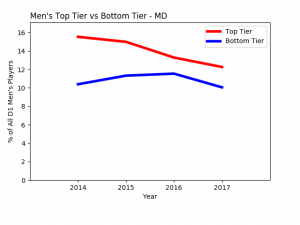 Across this data set, the state has always sent about 11-13% of all D1, but clearly, it’s been going down in the past few years.  We can see that since the start of our data set, the top tier has consistently sourced fewer and fewer players from MD.  However, the rest of D1 was getting more players from the state up until this year.  In total, if you compare 2014/15 with 2016/17, the non-top-tier teams have been fairly steady.

Are the bottom tier programs just lagging in picking up on the trend?  Or are they taking advantage of the top tier programs being more adventurous and picking up players they normally would lose out on.  Is it a simple fact of recruiting resources not allowing lower tier teams to send coaches so far from campus?  If so, how will the new recruiting tech organizations affect this trend?  I’ll be very interested to see how this trend plays out next year, when we’ll be able to see if the bottom tier programs continue the 2017 dip. 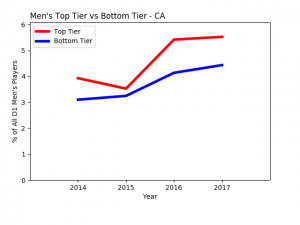 Over the past two seasons, the share of top-tier players hailing from California has jumped from 3.7% to 5.5% (roughly a 50% increase).  In that same time period, the share of non-top-tier players from CA rose only from 3.2% to 4.3%.  I really have no explanation for this.  Could be that the California lacrosse scene has improved so much that more players are meeting the cut-off for top-tier programs.  But since the trend is also upward for the non-top-tier programs, this doesn’t seem likely.  More likely is that the top programs, seeing the increasing competition for top prep players, have finally started to put their energy into recruiting the west coast.  Events like the Pacific Coast event between Cornell and UVA can’t hurt.

There really doesn’t appear to be a consistent pattern overall

I didn’t have a lot of expectations before starting this analysis, and in general, it’s 90% certain that in any analysis, you will not find obvious, clear signals.  So it should surprise no one that we don’t see a lot of consistency from state to state.  Maryland and New Jersey, while they don’t share a border, are both located within the “traditional” power center of the sport, yet we see a very different pattern.  While the non-top-tier shares from MD/NJ are both fairly flat, we actually see a moderate rise in NJ’s trend line for the top-tiers.  Compare that with Maryland, who has seen a very clear negative trend among the top tier programs.  This does support the idea that any shift away from traditional power centers is slow and non-uniform. 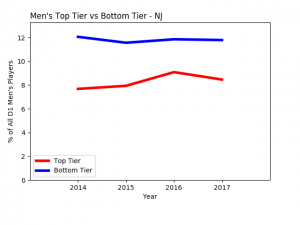 If you see something consistent, let me know. 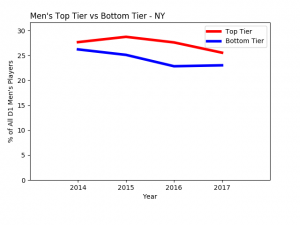 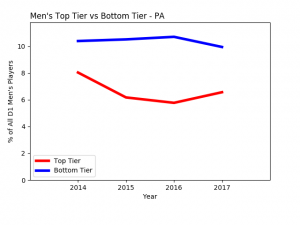 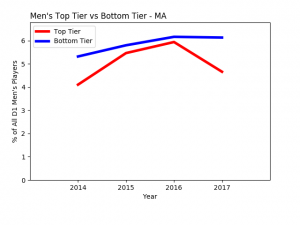 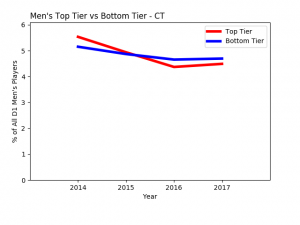 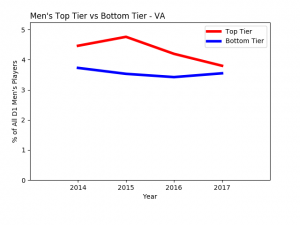 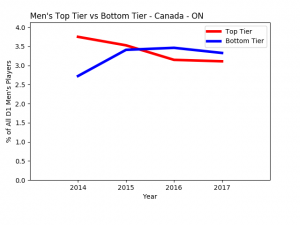 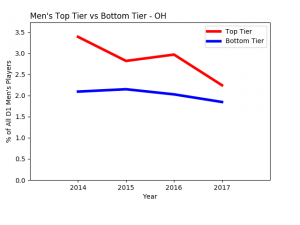 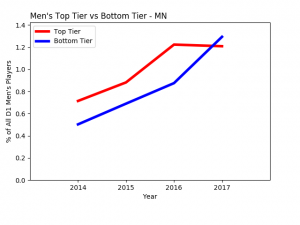 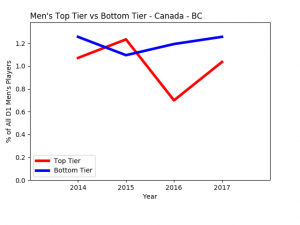 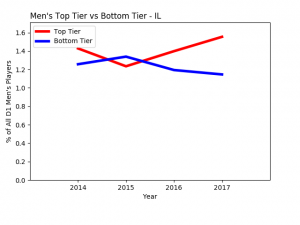 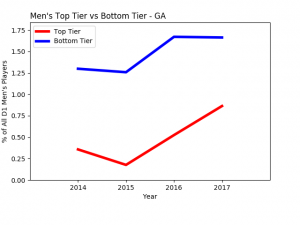 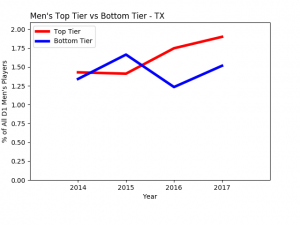 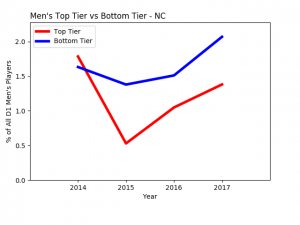 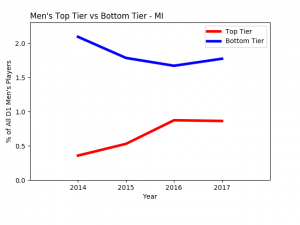 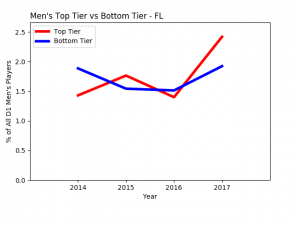 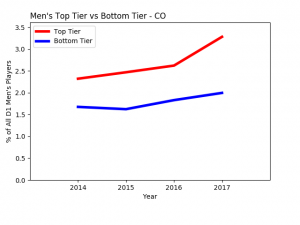 A few notes to help read the charts below:

‹ Princeton takes the top spot: Week 5 Game Control Standings › Timer ons are starting to favor the defense, except in the 4th quarter