Timer ons are starting to favor the defense, except in the 4th quarter

If you are familiar with the concept of prevent defense, you understand that the amount of time remaining has a huge impact on strategy.  A team up 3 goals with 10 minutes left may not take their foot off the break, but a team up 3 with 1 minute left will almost certainly not be looking to score.   We can’t measure strategy precisely, but we can see how changes in strategy affect other metrics.  We previously wrote about the expected goal values of each play type.  In this post, we’ll explore how those play values change throughout a game.

For some background, expected goal values are a measure of which plays typically lead to scoring goals vs allowing goals.  A missed shot is followed by a goal for the attacking team more often than a turnover for obvious reasons.  There are a few things in particular that we wanted to explore relative to how expected goals change over time:

Methodology Notes – This analysis includes 1,053 games from 2015 through 2017.  We did not include plays that had less than 50 occurrences in each of the 4 quarters.  Expected goal values were calculated via the same methodology as the previous post on the topic.  More detailed notes can be found at the end.

In general, this analysis relies on three main concepts: 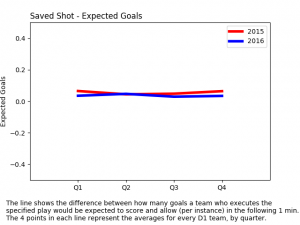 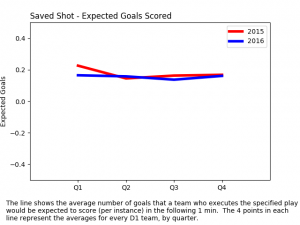 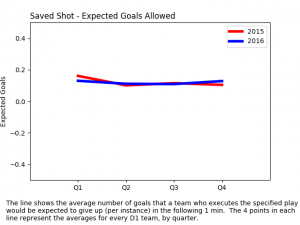 As an example, the charts above show the expected goal values for saved shots.  The first chart shows, in red, the expected net goals, by quarter, for all games in 2015.  The blue line shows the same for 2016.  Because the red line is slightly higher than the blue line, we would say that the offense scored slightly more goals in 2015, on average, following a shot they took that was saved than in 2016.  The middle chart shows the average number of goals scored by the team that took the shot within 60 seconds of the save.  We can see that a team scored quite a  bit more often in 2016 than in 2015 after a saved shot in the first quarter.  The rest of the the quarters were fairly flat.  The last chart shows the average number of goals that the team who took the shot could expect to surrender within 60 seconds of the shot.

We see again that they would expect to give up more goals in the first quarter of 2015 games then 2016 games, while giving up fewer Q4 goals in 2015 than 2016.  The net effect of all this is that, as the first chart shows, a team was slightly better off in 2015 than in 2016 after a saved shot.  So with that primer out of the way, let’s dig into the four things that stood out.

A time out called in the first or third quarter would be expected to have little impact on the score; the team calling the timeout tends to score about as much afterwards as their opponent.  But a timeout called in the 2nd or 4th quarter, on average, results in a swing of ~.1 goals toward the team that called the timeout.  Relative to other play types, this is actually a small effect, but it’s worth examining because of the pattern.  The graphs below show the values, by quarter, in both 2015 and 2016.  As explained above, the first chart shows the net effect of a timeout on the score, the second chart shows the goals scored by the team calling the timeout (within 60 seconds), and the last chart shows the goal expectation for the opponent. 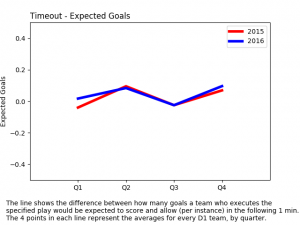 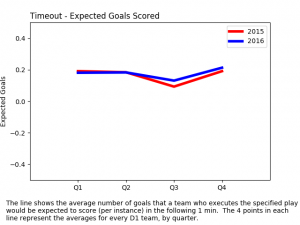 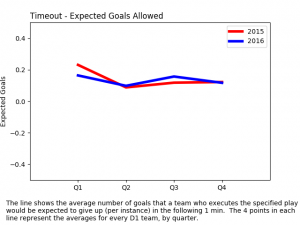 Again, the effect here is smaller than with some other play types (i.e. penalties or missed shots), but the pattern suggests that a timeout called in the 2nd or 4th quarter is fundamentally different than one called in the 1st or 3rd.  Additional data point for our consideration: 77% of all timeouts are called in the 2nd or 4th quarter.  I also want to note that the graphs look exactly the same whether we exclude goals that are scored just after the start of the quarter (when the timeout was called on the other side of the break).

So what is going on here?  Anecdotally, it does seem that coaches use timeouts before the end of halves to set up a last chance scoring play.  However, looking at the goals scored chart (middle), we see that the goals scored effect in Q1/Q2 are exactly the same.  The reason that the net is greater in Q2 than in Q1 has to do with the fact that when a team calls a time-out in the 2nd quarter, they are much less likely to subsequently give up a goal than they are in the first.  I have no explanation for this.

Similarly, teams that call a timeout in the second half are about equally likely to give up a goal whether it’s the 3rd or 4th quarter.  But they are much more likely to score a goal if it’s the 4th quarter.  Again, no explanation, but I’d be willing to let defensive fatigue be the leader in the clubhouse.

The net effect is that timeouts called in the 2nd or 4th quarters are much more likely to benefit the calling team.  Does that mean that there is an inefficiency to be gained by teams no longer calling Q1/Q3 timeouts?  I’m skeptical of this.  You could make an argument that since timeouts in Q2/Q4 are more likely to benefit the calling team, then coaches should make sure to only call their timeouts then.

In reality, there is no way to measure the counterfactual; it could be that teams use their timeouts in Q1/Q3 to stem the tide of the opponent’s momentum, which would explain the lower net goal difference.  But if they were to save those timeouts for later, it may be that they would have given up more goals in the original situation then they would gain in Q2/Q4.  Setting up a last second play at the end of the game does you no good if you are down 2.

Timer ons are gradually starting to favor the defense, except in the 4th quarter

One of the biggest arguments in favor of the shot clock is that it rewards the defense and makes for fewer drag-it-out possessions.  On one hand, it appears that the shot clock is evolving in exactly that direction.  In 2015, a shot clock would have been expected to result in .28 goals for the attacking team and just .06 goals for the defense within the next minute of game play.  (These numbers are the average across all 4 quarters; so effectively taking an average of the two red lines in the second and third charts.) 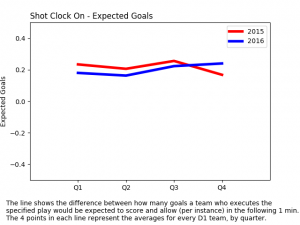 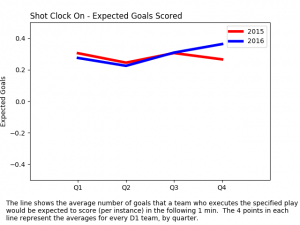 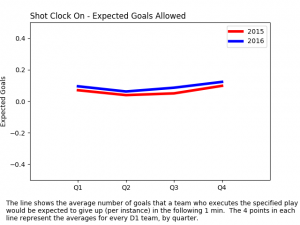 The flip side of this equation is that between 2015 and 2016, offenses seem to have increased their efficiency during 4th quarter shot clocks.  So while the shot clock has always resulted in more immediate goals for the offense, as teams have adapted and as it’s been called differently by officials since inception, the shot clock appears to be trending toward the defense.  That said, if you believe that the 4th quarter, being higher leverage, is more important, then it may be that the 4th quarter trend is enough to negate any movement in favor of the defense.

I’d be curious about how coaches view this shift.  Are officials calling for shot clocks in a way that favors defense more than in 2015?  What are teams doing that allowed them to increase the offensive output so much in the 4th quarter of 2016 vs 2015.  My guess is that offenses have developed more sophisticated timer-on sets that are tailored to the 30 second constraint.

It is interesting to look at the expected goal values for the shot clock because it’s a relatively new part of the game, so teams are adjusting to it and officials are still settling into a rhythm with the calls.  So while we can’t necessarily say which of those two factors is driving the trends shown above, it’s interesting to see that the “newness” shows up in the data.  Ground balls on the other hand, not so much: 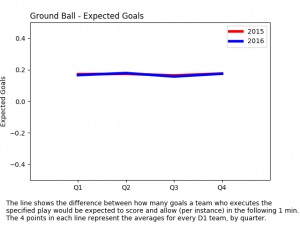 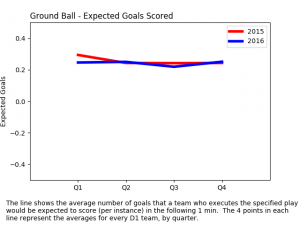 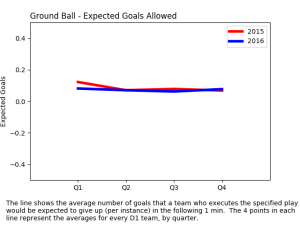 That chart is not missing the 2015 line, it’s just about completely overlapped by the 2016 line, which means that there has been almost no change in the expected goals effect of a ground ball from year to year.   Additionally, there is hardly any variation from quarter to quarter.  If we dig in, we see that in 2015, both the team picking up the ground ball and their opponent scored more goals (in the immediately following 60 seconds), but these increases completely cancelled each other out.

It’s a similar story with face-off wins (a close cousin, I know), successful clears, missed shots and saved shots.  This suggests that the sport is not in the midst of any large scale strategic shifts, which could cause some variation in how these plays relate to scored goals from year to year.  If we were seeing a year on year increase in pace for example, then you might expect to see both goals scored and allowed rise for some of these play types as teams push the pace, while putting themselves at risk of a counter-attack.  The fact that we don’t see that, at least in the 2015/2016 data suggests nothing of the sort is happening.  It will be interesting to re-assess these numbers when more of this season is complete to see if this year has brought any noticeable changes.

Some plays are just random

Pipe shots are about as close to a random event as you can get.  The round ball hits a round metal bar and goes…somewhere.  Where it goes is anybody’s guess, which made us want to look at how goals follow pipe shots.  On the one hand, one team is obviously in the attacking end when there is a pipe shot, so we would expect pipe shots to have a positive expected goals value for the offense.  On the flip side, they don’t happen all that often (relative to other play types) and the ball can just as easily end up kicking out toward midfield and a transition opportunity the other way. 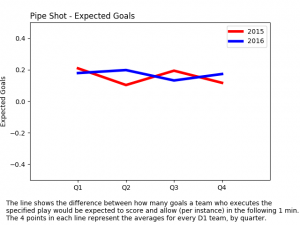 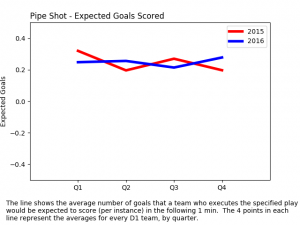 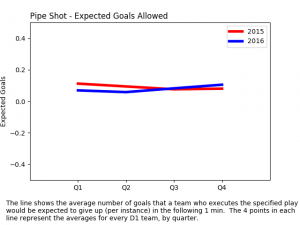 And in fact, we do see pretty random double-helix looking graphs emerge.  From year to year, there is almost no discernible pattern, except for the fact that the expected goals value is positive.  So a pipe shot is more likely to result in the shooting team scoring a goal because the event by definition happens at the opponent’s goal.  That said, across all 4 quarters, every pipe shot is followed by .11 goals by the defense (within 60 seconds), the highest mark for any attacking play (blocked shots were a close second).  But again, it’s clear that there isn’t any quarter to quarter progression when it comes to pipe shots.

Unforced turnovers, goalie changes, and penalties also didn’t have much consistency from year to year.

One key point is that we ignored goals that occurred just after a quarter break when evaluating a play that occurred just before the quarter ended.  So if the end of the second quarter ended with a missed shot, and after the face-off to start the third, Team A scored a goal within 10 seconds, the goal would not be counted toward the expected goals total for the missed shot that ended the second quarter.  Rationale here is that the quarter break is just too big of a stoppage in game flow, so including that goal in the expected goal values would absorb that break and distort the numbers.  To avoid that, we just excluded those goals.

We did use a threshold to exclude play types that didn’t have sufficient sample size.  Because our analysis was mostly about comparing quarters, we excluded any play type that didn’t occur at least 50 times in all 4 quarters during each season.  Fortunately, this only eliminated non 30/60 second penalties, so sample size was not much of an issue for this work.

‹ Top D1 programs are relying less on recruiting in Maryland › Win Expectancy Craziness: A collection of the greatest comebacks in recent memory