I created this page so that the US Lacrosse Magazine team would have easy access to the LacrosseReference information/perspectives/graphics that I think would be complementary to their in-flight articles.

If you have questions about the content, please feel free to email me. If you have any technical issues with the embedding feature, send me the link of the site that you are trying to embed the content into and I can diagnose the issue. If you do end up using a statistical nugget or a graphic, please remember to include a link to lacrossereference.com.

We are still working out the kinks here, so I’m more than happy to help troubleshoot technical issues or come up with extra statistical context for a specific narrative. Just let me know.

Also, GTown ended the year with the 6th best expected shooting percentage against. That means that taken together, the “quality” of the shots that their opponents were able to get was the 6th worst in all of D1. This suggests that their defensive success not just about great goalie play or lots of turnovers (although the did force plenty).

Interestingly, the average offensive possession against Georgetown was 45.6 seconds (11th longest in all of D1). Longer possessions means that you need to communicate effectively for a longer period of time. Adding players into the mix may jeopardize that. Of the 26 teams that I’ve seen rosters for, the Hoyas return the 12th most defensive production (69% as measured by defensive EGA). So it’s not like they are running it back with the whole defense Bowen. If there are some early season communication issues, I would be surprised. 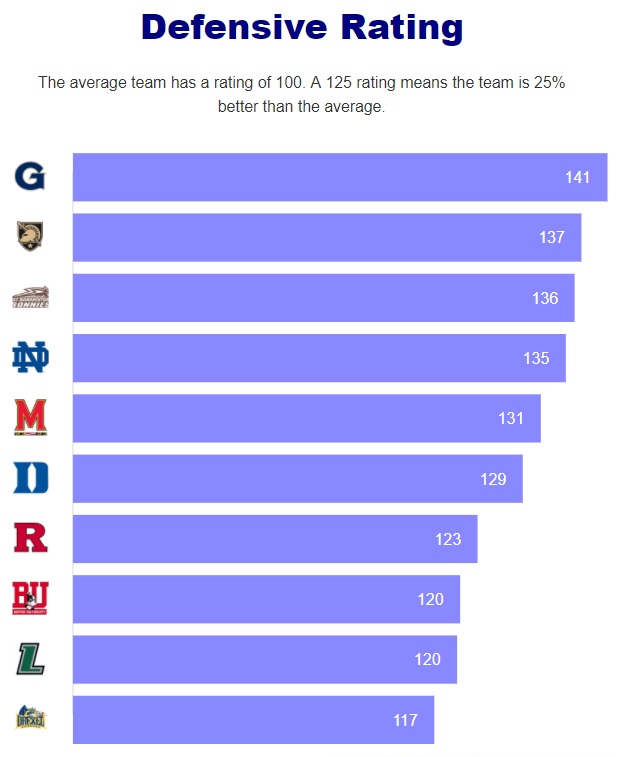 Only 2 players since 2015 have led their team in Goals/GBs; Robinson in ‘21 and Connor Fields in 2015. In fact, he became somewhat of a groundball master as the season went along. Would be interesting to hear whether the coaching staff encouraged this in some way. Why did he become so much better at grabbing GBs over the course of the season?(GBs graphic shown below)

There is a real risk to the Delaware offense around losing Charlie Kitchen. Robinson had 31 of his 43 goals assisted (8 by Kitchen and 8 by Kurtz). Of the 11 players who scored more than 40 goals last year, that percentage is 3rd lowest (Cormier and Wisnauskas). He seems to rely a ton of other players to generate the movement that gets him open. Charlie Kitchen had 26% of the team’s assists last year; how does Mike Robinson’s game fit in a world without Kitchen? 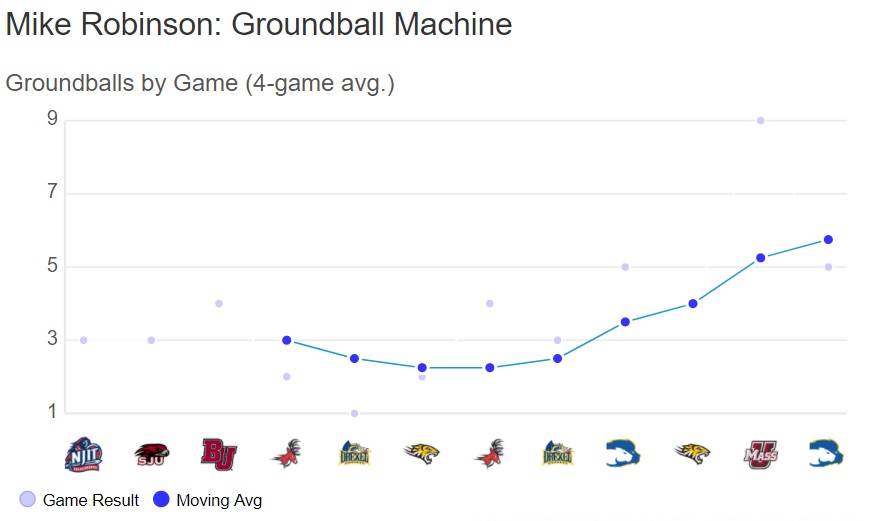 He was certainly productive, but there is an angle to this story around how much his role changed with the arrival of Morrill (and how it will change with him gone). Shot share dropped from 22.3% to 17.8%; assist share dropped from 25.6% to 6.8%. If you just look at offensive efficiency, the Pios were better with Hannah was playing a larger initiator role.


My general takeaway from looking at his stats is that he’s not the right guy to be leading the team in shots; curious whether he’ll continue to be such a volume shooter; feels like he needs to either bump up the shooting percentage OR get back into the distributor role a bit more with Morrill gone. 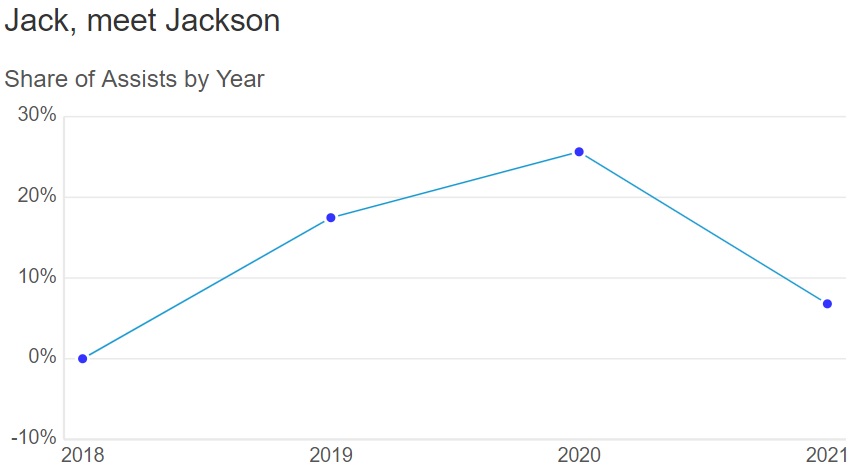 Great piece on Belle Martire; she was a player that I thought deserved a lot more publicity last season, so glad you guys were able to shine some light on her. There are 2 stats that I think really complement the career progression angle that was highlighted throughout the piece.

First of all, her assist rate, which it basically assists / touch, has consistently gone up through her 3 seasons. Like remarkably consistent. They asked her to be more well-rounded, and she definitely did.

Second, in terms of efficiency, she’s also done a great job to cut out turnovers as well. Her individual turnover rate has gone down each year and as a result, her assist-to-turnover ratio is starting to look like a hockey stick.

Last, the piece cited her 54.4% shooting percentage, which puts her in the 89th percentile overall for her career. But it actually downplays the impressiveness because she takes shots that are, on average, harder than most players. As a result, when you look at excess goals (how many more goals she’s scored than you would expect given the shot difficulty), she has the 32nd best mark of all-time.

Here is the assist rate chart:

Here is the assist:turnover chart:

So Stony Brook is losing a lot. Of the 79 WLAX teams that have posted rosters, only 14 return less production (measured by EGA). Kennedy and Ohlmiller were amazing, and their production needs to be replaced. The piece did a great job laying out how the existing players from last year’s roster are going to have to step up. It also mentioned the Albany transfer, but that undersells what Spallina did in the transfer market this off-season.

Of the 79 rosters posted, only 4 teams are bringing in more production via the transfer portal. So yes, they have Zapolski, but overall, the amount of talent they can draw from via transfers will go a long way to replacing what they lost.

Here is the incoming production graphic.

Cuse returns the most of any of the ACC WLAX teams that have posted rosters so far. UNC has a big edge in incoming production via transfer, so it will be interesting how those two facts play out.

She saw a huge jump in her draw-specific production numbers this year. Her mark of 23.6 expected-goals added on draw plays alone was 9th nationally (Charlotte North was #1 of course). The chart below shows how she’s rebounded from those injuries to really develop into a draw star.