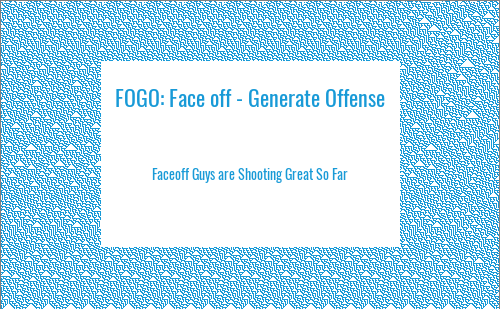 In my inaugural piece for US Lacrosse Magazine, I noted that 2022 has been a year of aggressive FOGOs. I mentioned the point totals that faceoff specialists have put up, which are the highest since the 2017 season.

It’s early, but it’s an interesting trend. In previous years, we’ve heard criticism of the faceoff-get-off model, where FOGOs have become so specialized that they can’t do anything but faceoff. So does this year signal a reversal of the trend? Are we heading back to an era of do-it-all midfielders?

Too soon to tell. It’s February. That said, we can dig into the stats and see what is driving this offensive renaissance.

It’s early in the season. Maybe this percentage comes down. Maybe teams are just giving up better looks than normal off faceoff wins. Or maybe faceoff specialists and their coaches have put extra effort into making those players more of an offensive weapon.

There is an interesting longer-term trend that may be intersecting with the small sample size here. Wing play has become less and less of a factor on faceoffs over the years.

In the play by play logs, it notes who the faceoff guys were and who ultimately picked up the ground ball. That means we can flag every faceoff as being won by the FOGO or picked up by a wing. (Incidentally, you can also use this to see which teams rely on wing play to win faceoffs vs those that are powered by an individual FOGO).

Fewer wing GBs suggests that more faceoffs are being won cleanly by the FOGOs. If that means that they are also getting into a position where they can take better shots, then that might lead to a higher shooting percentage. It’s hard to imagine that a 0.7% increase in FOGO wins could lead to a 10 percentage point improvement in shooting accuracy though.

But this decline in wing play is so steady and so long-lasting that it’s clear that something is going on here.

As I’ve dug into the data a bit more, it seems to me that maybe aggressive was the wrong descriptor for the ’22 class of FOGOs. I have a metric (usage-adjusted-EGA) which represents individual player efficiency.

As I go back farther in the data set, the best year for raw FOGO point totals was 2017. But they took more shots that year and turned the ball over quite a bit more as well.

As a result, the efficiency metrics peg 2017 as one of the least efficient years for faceoff specialists. Maybe that is part of the reason for the hyper-specialization in the first place. Now, even though they aren’t shooting as much as 2017, the decline in turnovers and the increase in shooting percentage produces the high-water mark in efficiency that we are seeing this year.