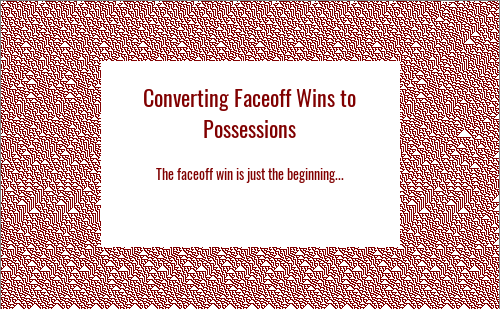 If you don’t win the possession battle, it’s hard to win a lacrosse game. Not impossible, but it is much much easier if you have more bites at the apple than your opponent.

There are two ways to be an effective possession team: 1) clear and ride better than opponents and 2) win faceoffs. Given that the gap between the best and worst clearing teams is pretty narrow, winning faceoffs is the biggest differentiator in the possession game.

Every time I bring up faceoff win rates though, the same question comes up: do you track faceoff wins that are immediately turned over or otherwise do not become real possessions?

Until now, I’ve always had to say no. But when you get the same question enough times, these sort of things go from “interesting idea” to “OK, gotta build it.” So here we are.

What follows is a quick definition, a snapshot of what faceoff conversion rates looked like in 2021 and then a bit of discussion around implications.

First, some definitions. Faceoff wins are calculated based on the person scoring the game determining that someone earned possession of the ball after the whistle blows. So there is a bit of discretion there. How long does the ball have to be in a cross for it to count? Different scorers probably have a different cut-off. But my perception is that to be credited with a faceoff win, you actually have to have the ball long enough to do something with it.

Here’s where the concept of a faceoff conversion comes into play. If the FOGO picks up the GB and immediately whips the ball out of bounds, that’s not really a possession where the offense had a chance to score. Likewise, if the FOGO picks up a GB, runs down the middle and shoots it straight into the goalie’s stick, that’s not really a possession either. You can argue that, depending on the FOGO, this should count, but in an era of faceoff-get-off, I’m inclined to say that a FOGO shot that is saved shouldn’t be considered a conversion.

(And think about how this stat could be useful. It’s really about whether a faceoff unit is doing what it needs to do to set up the offense after a clamp or GB. I bet most coaches would say that a FOGO sprinting down and taking a shot that is saved doesn’t accomplish that goal in most cases.)

So that leaves us with a set of rules that we can apply to determine whether a faceoff was “converted” into a possession. They are:

If any of those 5 criteria is met, I count it as a faceoff conversion.

The Crowd was way off

Typically when I do a Twitter poll and ask people to estimate something, they are usually pretty spot on. Not this time…

What percentage of faceoff-wins are converted to a real offensive possession?

Technically, some people were right, but just barely. And 2021 was the first season that I have data for that was uinder 95%. To be honest, since I posted the poll before I did the analysis, I figured the 85% – 95% people would be right. 93% seems high for some reason. I’m guessing it’s because the instances where the faceoff didn’t convert are more easily recalled.

And to a degree, this makes sense. The median team has a successful clear rate of around 93%, and it’s a lot easier to convert a faceoff into a possession than a defensive stop.
Maybe you figured that there are a bunch of cowboy FOGOs running around ripping shots into the goalie’s chest, but the data suggests that’s not too common.

FOGOs did take more shots at a lower shooting percentage last season (.51 shots per FOGO per game; 23.8% shooting) than they have in recent history, and if a lot of those shots were saved, that would have contributed to the drop in conversion rates.

A lot of coaches consider a FOGO shot off the faceoff that is saved to be akin to a turnover. Seeing more of those in 2021 would not make them happy.

It is interesting to note that there is no real relationship between being good at winning faceoffs and being good at converting faceoff wins to possessions. Lehigh, who finished last year with the top faceoff win rate thanks to Mikey Sisselberger, was decidedly average in converting those wins into offensive possessions. Monmouth, Hobart, Vermont were some of the teams that had strong win rates and conversion rates.

Of course, the difference in conversion rates between the best and worst teams isn’t going to make up for not winning enough faceoffs. Towson was among the better conversion teams but was last in the CAA in faceoff win rate.

The Tigers won 120 faceoffs in 2021. If they were just an average conversion team (94.8%), they would have had 4 fewer offensive possessions on the season. Not a huge deal.

I think you look at this sort of statistic the same way that you should look at riding and clearing. It’s important, and you don’t want to be worst, but putting energy toward being the best is energy you should probably use elsewhere. Like recruiting and developing FOGOs that can win the faceoff in the first place.

If a poor conversion rate is part of a high-turnover rate in general, then that’s a bigger problem to address. But you wouldn’t say: “oh, this team is pretty good on ball security, but they have a real faceoff-conversion issue to solve.”

Faceoff Conversion Rate, just not that big a deal

If there is anywhere that this stat might come in handy, it’s in adjusting the possession-margin stats. Denver, Lehigh, Vermont, and Duke were the best teams last year in terms of total possession margin. I’m debating whether a faceoff that doesn’t convert to an offensive possession should count as a possession towards a team’s possession margin or offensive efficiency.

I don’t count failed clears as possessions because the offense didn’t truly have a chance to try and generate offensive looks. If a faceoff isn’t converted to a real possession, perhaps that shouldn’t be included either.

The flip side is that a FOGO shot that is saved by the goalie counts as a failed conversion when this is obviously a “possession” in the efficiency sense of the term.

I think for now, I’m going to keep these failed faceoff conversions in a team’s overall possession total. They are fundamentally different than a failed clear.

So at the end of the day, I feel like faceoff conversion rates are much ado about nothing. Granted, “much” is a relative term since this is the first and only time you’ve probably read anything about it or heard anyone talking about it.

Put it this way. When I started looking into faceoff conversions, I thought it might be an interesting way to think about possessions and possession-margin. Turns out, it’s more like clearing, which is to say, important, but not that important.