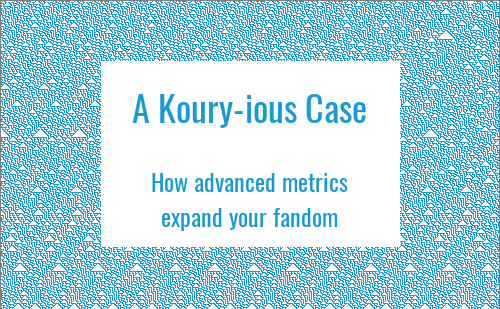 I recently published my Stats 101 resource. The idea is to have a central location where all of my stats are in one place so that it’s easy for lacrosse fans to get a sense of a) what the suite of advanced lacrosse stats looks like and b) to get a sense of what kind of range is “good” for each of them.

And in the process of putting the initial post together, something popped out that surprised me. You see, there are some stats where a random player leading the country is more common than others. Rate stats, for example, can be a bit funky due to low sample sizes. In other cases, a stat may not be strongly correlated with skill.

If I told you that someone you’d never heard of led the nation in shot-on-goal rate, it might not shock you. After all, shots-on-goal can be good (if they go in) or bad (if they are saved). A player who has a high SOG rate is not necessarily playing at a high-level; maybe they are just focusing too much on putting shots on net.

With other stats, the relationship with skill is more correlated. EGA (expected goals added) is my stat that is a proxy for overall production. The more good things you do, the higher your EGA rating will be; the more negative plays you make, the lower it will be. So if you see a player leading the nation in EGA, there’s a good chance it’s a good player.

Still, with EGA, the possibility exists that a player has a high level of production because they get a lot of touches. It’s hard for a bad player to have a high EGA rating, but the highest EGA rating isn’t necessarily proof that the player is among the most skilled players.

And then there is the third class of stats, which try to take out all the noise and isolate the thing we care most about: skill. At a team-level, my opponent-adjusted efficiency ratings are a good example. Efficiency is the gold standard for how well an offense or defense is playing, but raw efficiency is distorted by the strength of the opponents played. A team who played a bunch of terrible defenses will have a higher efficiency rating than an equally skilled offense playing great defenses. Opponent-adjusted efficiencies isolate the skill of the unit.

At a player level, I have tried to do something similar with my new usage-adjusted EGA (uaEGA) metric. It adjusts overall production (EGA) by the amount of playing time or touches that a player gets (measured by play share).

The result is a metric that isolates a player’s true efficiency level because efficiency is production-per-touch and that is exactly what uaEGA measures.

So it was quite a surprise when I looked at the Stats 101 resource and saw a name I didn’t recognize tied to several of these more advanced production and efficiency metrics: Maddi Koury.

I’m going to bet that 99% of your have never heard of Maddi Koury, which is a shame, because she had one of the statistically best seasons in D1 WLAX last year.

With the exception of turnover propensity, she was a 98th percentile player in most of the rate stats that we care about for offensive players. (And she was still in the top quartile on that score.)

The reason that you probably haven’t heard of Koury is that her play share was just 6th on the Mercer roster. She made 15 of her 18 shots, but she took just 5.1% of the team’s shots on the season.

Despite the low play share, she contributed 24% of the entire team’s assists. The story of Koury’s freshman season was brilliance, in small doses.

I’m not criticizing the Mercer coaching staff here. I have no clue what happened in the Bears’ season, much less in their locker room. There may be very good reasons that Koury only had the 6th highest usage rate on the team.

What is more interesting is what happens next. As a sophomore, one things we can say for sure is that Koury is going to have more opportunities.

How do I know this? Because of the 5 players with a higher play share in ’21, 3 of them are not on the ’22 roster (Hailey Rhatigan, Lily Morin, Eva Thorn). So you would expect that natural roster attrition will open up more playing time for Koury.

And there is a valid question about whether her sky-high efficiency stats will hold up against a larger offensive load. And in fact, players with high usage-adjusted-EGA do tend to see some regression back to more normal levels in the following season.

The flip side is that while her play share may not have been commensurate with her efficiency stats, it wasn’t like this is a player who got lucky in very very small sample sizes. Point for her having another good season this year.

Regardless, her 2021 season leaves the Mercer coaching staff with an interesting question as far as how to deploy Koury and the rest of the returning rotation players. Rhatigan was clearly the engine that drove the offense last year (26% of their shots and 16% of their assists). Shannon-Urey took 12% of the team’s shots last season, so perhaps she steps into the primary finisher role.

But the challenge there is that Koury’s shooting stats were the best on the team. Do they look to her to take more shots or rely on her obvious facilitation skills to try to create offensive opportunities for the rest of the offense?

Mercer ended the year 2nd in the SoCon in terms of adjusted offensive efficiency, so there is a track-record here. A bigger role for Koury could certainly help close the gap on Furman.

I’m fascinated by these sorts of cases where you have a hole in the roster and any number of players who could fill it. There are locker room dynamics, built in coaching biases, and all the other things that complicate this sort of personnel decision. And in some offenses, it matters less because you have the personnel to play a sort of free-flowing position-less style

Penn State last year was an interesting case where you are asking TJ Malone to fill the shoes left by Grant Ament. There are many other situations that are similar. My hope is that by identifying these sorts of cases, we can develop a better theory about how to develop a roster such that you 1) are making the best use of every player’s skills and 2) aren’t leaving a particular role or position in a bad spot by the graduation of a key cog.

That balance is tough to strike, but I suspect that the teams that do it best are the ones that are able to avoid the big year-to-year swings in outcomes. It would seem that the best process is to develop players into the roles you know they’ll be in next season while still trying to win as many games as you can in the current year.

Imagine a world where teams proactively put their players in “experimental” positions to get a clue about how they would fare in a similar role on a more regular basis. Any drop-off in performance may be worth it if you are learning something that helps you down the road or even in the next season.

I think this is an interesting use case for data and analytics. If you knew you had a particular role that was going to need to be filled next season and you had 3 players that could fill it, you could use their existing stats to “recommend” a series of experiments. For a quarter at a time, you put each of the 3 players in the role they might be filling in the following season. You then use the strength of the opponent and the outcome of that quarter to “grade” each player on how the experiment went. Do this enough and you’ll have a better picture of how each player might fit into each larger role.

I’m not saying that this is some sort of no-brainer easy solution to roster development. Quite the contrary.

But I suspect the down-side risk of putting an untested player into a larger role is bigger than people might expect. As I’ve said many times, incorporating analytics into your day-to-day isn’t going to turn a bad team into a good team. But this is another one of those long-term small edges that analytics can give you. Pick up enough of those and you are looking at something that can be a real competitive advantage.

Keep an eye out for the interesting cases; sometimes they can tell you how the world really works.

Have you checked out PRO yet?