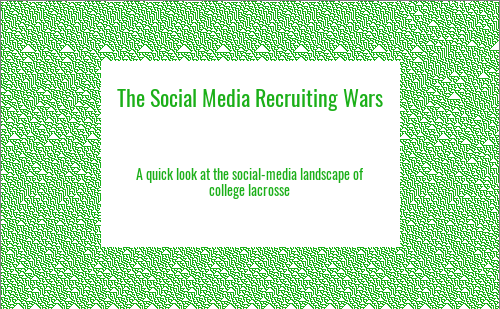 At this point, everyone probably has at least an intuitive sense that social media is important in the marketing world. Just take the rise of the “influencer” as an honest-to-god real-life job. If social media wasn’t the place where marketing “happens” then this job would not exist.

But this off-season, as teams have rolled out their “welcome to the freshmen” tweets right after a barrage of commit graphics, I realized how much this trend has made its way into college lacrosse. Maybe I’m late to making this realization, but it is clear that social media has become somewhat of an arms race in the recruiting world.

If you want a more concrete example, just think about the fact that while every single D1 team, women’s and men’s, has an active Twitter account, a growing number have dedicated recruiting Twitter accounts as well (here’s one example).

And it makes sense; Twitter accounts are free and fans who follow the main account may have different interests than recruits who may be considering attending that school. Perhaps you can make a statement by not having a dedicated recruiting account, but whether it’s delivered through a dedicated account or not, every team is producing social content to raise their stature to prospective recruits.

But if this isn’t evidence of an arms race, I don’t know what is. I’ve had coaches tell me that they have to choose between having a student volunteer do analytics or having someone help with social media graphics. It’s an investment that takes resources which could be going somewhere else.

But recruiting is a different animal. Recruiting requires a strong program; no amount of glitter can sell an inferior product. But fundamentally, recruiting is about selling a version of the program to people who haven’t experienced it firsthand. First impressions can be hard to overcome and in 2021, first impressions are almost entirely based on the persona a program creates through social media.

It is true that better recruits generally pick stronger programs, but previous success on the field does not automatically make a school a recruiting powerhouse. Kids are picking where they are going to spend the next 4 or 5 years of their lives. It’s naive to think that they are basing that decision solely on the 200 hours they spend actually playing in games.

And even if that were the case, for every recruit, there are always going to be a dozen teams who boast similar records of on-field success vying for their services.

Admittedly, recruiting is just one avenue to building a successful program. Developing players so that they grow as they move through the program is probably more important in the long run. But no team eschews recruiting entirely; everyone needs recruits to view them in a positive light.

And now, with the NIL legislation passed around the country, there is another factor to consider when making a college choice. For a player with NIL ambitions, social media is absolutely key. For better or worse, when evaluating a player’s NIL prospects, follower count is the biggest (if not only) factor used in calculating the earning potential of a player.

If you are an incoming freshman and nobody knows who you are, being part of a program with a strong social presence is a short-cut to exposure and the NIL benefits that come with it. That’s not to say that you can’t have NIL success as part of a less visible program, but it’s harder.

I continue to be fascinated with the way that Ohio State has used their social media presence to establish themselves as a leader in NIL-support. The Buckeyes have gone so far as to publish versions of their various rosters with every player’s social handles clearly listed. For a school with the resources of an Ohio State, it makes little sense not to broadcast your commitments to student-athletes with respect to helping them build a brand.

Why wouldn’t you? It’s not going to hurt you with any recruits, but it could very well be the thing that sends someone to Columbus who was on the fence.
Rnk
Team
League
1
Notre Dame
MLAX
2
Boston College
WLAX
3
Syracuse
MLAX
4
High Point
MLAX
5
Maryland
MLAX
6
Navy
MLAX
7
North Carolina
MLAX
8
Maryland
WLAX
9
Rutgers
MLAX
10
Denver
MLAX
Rank is calculated by counting the number of Twitter users who liked each team’s tweets more than any other team.

Of course, this raises the specter of: “what about schools that can’t compete with OSU’s resources?”

Valid question. At the end of the day, I think you are putting yourself at a disadvantage if you have no social presence, but I don’t think it requires a huge investment to get to table stakes either. Remember, part of the benefit to a player of being part of a social-media-saavy program is that they can piggy-back on top of the existing audience that teams have developed over the years.

Even the lowliest program has hundreds, if not thousands, of followers. Celebrating the achievements of your players in a social-media friendly way is already going to give a kid a boost that they couldn’t have generated on their own.

My prior in all of this is that simply having someone within the program be aware of milestones and career achievements and finding a way to celebrate them on social media is going to get you 80% of the benefit that a team like OSU is getting from their investments in this area. It gives you a credible answer to questions that come up about how you are going to support a kid’s NIL ambitions.

(And if you are a team that doesn’t have a person to put on this, I have some tools that automatically highlight player performances and spit out social-media ready graphics. Just send me a note.)

The Rise of the Player/CEO

This is not necessarily related to the recruiting aspect of social-media, but just a general aside about NIL. I personally think it’s a great development because it gives kids a taste of developing a business idea. When I was in college, the only logical thing to do seemed to be to get a job where someone would pay me a salary every so often. I am a very entrepreneurial person at heart, but the obstacles to doing something for myself just seemed insurmountable.

Even as I developed the bones of LacrosseReference LLC, there were still a bunch of nagging questions around establishing bank accounts, getting an EIN, actually figuring out how to pay taxes, etc. These all fall into the category of things that are a lot easier to do than they seem. If you have a kid who pursues NIL partnerships, it’s going to mean being aware of how to do all that stuff. (Maybe not the EIN, but you get my point.)

And having done it once, the psychological hurdle associated with starting a business won’t seem nearly as difficult when and if they eventually decide to go into business for themselves. More graduates thinking seriously about how they can work for themselves is a great thing. It’s not the reason NIL legislation was passed, but it wouldn’t surprise me if it ends up being a significant incidental benefit to society.

When college athletics departments help students think of themselves as business-people and revenue-generators, we all benefit.