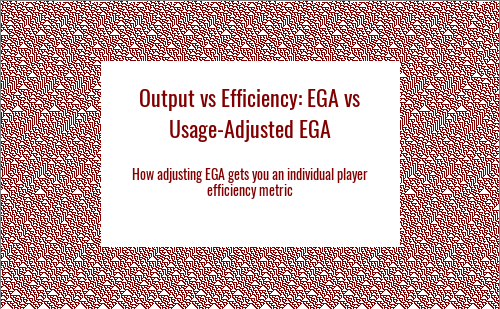 EGA (expected-goals-added) has had a good run around here. It’s been the unquestioned king of the “rank-a-player” ecosystem on this site. But that doesn’t mean it can’t be improved upon.

EGA is a cumulative metric, meaning that players who don’t get a lot of chances are more or less locked out of the top echelons. This is not entirely a bad thing. Cumulative metrics have their place, like if you are trying to compare the careers of two players. If you want to pick the more decorated player, barring some obscene difference in games played, EGA is a pretty good guide.

But if your goal is to identify up-and-coming players or perhaps determine which 2nd line player deserves some run with the top line, EGA is less useful because in these situations, you care more about what a player has done with their limited chances. EGA is a total, you need a rate stat. I have tried to put the focus on efficiency as the gold standard for comparing two offenses or two defenses. Now it’s time to bring the efficiency concept to individual players.

Adjusted EGA is the way

Play shares, as a refresher, is my metric that corresponds to the number of times each player appears in the play-by-play logs. It isn’t great at capturing players on the defensive side, but for offensive players, it’s a good proxy for who the offense runs through. And since play shares, like EGA, captures both positive and negative plays, it’s well suited as a proxy for opportunity. Affter all, you can’t show up in the play-by-play if coach doesn’t trust you enough to put you on the field.

So EGA is my number for total production. Play Shares is my (pretty accurate) proxy for touches. Divide EGA by play shares and you get production-per-touch. Success per opportunity, which this stat measures, is basically the definition of efficiency.

One area where uaEGA can be a helpful complement to existing practice is in rewarding players with more playing time. I looked at a sample of 881 offensive D1 MLAX players over the past 6 years who had a weighted team play share of between .005 and .02 in their first season. Basically, these are the players that are not starters and do not get a ton of field-time.

I then looked at what was more predictive of their playing time in year 2: their point total or their efficiency mark (uaEGA)? As you can probably guess, points was more predictive. And considering that uaEGA gives credit for scoring, it’s even more striking. Teams, unsurprisingly, tend to increase the playing time of players who score. This is generally a good rule of thumb, but it misses something important. Scoring is not the only thing an offensive player needs to do; avoiding turnovers is another big one. But this is not captured in a point total and therefore seems to be underweighted in teams’ promotion decisions.

More research is needed to confirm this effect, but the initial work shows that even accounting for the regression-to-the-mean effects (see note below), the efficiency pay-off from promoting high-uaEGA players is not trivial. Put another way, the production benefits from moving a high-scoring freshman to the first-line are less than the production benefits from moving a high-uaEGA freshman to the first-line.

Assuming this holds up, high uaEGA is a better predictor of success in a larger role than higher point totals.

I’m not suggesting that you use uaEGA as a mathematical way to divide up playing time. But it should be a consideration. Instead of just looking at points, take a 2nd look at the uaEGA numbers and see if there are high-efficiency players who may not have scored a bunch. Efficiency is not just about raw scoring numbers; it’s about all the things that have to happen to make an offense successful.

Using uaEGA as a 2nd check on your instincts about who is playing well is a great way to pick up an efficiency edge around the margins. And who knows? It could prevent you from letting a future star wallow at the end of the bench.

Adjust for Usage and EGA becomes a player-development tool

One of the issues with traditional EGA is that it’s not useful from a coaching perspective. You just can’t go to a player and say: “hey, let’s try and get your EGA up this year.” What’s she gonna do? Start launching shots because shots and goals are the fastest way to EGA glory. (On the men’s side, they might demand to be put at the faceoff x too.)

But once you adjust for usage, then you have a metric that is more useful in identifying areas for improvement. For starters, this individual efficiency metric means that we can put each player into their percentile relative to all players. So right off the bat, you can get a sense for where a particular player ranks. That alone is a motivating factor for an individual, and it’s a way for coaches to light the proverbial fire underneath someone.

But it’s not just about ranking players because, again, that’s more of a fan thing than a coach thing.

If I were a coach, here is how I would use uaEGA in my one-on-one player development efforts. A low usage-adjusted EGA value means that a player is not making the most of their chances. And remember, a low usage-adjusted EGA might be masked by the more traditional metrics like goals, points, shooting percentage, etc.

But if you can identify those players, then you can start to drill down into their statistical profile to understand why. Is it a turnover issue? Then your coaching and guidance becomes more focused on that. Is it a shooting accuracy issue? Then perhaps that’s how you spend your one-on-one time with that player. Even just watching film and having these numbers in mind, you will probably see things that you hadn’t seen before.

Additionally, as we have talked about, uaEGA in low-share players can be a great way to give a kid the confidence to take on a larger role in the offense. It’s easy to defer to others with higher point totals, but that may not be the best thing for an offense.

Where a low-uaEGA mark can be a sign of trouble, a high-uaEGA mark may not be obvious to an individual who has been conditioned to think in terms of points. Developing players is such a huge part of building a strong program over the long term, and part of that is helping younger players grow into the roles you’ll need them in down the road.

And the winner is…

Ok, ok, so you are wondering what the numbers say. Who are these diamonds-in-the-rough players?

Well, before we get to that, one thing to keep in mind: anytime you start to adjust metrics according to some sort of rate, you end up with weird sample-size related complexities. Take this new usage-adjusted EGA metric. If you take a very broad definition of who qualifies, your 2020 leader in D1 WLAX leader was Morgan Bartlett of Monmouth.

Her usage-adjusted EGA worked out to an astounding 31.42, thanks to a spotless 2020 season. Literally. Bartlett finished the shortened ’20 campaign with one goal on one shot, with zero turnovers. So her sky-high uaEGA rating is mostly a product of her very low usage rate and the fact that her one shot happened to go in.

I hope this demonstrates the need for a cut-off requirement to be eligible for a ranking. It’s the same thing that MLB uses; you can’t qualify for the batting title unless you’ve had a minimum number of plate appearances.

So I’m going to set a (somewhat arbitrary) cut-off at 1% of a team’s play shares. That typically works out to to the 15th or 16th spot on the depth chart. So it’s a fairly broad definition.

Anyway, with that cut-off in place, here are the top 5 uaEGA players in D1 MLAX from last year. A few household names and a few not so much. Interesting to see Bryant have 2 of the top 5 most efficient players in the nation last year.

And here are the top-5 from last year in D1 WLAX. Seriously, what is going on at Bryant?

A Note on Regression

I wanted to point out one interesting thing about uaEGA. Because it’s a useful metric when evaluating players without a lot of playing time, it is also influenced more by that terror of small sample sizes: luck. And when we look at low share players and how their uaEGA changes from year to year, there does appear to be a clear regression-to-the-mean effect. Players with a low uaEGA in one year tend to see their uaEGA rise in the following year. Players with a high uaEGA tend to see it go down the following year.

But lest you think that this means it’s a noisy metric without value, consider the role of experience. Across thousands of players, there is a very clear pattern of improvement in uaEGA. Simply put, uaEGA increases with experience; the longer a player has played, the higher their efficiency rating tends to be. From year to year, here’s how the average uaEGA increases:

Clearly, uaEGA is capturing something important about a individual player’s efficiency. Granted, more research is going to be needed to understand this stat fully, but it’s clear that a decision-making process that includes uaEGA is better than one that doesn’t.