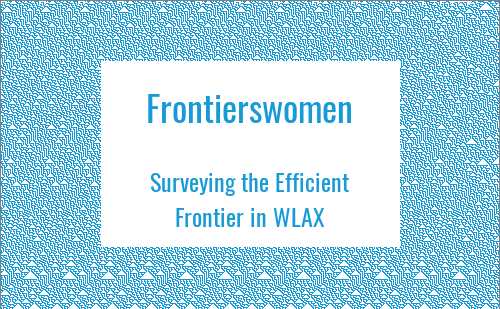 A few years ago, I wrote about the concept of the “efficient frontier” and identified where it fell in MLAX. The efficient frontier is made up of individual game performances that are collectively the “best ever.” This type of model defines “best” through absence. Specifically, the absence of another game where a player had more ground balls, more goals and more assists.

For those visual learners, the efficient frontier looks like a dome over the universe of individual player games if each game is plotted in three-dimensional space.

It is a fascinating concept for 2 reasons. First of all, it’s hard to do everything well. Notching an assist necessarily means you didn’t score a goal. Players who are doing a lot of scoring are often not in position to pick up a lot of ground balls. It’s the trade-off inherent in different roles that results in the dome-like imagery above. And it makes it a more interesting concept than a traditional leaderboard that highlights the best performances but only on a single dimension.

Let’s put some faces to the numbers. For D1 WLAX, who are the players that have staked a claim on the efficient frontier? Those select few with games so memorable that they qualify under this most stringent of criteria?

I was surprised to see there were not a lot of household names. That’s not to say that there weren’t any on the list at one time. Kenzie Kent, Kayla Treanor, Zoe Stukenberg; at one point or another, all 3 of those players had games that counted as efficient frontier games, but those games have since been knocked off the list.

Where are all the new frontierswomen?

Here is the strangest fact about the current state of the WLAX efficient frontier: the last game to qualify was Monica Borzillo of Cincinnati on Feb 10th, 2019. That’s right, it’s been nearly 3 full seasons since anyone managed to break onto the efficient frontier.

Given the players that have dominated the headlines recently, it’s at least a bit surprising that none of them have recorded an efficient frontier game. Take Charlotte North for example. In 2019, she had a game where she had 7 goals and 6 ground balls. But she only had one assist, which means that the Monica Borzillo game blocked her entry. Don’t get me wrong, 7 goals, an assist and 6 groundballs is an amazing stat line, but it’s not on the frontier.

I’d hate to think that the efficient frontier is unattainable going forward (more on that below), so here’s hoping that 2022 sees someone fill a gap and join the list. If you were to try and design an attainable stat line that would qualify, 3 goals, 6 assists and 5 gbs is probably the one that comes to mind. This particular efficient frontier stat line has occurred in 3 of the 9 remaining WLAX cases (Dolan, Hyatt, Zophy).

A stat for the people

Another curious fact here is that the lower-tier teams of D1 lacrosse are over-represented in the efficient frontier games. The 9 games came from the following teams: Cincinnati, Jacksonville, Longwood, UMBC, VCU, Albany, Kennesaw State, Marist. Not the teams we are used to seeing on our TVs or on Championship Weekend.

My theory here is that because lower-tier teams often have less depth, their stars are playing more and are forced to take on a larger role. Higher play shares means inflated stat lines. At least in a way you wouldn’t see in MLAX.

Does that also play a role in not having had any new efficient frontier games for several years? Hard to say. But there is reason to think that there is. And it’s due to the fact that the talent-poor lower tiers appear to be a thing of the past. Over the past 7 years, the number of players showing up in the box-score has been steadily increasing

So the average WLAX game has featured nearly 4 additional players (between the 2 teams) over that time period. Either the field-worthy talent pool is increasing or coaches are just being more attentive to resting their stars. Either way, the opportunity for a player to rack up a crazy stat line is going to be diminished.

That doesn’t mean that we’ll never see another efficient frontier game; it just means that a player would have to be that much more special in ’22 to make the list.