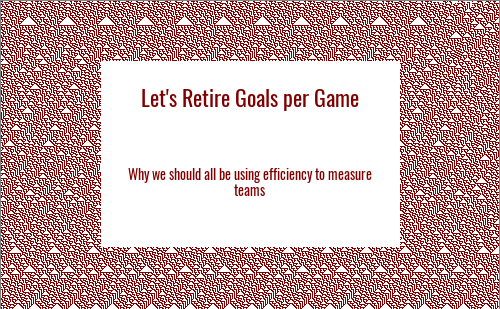 Baseball fans will be familiar with the rise and fall of the RBI. For those not familiar, runs-batted-in is a stat that gives a player credit for every run that scores as a result of their at-bat. On the face of it, this is a reasonable stat; runs are really important. Why wouldn’t you credit the players whose actions directly resulted in their team getting more of a good thing.

And for literally hundreds of years, we were OK with this. The RBI was arguably the stat that determined the AL and NL MVPs.

In large part, this was due to the fact that baseball stats were pulled out of newspaper box scores and aggregated by the league. RBIs were a good way to differentiate between who scored and who caused the scoring that was also easily included in a newspaper box score where space was at a premium. The circumstances around a run were simply lost.

Then, one of 2 things happened, the second more likely than the first. It’s possible that the baseball cognoscenti got together, weighed the pros and cons, and decided that RBIs were the best measure of a player’s value. More likely is that people noticed that the best players tended to have the most RBIs. Either way, the status of the RBI was cemented.

But then people started asking questions. They noticed that players who batted in particular spots in the line-up had more RBIs. They thought it was weird that you got credited with an all-important RBI when you killed a no-outs bases-loaded rally by grounding into a double-play. They realized that players do not control how many runners are on base when they come up. Fewer runners on base means fewer RBIs after all.

Eventually, two things happened. First, many people realized that there was a more useful stat right in front of them in the form of on-base-percentage. (This had the added benefit of kicking off a search for even more useful stats.)

Second, the internet led to a massive increase in the data available to use as raw material in creating stats. All of a sudden, it became possible to evaluate players on an apples-to-apples basis. The contributions of a lead-off batter who rarely had runners on base could be compared with clean-up batters who often did.

Eventually WAR (wins-above-replacement) displaced RBIs and every other metric as the most predictive of MVP voting. And, I would argue, baseball fans finally had a better way to separate the wheat from the chaff.

Fundamentally, WAR accounts for the number of opportunities a player has. It provides context that makes the overall production of a certain player easily comparable with the production of every other player.

This is a good development.

It’s actually a rather fuzzy use of the term “Moment” to describe these sorts of shifts. In reality, a small number of people have novel ideas. They refine those ideas and they spread to early adopters. Eventually, and usually after some resistance, the ideas become accepted wisdom. Of the 3 stages, lacrosse is firmly in stage 2; the “Moment” has begun.

Credit where credit is due. Patrick McEwen, Jesse McNulty, Joe Keegan, Brian Coughlin, Michael Mouboussin; these are the people that first started asking the questions that challenged the received wisdom. (Apologies to those I’ve missed. Please let me know so I can update Lacrosse Analytics Mount Rushmore.)

Teams are less outspoken in sharing their ideas around better metrics for good reason. But several teams that are in the vanguard as far as smart use of stats include Virginia, Villanova, Lehigh, and Ohio State on the men’s side and Denver in the women’s side.

I am, as they say, standing on the shoulders of giants. But given the audience that LacrosseReference has, I feel an obligation to help bring about phase 3 of the transition.

As the RBI has been removed from the pantheon of baseball stats, if there were one stat that I could demote from the lacrosse conversation, it would be goals-per-game.

Look, I get why GPG is cited. It is easy to calculate. And even more so than RBIs, the relationship with winning is clear. If you have more goals in a game, you win. If you are trying to compare two teams, either on offense or defense, the number of goals they scored or allowed on a per-game basis seems reasonable. And anyone can add up a season’s worth of goals and divide by the number of games.

Frankly, when lacrosse was in a world of data-scarcity where the box-score was the only available raw data, it was the best metric available.

We are no longer in a state of data-scarcity.

So can we please ditch GPG as a measure of effectiveness? There is a better way and it is efficiency (goals divided by possessions).

As WAR gave us an apples-to-apples comparison, efficiency does the same by putting the goals-per-game average in context. The exact number of goals you score or give up is determined by 2 things: the skill of the unit AND the number of chances they had to score (or be scored on).

We have possession counts; let’s use them to adjust for the impact of that 2nd factor. If we adjust goals scored/allowed by number of chances, we are left with the thing that GPG is commonly used to describe: the skill of the unit-in-question.

And we aren’t talking about trivial differences here. There were 65 D1 MLAX teams that played last season. We have the goals-per-game ranking and the possession-adjusted efficiency ranking for all of those 65 teams. Take Villanova as an example. Judged by goals-per-game, the Wildcats offense ranked 20th (13.2 GPG). Not bad, not great for a Big East and NCAA contender.

But remember, goals-per-game is heavily influenced by how fast a team plays, and Villanova played at the 41st fastest pace in D1. That meant that their offense had 39 chances to score each game. Compare that to a team like LIU, whose offense had 47 possessions per game.

Aiming at the Right Target

At the end of the day, we are talking about reputation here. In one sense, this matters a very small amount; in another it is huge.

As fans and observers, knowing that a team has the 17th best offense vs the 24th best offense is not a huge deal. It’s not as if a team can be 50 spots apart comparing GPG vs efficiency.

Certainly more accurate information is better information, but the effects are not huge in isolation.

But there are aggregate effects here, in the form of incentives, that do matter. If you know that teams are compared based on GPG, then whether you acknowledge it or not, on some level, coaches are incentivized to optimize for GPG.

But this reflects a bigger-is-better outlook, when the real target is better-is-better. It is easy to juice your GPG rating: just play faster. Of course, this is not the best strategy for all teams.

I’m fascinated by the steps that lower tier teams can take to reach the top tier of college lacrosse. If the lacrosse media relies on a metric that incentivizes teams to play in a way that may not maximize wins, then the use of that metric can plausibly be said to work at cross-purposes with parity. Personally, as a fan of parity, I think this is something to argue against.

Ok, if a bunch of college coaches email me to say that they already focus on efficiency metrics, I’ll delete or amend this post.

But knowing human psychology, if the lacrosse media evaluates teams on the basis of GPG, I’m skeptical that programs are totally able to block that out. I could be wrong, perhaps phase 3 has already reached college programs. But if not, what might it mean to shift focus from GPG to efficiency-based metrics?

I think in general, you’d see a better allocation of resources by teams. If you assume that coordinator A is trying to get a head coaching job, and the main metric for evaluating offenses is goals-per-game, then what is that coach’s incentive? It’s to maximize the number of goals that his offense scores.

How does one score more goals? There are 2 ways. You can build a better offense (better efficiency/system) or you can simply give your existing offense more bites at the apple (faster pace). Switch to the alternate universe where we only care about efficiency and the incentive to juice scoring by going faster disappears. To get noticed, the only option left is to build a better offense.

Another way to think about resource allocation is to think about personnel. If you care about maximizing goals, then you might be biased in favor of the athletes who can get up and down the field and play at a pace that results in more possessions. If we allow that there is an optimal offensive lineup for efficiency and a different optimal lineup for pace/GPG, the current incentive structure puts a thumb on the scale AGAINST a team’s best offense (i.e. for winning games).

I’m not suggesting that we would see some sort of revolution in college lacrosse. The picture I’ve painted is a lot more black-and-white than reality. My intent here is to demonstrate the inefficiency of the GPG paradigm by showing contrasting, albeit exaggerated, scenarios. But I think the sport would be better if efficiency were the target by which we all judged teams.

I often try to end my essays by examining the flip side of any argument I’ve been making. What is the potential pitfall for a team I’ve been gushing about? What are the stumbling blocks in making use of a new stat I’ve created? Things like that.

So in this section, I’ll take the opposite side and argue for why we should keep goals-per-game and ignore efficiency. Here goes.

Forget it, there is no good reason why anyone should cite goals-per-game ever again. Thank you for coming to my TED talk.

If you found this interesting, you might think about signing up for the LacrosseReference newsletter. No better way to stay on top of what’s happening in the world of lacrosse analytics.