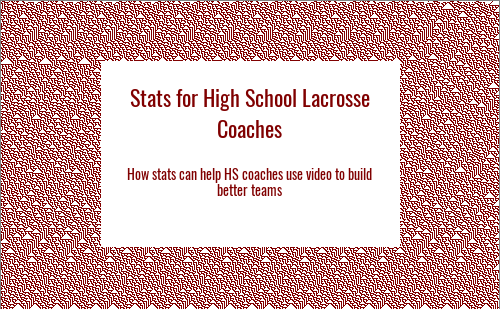 March 31, 2022 update: LacrosseReference PRO: DIY is here. You want your kids to develop, to have fun, to become better lacrosse players and people. I’m sure you are up against some programs with better equipment, better athletes, or more resources. But they probably don’t have LacrosseReference on their side.

Athletes and equipment are just two of the pillars of a strong program. Use stats to coach smarter and get the most out of your situation. If you know how to use them, better stats make it more fun to play and coach this great sport. PRO makes it easy to get them.

At first blush, it may not seem that high school lacrosse coaches should spend much of their limited available time scouring college lacrosse stats. Very few are full-time with their programs in the first place, so time is probably not a luxury they enjoy. And why would you spend time digging through numbers when you could be coaching your kids?

But this misses an important fact that some coaches at the high school level have figured out: stats can be a gateway to using the college game as a coaching tool. Far from stats requiring a bunch of your time for an uncertain pay-off, stats can be a powerful force multiplier for the coaching (and teaching) that you are already doing.

How can I be so confident of this? It’s simple, because stats are the missing link between what you already know and what you want your players to know.

Think of it this way. You have a general strategy that you want your team to execute. Maybe you have a really cerebral group of kids and you want them to focus on generating the best shots they can through a series of quick passes. Maybe your defenders could stand to be a bit more aggressive in attacking opposing offenses. Maybe you have some shooters who need to be more…judicious…in their shooting choices.

Regardless of what sort of approach you’ve settled on for your team, there are 2 things that divide successful teams from less successful teams. The first is the players ability to execute the tactics that the team has settled on. We hear about execution all the time (especially in losing coach press conferences).

But the second, and at the high school level, more important factor, is whether the kids understand the strategy in the first place. How confident are you that your players really understand what you are asking them to do?

Here’s what I’m recommending. High school lacrosse coaches should use specific teams and players from the college ranks as models for their own players. When high school kids watch video of these teams and players it serves to “show” them what their coaches want them to do rather than just being told.

And just like Netflix has more movies and shows than anyone could ever watch, there are more college lacrosse games than anyone should ever watch. Even more to the point, not every team is going to be a good model for a given high school team. If you are coaching the Little Giants of your high school conference, it may not be advisable to use the athletes of Syracuse as a model for them.

And that is where the “stats” part of my argument comes in. As Netflix has their recommendation engine, you can use stats to “recommend” the best college teams and players to use as models. Stats can help narrow down the teams to just those that match your team stylistically. From there, stats can identify those teams that use your style of play most effectively.

The point is that you have limited coaching time. It wouldn’t be wise to slog through hours and hours of college film to try and pick out useful examples of situations that would be good training material for your own players. But if you make smart use of the stats, you can quickly narrow in on the teams, games, even players that would be the best models for your team to aspire to.

Ok, so in practice, how would an enterprising coach implement this new tool into their arsenal? Let’s take that first example above: generating good chances out of patience and passing.

Enter the Dragon (of statistics)

I need someone to make a variant of that Drake meme where he’s pushing away one thing and smiling and pointing to another. The top (rejection panel) would read “I want 6 passes before any shots.” The bottom panel would say: “Be like Lehigh.”

It’s easy to say that we need to be more patient in generating offense. But in practice, patience can easily morph into a lack of aggressiveness and maybe even shying away from good opportunities to create a scoring chance. So how can a player that wants to get better really internalize that fine line between a lack of aggressiveness and patience?

As laid out above, I think one part of it is to have them watch players and teams at the college level that do it really well. And how do you tell them which teams to watch and learn from? You use the stats.

In my intro, I mentioned an archetypal team that wants to control possession and get good shots through lots of passing. To identify a good model team, you need a squad that

In general, taking longer to generate shots is correlated with higher turnover rates, so the trick is finding teams that can get good shots while still avoiding the turnovers that can pop up in high-passing offense.

If we look at the D1 WLAX teams from last season, there were 3 teams that ended up in the top 30 most patient teams and were also top 30 in shooting percentage and turnover rates. Two were household names: Boston College and UNC. The other was Navy. And just like that, you’ve got 3 teams that you can tell your players to keep an eye out for. Watch a few of their games and you’ll see specifically what their offenses do to generate good shots while not rushing.

You can’t really demonstrate effective patient offense to a team that does not possess it. But you can show them; or rather, you can let Boston College, UNC, and Navy show them.

On the men’s side, the technique is no more difficult, although it does generate just a single role model: the aforementioned John Crawley-coached offense. Lehigh was the only program in D1 MLAX to finish among the 10 most patient teams and to also have top 15 offenses in both shooting percentage and turnover rates. If you want to develop a more patient offense without sacrificing efficiency, you could do worse than telling your team: “Lehigh plays Saturday at noon; go watch their game and tell me 3 things they did well.”

And how much time did that take you? Exactly.

It works for individualized coaching too

Or maybe you are in a situation where you are trying to nudge specific players to either adopt or avoid certain tactics and behaviors. It would be a fair criticism to say that team-level role models may not be as effective in this situation.

Let’s take a specific scenario where you have a strong player, great athlete, who doesn’t always take the best shots. If this is a high-usage player within your offense, that can be disastrous for your overall efficiency. If the issue were shooting mechanics, you’d be able to pick up a stick and model what you want them to do. I suspect they’d be able to take that teaching and make their own adjustments. Problem solved.

But if the issue is more about shot selection, how do you teach that? You can just tell a player that they need to take better shots, but if they knew how to do that, wouldn’t they already be doing it? You can only explain so much with words and film. But what if you could also say: “hey Brayden Mayea and High Point are on tonight, go watch which shots he takes and which shots he could take but doesn’t; let’s talk about what you see on Monday.”

Why did I pick Brayden Mayea? Because when you look at the player stats from last season, he’s one of 3 guys who had:

Excess-goals is a measure of how many goals a player scores above and beyond the “expected” number of goals you’d estimate based on the shots they took. It’s hard to have a positive excess-goals mark if you aren’t taking good shots and avoiding bad shots. Exactly the kind of role model you’d want player X to tailor their game after.

And if you don’t buy excess-goals as a relevant marker of a judicious shooter, the other 2 guys included Michael Boehm of Michigan and the 2021 Men’s Tewaaraton winner Jared Bernhardt of Maryland. I don’t think it’s fair to tell a high-school kid to try and play like Jared Bernhardt though.

Look, your mileage with this concept will vary. Not every coach is going to be able to identify an area of improvement in a given player and effectively use the stats to identify the best role models in the college game. Skip the individual aspect of this if it makes more sense for your program.

That said, I do think that any high school coach can at a minimum identify an effective college team that plays with a similar style. And it’s such a low-cost tool to incorporate into your arsenal of coaching skills, why wouldn’t you.

What I’m not saying

Can stats alone help your team play better and win more games? No, they cannot.

Stats have the same limitations as any teaching tool. They aren’t magic. To work, they need a receptive audience that is willing to learn from them and adjust how they approach the game.

That means that they are not for everyone. I wouldn’t suggest any coaches send their players to lacrossereference.com to get better. You need to have the self-awareness to know where your improvement points are. You need to have a coherent strategy instead of blindly relying on numbers to set tactics. If your players aren’t willing or able to take the time to watch a college lacrosse game, then you can just wipe this essay from your brain.

But if you have a team that is willing to take coaching, stats can be an easy and effective way to identify the teams that model the behaviors you want your team to adopt. Every coach knows that showing is more effective than telling. The smart ones know that college teams are a great way to “show” their team what they want from them. And stats are the key to make that feasible.

Anyway, I’d love to hear how this concept lands with you. Are you a high school coach? How do you use data and incorporate statistics into your program. Inbox is always open.

And a huge thank you to Kyle Devitte, Craig McMichael and the other high school coaches who read this article and provided their feedback.

Have you checked out PRO yet?