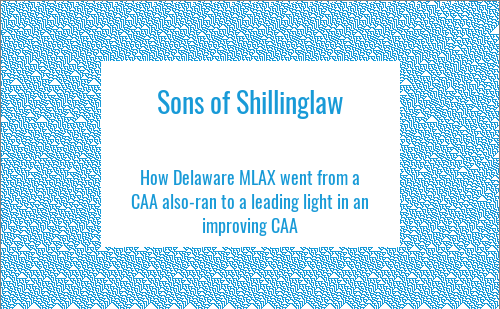 I was perusing some of the new visualizations and infographics that I have created for the LR Embedded toolkit, and I stumbled on a graphic that really caught my eye. It has to do with the Delaware Blue Hens.

That blue line represents the transformation of the Delaware Men’s lacrosse program from one of the worst teams in Division 1 to one of the best. When Delaware’s 2016 season came to a close, their LaxElo rating was 1356, good for 64th in D1 MLAX. Fast forward to this season, and the Blue Hens currently sit in 12th nationally.

They didn’t get much love in the bubble conversation after bouncing out of the CAA tournament, but they ended with the 14th ranked Strength-of-Record and the 18th best RPI in the country. Take away the opening game loss to MSM (when the Hens were missing a lot of their offense) and this easily could have been an at-large team.

I obviously follow the non-RPI rankings pretty closely, so I knew that Delaware made it to fringe bubble team status last season. Add in the highlights from Mike Robinson’s sharpshooting, and I suspect that a lot of the lacrosse world knew something about Delaware’s 2021 success. But until I saw that Lifetime LaxElo graphic, I did not appreciate the journey that the program has been on for the past 5 years.

If you have followed my site at all, you’ll know that to me, data provides the clues that a good story might lurk underneath an otherwise unremarkable facade. So let’s take this clue in the LaxElo chart and talk a bit about what’s gone right with the program. And maybe a bit about where they go from here.

I think it’s helpful to set the stage here by looking at what the headline story is for Delaware. Statistically, their offense was their best unit. And overall, they were a top-20 team everywhere except faceoffs where they were slightly into the bottom half of D1.

And these rankings are adjusted to account for the strength of the opponents that they faced. This is important because, overall the Blue Hens slate in 2021 ranked 42nd nationally. Compared to some other CAA teams (Towson was 13th and Drexel 24th), Delaware did not face a murderer’s row. Still, after the downward adjustment, they still ended up with top-20 units.

Bottom line, it’s not a stretch to say, sure, marginal bubble team.

But this obscures the trend, and that after all, is the point of this essay. The faceoff unit in 2021 reached highs last seen in 2019. And the save percentage ranking is actually down from a heady 4th nationally in 2019 and 16th last season. This is not an across the board thing with Delaware.

True, the offense in 2021 was the best Blue Hens unit since I started tracking this information. However, I would put forth the defense as the biggest key in the Elo trend I showed above.

When Delaware was wallowing in the bilge tank of Division 1 lacrosse, their defenses were just getting shredded. In 2015, they allowed goals on nearly a full third of their defensive possessions (32.4%). From 2015 through 2018, their average opp-adjusted defensive ranking was 46th nationally. Since 2019: 12th.

Ben DeLuca has been the head coach (and my perception is the main defensive mind) since 2017. Whatever changes and systems he’s put in for the defensive unit in Newark, they have paid dividends. In his first season, the Hens had the 4th best defense in the CAA. They jumped to 2nd in ’19 and have been first in the conference (measured by raw efficiency) over the past 2 seasons.

It’s sometimes helpful to break down the components of defense to understand what they’ve done well. First and foremost, this is not a team that relies on turnovers to get stops. They turned over opponents at a 37.5% clip last year (35th nationally). Instead, they were pretty good at preventing opponents from generating good shots and then pretty good at stopping the shots they faced. And relative to the turnovers they caused, as a team, they managed to avoid penalties (Delaware had the 13th highest ratio of caused-turnovers to penalties last season).

I measure good-shot-prevention via a model called Excess Shooting, which assigns each shot a probability of being a goal based on a series of factors. This expected shooting percentage gets aggregated for each team and the Blue Hens ended the 2021 season with the 12th best mark (26.9% eShooting%).

Their keepers ended the year with the 19th best save percentage and the defense overall ended ranked 17th. So you have defensive ranks of 12th, 19th, 17th; all pretty consistent numbers. It’s not like the defensive system was either bailed out or let down by the goalie play on the back end. Just a solid, system defense.

Now, the defense has improved, over the years, but there is another stat that helps explain the success the team had in 2021 specifically. Hard-to-calculate, and so often overlooked, that stat is possession margin. In 2021, Delaware had 23 more offensive possessions than their opponents (an average of nearly 2 more per-game). This placed them 20th in the country and 3rd best in the CAA.

Now, on the face of it, an extra 1.76 posessions/gm doesn’t sound like much, but consider this: 2021 was just the 2nd time since 2015 that they ended the season with positive possession margin. In 2019, their opponents had an extra 2.3 possessions per game. With an average offense around 28% efficiency, a 2.3 possession hole works out to .64 goals per game. But comparing 2021 to 2019, they were effectively 4 possessions better last season.

A big part of the reason for the improvement since 2019 has been the faceoff game. The Hens have not typically had a strong faceoff unit; they’ve not cracked 50% at the stripe since at least 2015. But as with many things in life, it’s relative. The 2021 unit was the 38th ranked opponent-adjusted faceoff unit, which doesn’t sound that great until you note that they were 60th and 61st in the two prior seasons.

As we will see with another aspect of the 2021 success, the possession margin improvement comes with a qualifier. Jake Hervada took the majority of the Delaware draws last year, and he has since moved on. Hervada was never a top-20 FOGO, but the fact remains that he was the best guy they could throw out there.

And his improvement between 2017 and last year was most of the reason that the Hens possession margin improved. His faceoff Elo rating saw a fairly steady march up the table over time (he ended ’21 as the 33rd rated faceoff guy nationally). Now they are going to have to turn to a less experienced set of FOGOs.
Jake Hervada: Career

Of the 3 returning FOGOs listed on the UD roster, Logan Premtaj has the next highest fElo rating (68th among qualified players last year). Whether they continue to mix in Hockenbery or not, I’m guessing that for the Delaware offense to maintain its possession edge, Premtaj is going to need to fill some Hervada-sized shoes.

This was an experienced team. Robinson was a sophomore, but the 3 highest assist-share guys were Kitchen, Kurtz and Bieda. And Kitchen was the jewel in the center of the crown. He ended the season with the 17th highest EGA/gm average in D1 MLAX. And as you can see in the graphic, he managed metronomic improvement in his efficiency over his career.

Between losing Hervada and Kitchen to graduation, the Hens are losing the guy that earned them a possession advantage and the guy that accounted for 26% of their assists. Tye Kurtz seems well-positioned to pick up some of the slack, but then that means the coaching staff needs to work someone into his role and it’s not as clear who that person will be.

If you are a glass-half-empty type person, you might look at 2021 as the ceiling for DeLuca’s squad. When you lose high-usage, highly successful players like Charlie Kitchen, a drop-off can seem inevitable. What are the odds that the players who are up next will be as good?

If this is where you think the Hens are headed, you might be pointing at what happened at Penn State after Grant Ament graduated.

But I think that view of the world discounts systems and coaching staffs which transcend generations of players. And remember, this trend has been a long time in the making. Sure, Charlie Kitchen has been around since the depths, but (no offense to him), I don’t think this is the story of a class of players coming to a school and being wholly responsible for the turnaround. (It never is.)

As a clue, take a look back at the LaxElo chart that I opened with. I drew your attention to the Delaware blue line, but take a careful look at the red line as well. That shows the CAA as a whole and you can see that it too has been on a pretty steady upward trajectory. The Delaware story is, in reality, one part of a larger story in the CAA. So the class that has just graduated is a piece of a piece of the story.

Delaware, as well as the rest of their league compatriots, has an advantage that only a few conferences have: consistent chances to play against tournament quality teams. They aren’t quite there yet in full, but if the conference is able to continue the march upward, you’d expect the rising tide to lift all boats.

Add in the track record that this coaching staff has put together over the past 5 seasons, and I think that optimism is called for. The arc of a team truly trying to break into the top tier of college lacrosse is one of the more entertaining things that we as fans can look forward to. And in 2022, we are going to see whether Delaware (and probably Lehigh) has what it takes to do what Albany, Loyola, and only a few others have done.