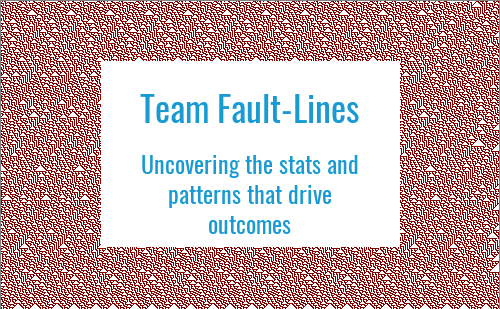 Sometimes, in the conversations I’ve had, the following question comes up: “we’ve got Team X next; what’s the one thing I need to know to help us win?”

And frankly, I haven’t really had an answer. Traditionally, LacrosseReference has been about descriptive analytics. Who’s got the best offense? Which players are underappreciated? How do team rankings shift when you apply certain situational filters?

The PRO site has tried to remedy this in a few ways. Showing a FOGO’s win rate by quarter can help faceoff strategy for example. I also show a FOGO’s win rate against a team’s primary vs secondary FOGO in case there is an opportunity to gain an edge by sporadically throwing out a new look.

I’ve also got a graphic that shows an opponent’s offensive and defensive efficiency marks by possession length. That gives a sense of what they’ve done to date, but in general, these types of insights aren’t actionable in the way that the opening question is looking for. Interesting? Yes. Game-changing? No.

The Do’s and Dont’s of Data

Look, data and analytics is not going to turn a loss into a win. In most cases, you are just trying to pick up enough small edges that over the course of a year, you might end up with 2 or 3 more wins than you would otherwise. An edge can come from coaching (moving someone from the 2nd to 1st midfield line). It can come from recruiting (getting the right player to fit a need/philosophy). The mission of LacrosseReference is to help teams add data/analytics to the list of places an edge can come from. And today, I’m going to describe a new way to gain an edge.

For lack of a better name, the below is in my mind as Player-Outcome-Splits. In English, it means looking at team-level outcomes and seeing how they differ when certain player-level milestones occur (or don’t). A team-level outcome is either win-loss or offensive/defensive efficiency. A player-level milestone might be shots taken or play-share (like a usage rate). For example… 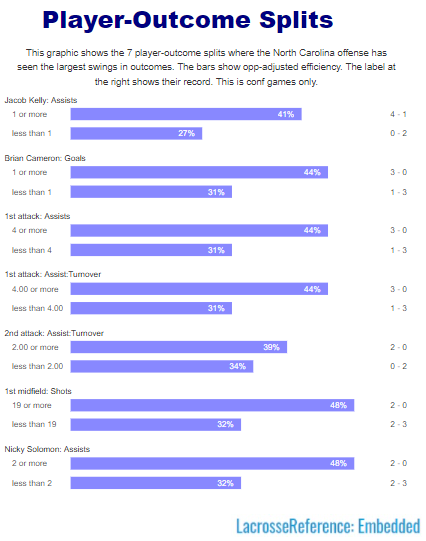 I’m not going to try and read the tea leaves and provide a strategic interpretation based on that nugget. But if you are a coach planning to play the UNC offense, that’s a useful piece of information. When things went well for the Heels, their 1st attack played the distributor role.

We can also look at things for individual players too. National champs Boston College provide us with a good example. When Courtney Weeks scored at least one goal, Boston College won 11 of their 12 conference matchups including, of course, the national title game against Syracuse. When Weeks didn’t put any shots past the keeper, the Eagles only won a single game in 3 tries. 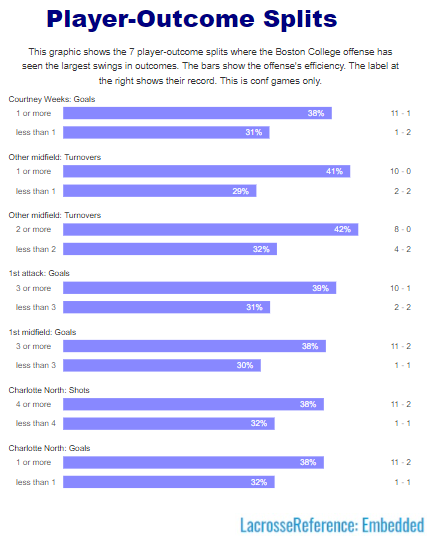 Without a stat like this, the task, as a defensive coordinator is: how do I slow down the BC offense? In reality, you probably just substitute: how do I slow down Charlotte North? But as this shows, that may not even be the critical factor. Perhaps when North was given extra attention, she just found players like Weeks to do the scoring. In fact, in the 6 games when teams managed to hold CN under 4 goals, BC still won 4 times. She was going to get her points, regardless of what the opposing defense did.

With player-outcome-splits, you get right to the heart of what drives outcomes for a given team. In the case of BC, you can watch film and game-plan with a more specific question in mind: what is it about Courtney Weeks’ production that drives their offense to flourish or stagnate? Answering specific questions is always easier than answering vague questions.

Offensive coordinators, do not despair; this methodology can be useful for you as well. Georgetown MLAX ended the year with the top opponent-adjusted efficiency mark on the defensive side. But even they had splits that suggest the best ways to attack their offense. (I’m including all of the Hoyas’ games here so that we can capture the UVA matchup in the tournament.)

Again, it may sound intuitive that more assists leads to better outcomes, but that’s not always the case, and it’s not going to be the case to the same degree for every opponent. This suggests that you can’t beat Georgetown by just going hero-ball and having a bunch of individual goal scorers going unassisted. Relative to other teams, making the offense work as a system is especially crucial against Georgetown.

Compared to some of my other models, this one is actually very straightforward. The complexity is in identifying the groupings of players into unit and player-roles, but that’s all done elsewhere.

To calculate the actual player-outcome-splits, we have two tasks. First we need to calculate the actual difference in win percentage and efficiency above and below the split point. Second, we need to rank all those potential splits by importance. This second step is critical; it’s how you prioritize resources (read: prep time) to try and gain the largest advantage going into a given game.

The first step is straightforward. For a given player, take all the games included in the sample and line them up by the metric in question (i.e. shots taken) from least to most. Then, for each point in that line, calculate the team’s winning percentage and efficiency (goals divided by possessions) for the games that fall above and below the line. This gives us a huge table of every combination of player/player group, statistic, and split-point. For a given team, that means there are thousands (sometimes hundreds of thousands) of different potential key factors.

The key to making this actionable is by ranking each split-point according to the gap in performance above the line and below the line. In order to rank these, we have a formula in place that is 5 parts efficiency and one part winning percentage. So, for example, in the Weeks example from above, the split in efficiency was 7 percentage points (.07) and the difference in winning percentage was (11-1) – (1-2) OR (92% – 33%) = 54% (.54). We divide that by 5 to get .11. Add them together and the importance of this particular split point (whether Weeks scores or not) comes out to .18.

This number itself doesn’t mean anything by itself; it’s a relative thing. But after doing this calculation for each of the thousands of potential key factors, we rank the table and, voila, highlight the most important ones.

If this model always spit out an “insight” that for every team, their leading scorer scoring goals is a key metric in whether they win or lose, it would be useless. The value comes in the fact that every team has a different set of key factors. As I said above, knowing the key factor isn’t enough to make a tactical decision and bam, the victory is yours. But when you have a coach that interprets the results and incorporates them into their overall process, it becomes a useful tool in the arsenal.

As with any data insight, this is not going to be the difference between a 10-win Championship Weekend season and a 5-win season that ends without a conference tournament berth. But it’s an extra “edge” that smart teams can pick up along the way. And in a world where the margins in May are so thin, that can make all the difference.