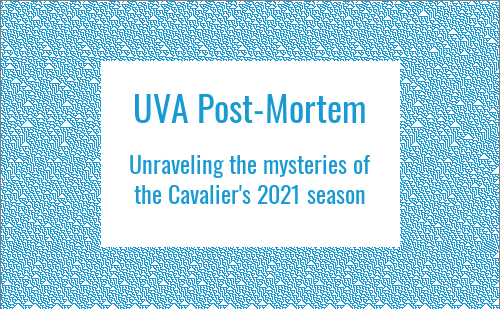 The confetti has been swept; someone has replaced the net that the Hoos cut to shreds. The season is over and the title has been defended.

As I think back to the 2021 MLAX season, it feels at once incredibly strange and exceedingly normal. Almost daily reschedules are something I hope to never deal with again. But at the end of it, we had a full tournament (basically a full season) and a photographed scrum with a grinning Lars Tiffany in the middle of it.

I feel gratitude to the players and coaches who soldiered through COVID protocols and restrictions. And to the SIDs who did a much better job keeping track of everything than I did. By their efforts, we were able to have a (mostly) normal season in the middle of the worst pandemic in a hundred years. I hope that I always remember how remarkable 2021 was.

But I’m not sure that I will. And that is because, even now, when “2021 MLAX season” pops into my head, the first thought that comes out is: how the heck did the same team run through the NCAA tournament like an SUV through a cornfield AND manage to lose twice to Syracuse, once by 10 goals?!?!?!

If I’m going to properly reserve a place in long-term memory for the wonders of 2021, I am going to need a satisfactory answer to that question. Otherwise it’s going to nag me forever.

Cuse vs Everyone Else

To recap for those who’ve put the 2021 season out of mind already, the Cavs ended up 14-4. Against teams not named Syracuse, they were 12-2 (losses to Duke and UNC by 1 and 3 goals respectively). And of course, they ran through the NCAA field with wins over Bryant, Georgetown, North Carolina and Maryland in the title game. In those 12 wins, they outscored their opponents by a total of 65 goals.

Against Cuse, this was a totally different team. In the 2 losses, they were outscored 33-21.

If you take a glance at the table, the possession-based efficiencies don’t pop out at you. Certainly, the Cuse offense fared better against UVA then the Cavs’ other opponents. But the UVA offense wasn’t especially bad against Cuse.

No, what stands out is the possession numbers. Virginia won just 22% of their faceoffs against Syracuse, compared to 65% against everyone else. When they had the ball, they were ok; they just didn’t have the ball in the two matchups.

For those that question how much possessions matter, consider this. Since 2016, Virginia has won 75% of their games when they’ve had a possession advantage or have been out-possessioned by 5 or less.

And it’s not like there was some sort of effort disparity. UVA actually won a slightly higher percentage of the available groundballs against Syracuse than they did against everyone else. For whatever reason, the Cuse faceoff unit just had Petey LaSalla’s number.

If what happened against Cuse happened in the NCAA tournament, the Cavs might have lost to Bryant. Given the margin, it seems doubtful that they would have lost to Georgetown. But it’s hard to imagine them being able to get past either UNC or Maryland with a 22% faceoff win rate or a -11 possession gap.

But the good news for the Hoos’ faithful is that (obviously) it didn’t. Over the 4 games of the tournament, UVA won 63 out of 112 draws (56%). If you watch the line below closely, you’ll see that the FO unit in the NCAA tournament actually underperformed where they were for most of the regular-season (Cuse games aside). But it certainly wasn’t to the same degree as their games against the Orange.

So faceoff success is probably the reason why this team went 0-2 against Syracuse, but it doesn’t explain how they ran through the rest of the field like a hot knife through butter. Since simple explanations are usually best, you could do worse than just saying: “Connor Shellenberger.”

But that obscures the dramatic increase in effectiveness. Yes, there were more chances, but UVA would have been crazy not to ride his hot hand. In the regular season, he had a 71% SOG rate and shot 36.5% overall.

That’s pretty good; it puts him in the 77th percentile among players with at least 50 shots taken. But in the tournament, he was on another level. He shot 58% across the 4 games. This year in MLAX, there was not a single player who shot that well across the entire season.

It’s hard to pick whether the Georgetown game or the Maryland game was the crowning performance for Shellenberger in the tournament. Against Georgetown, he was great. 10 shots resulted in 6 goals, but 2 turnovers mar the stat sheet a bit. In this game, his usage-adjusted EGA was 3.58. (Think of this like a production measure that is adjusted for the number of chances he had.)

Against Maryland, his usage-adjusted EGA figure was 4.12. 4 goals on 7 shots and no turnovers. And considering the stakes in this one compared to the blowout Georgetown game, you have to give this performance the nod.

If you found this interesting, you might be interested in checking out LacrosseReference PRO. It’s my companion paid subscription site that goes 10x deeper into the world of advanced stats within college lacrosse. And it’s the best way to support the content and analysis that I publish for free here, which has not and will not ever sell your attention to companies wanting to show ads.