So far, Syracuse has a claim on ACC supremacy. We still have a while to wait before they have their lone match-ups with Duke and UNC, but the way they dismantled UVA makes the argument plausible. As it stands after their win over Stony Brook, Cuse is sitting at #9 in the LaxElo ratings.

Yes, there was the troublesome loss against Army, but even with that hiccup, this is a team that is well-positioned for the rest of the season.

This offense is very very good

Let’s start with strength. The Orange offense is very good. On an opponent-adjusted basis, they rank 3rd in the country (8th if you just use the raw efficiencies). They have scored on 36.7% of their possessions so far this year. And this represents a modest improvement over last year when they ranked 9th (again, opponent-adjusted).

I think of offense as 3 components: do you avoid empty possessions? Do you get good shots? Do you make the shots you get? Being mediocre in any of those three areas can be enough to make an entire offense mediocre. Cuse has been very good, pretty good and very good respectively.

Start with empty possessions. Not too many of them for the Orange this year. They are the #1 team in the nation when it comes to opponent-adjusted turnover rate; they’ve turned it over on just 26.6% of their possessions. And that has come against a slate of opponents who collectively force turnovers at a 2.7% higher clip than average. Ball security has historically been a strength for this team: they’ve ranked in the top-10 nationally in turnover rate in 4 of the past 5 years.

The next factor is the ability to get quality shots; we have already established that the Orange are good at avoiding turnovers, so how do they do in shot quality? Not elite, but it seems worse given the comparison the other two factors.

I quantify shot quality using an expected-shooting-percentage model applied to every shot a team takes. The model basically looks at the profile of the shots you’ve taken (i.e. shot clock remaining, time/score, man-up/even strength) and looks at how often similar shots go in, on average, across all teams. This results in an estimate, for every shot, of how likely it is to result in a goal.

The upshot is that by averaging the probabilities for every shot a team takes, you can get to an “expected” shooting percentage for the team. Essentially it’s a measure of the quality of the shots that a team’s offensive scheme generates.

By expected shooting percentage, Syracuse ranks 15th nationally. This year, their average shot has had a 31.0% chance of going in. For reference, the team with the best shot profile is Duke; their shots have an average probability of 32.6%. And within the ACC, it shakes out like this:

As a team, they’ve shot 38.5%, which is 4th nationally. But then when you adjust for the strength of the defenses they’ve faced, it actually rises to 2nd. That 7.4% excess shooting percentage makes the Cuse shooters the 5th best unit, once you account for the shot profile.

So to recap, they don’t turn it over much, the offensive scheme has generated the 15th best set of shots in the country, and their shooters rate 8th nationally. A recipe for success that is.

When you want to look for the person that drives an offense, you look at 2 metrics: play share and assist share. Play share is a lot like a usage-rate in basketball. Players with higher play shares are a more important part of the offense. Assist share is the percentage of a team’s assists that a player generates.

But if you want to crown an early-season offensive MVP, I think you have to give it to Rehfuss. He’s been the best shooter on the team so far and he’s been responsible for creating more offense than anybody else. And he’s done all of that while cutting out turnovers. He’s the Cuse offense wrapped up in one player.

For an offensive engine, the turnover rate is important. Without his improvement there, they wouldn’t have the No 1. turnover rate. But the stat that stands out for him is clearly shooting.
Stephen Rehfuss: Season

The chart plots his excess goals per shot attempt for his entire career. 2021 is, so far, his second best season by this metric. (Excess goals uses those shot probabilities from above to separate a shooter’s skill from the quality of the shot attempts they take.)

This was not a strength for Rehfuss in ’19 or last season. And given his role in the offense, net negative shooting from a top-share guy is going to have an outsized impact on the entire offensive profile. Conversely, when a top-share guy is netting an excess goal every ~7 shots, that’s huge.

In which Scanlan is compared to rocket fuel

If there is something that would take this offense to the next level, it would be a return to form for Chase Scanlan. Now, it should be noted, Scanlan has 13 points in 4 games for the #3 offense in the country. And the stats I pull from the play-by-play logs do not tell the full story. But there are some areas of his game where the 2021 version of Scanlan is still rounding into form.

Ironically, I think that what I’m seeing with Scanlan is almost exactly the same thing you would have said about Rehfuss at the beginning of last year. Take his assist share from the graph below. In 2019, with Loyola, he accounted for roughly 10% of the Greyhounds’ assists. Moving into the Cuse offense last year, that jumped up to around 12%. In 4 games this year, he’s accounted for 16.2% of the Orange assists.

That is a part of why Stephen Rehfuss’ assist share is down this year, even as the team has gone from a 52% assist rate to a 55% assist rate.

But then you have to pair that with his shooting, which has seen a drop-off this year. There is always going to be a trade-off between creating for others and looking for your own shot. It’s very hard to do both at once. Rehfuss has figured it out, and clearly, Scanlan is in the process.

If I’m Coach Desko, I’m gladly taking the hit to Scanlan’s productivity while he works himself into more of a creator role. An offense that has many guys that can do many things is always going to be more robust to whatever an opponent tries to do. Interchangeable pieces that can plug-and-play to keep an offense humming is a huge asset.

The surface story with the Orange defense doesn’t look great. They’ve allowed goals on 30.5% of their possessions, which ranks 42nd nationally. But dig deeper and you realize it’s not all bad.

For starters, they’ve played a set offenses that are collectively, a full 3.1 percentage points better than the average offense. Only 4 teams have faced a tougher set of opposing offenses.

And when you account for the strength of the opposition, their defensive ranking jumps from 42nd to 29th. That 30.5% efficiency rating is really more like 27.4%. Now, I’m not saying they are suddenly world-beaters on defense, but that 27.4% mark is better than last year (28.8%), and it’s better than 2019 (28.0%). It’s actually the best opponent-adjusted defensive rating that Syracuse has managed since I’ve tracked the stat (going back to 2015).

If I had to diagnose one issue that would bring them the most benefit, it would be turnovers. The defense has forced opponents into a measly 25.6% turnover rate, which is 65th out of 65 defenses this year. As a result, opponents are getting 1.1 shots/possession against the Orange (60th), which means a lot of action for Drake Porter in net.

The UVA game looks like a blip as that it the only game so far, where they’ve forced turnovers at a higher than 30% rate.

But despite the lack of turnovers and the onslaught of shots, Drake Porter has held up pretty well in net. The Orange have the 20th best save percentage, on an opponent-adjusted basis. And Porter has been even better than that suggests.

He currently ranks 14th in excess saves, which compares a goalie’s performance to what we would expect league-average keeper to end up with.
Drake Porter: Career

By that measure, the advanced metrics suggest that for every 11 shots-on-goal, he’s making 1 save more than we’d expect a league-average keeper to make. For the season, that amounts to 7 goals that he’s kept out of the net on his own.

If we take a look ahead, the schedule is difficult. Surprise. The ACC is a gauntlet this year. Unfortunately (for fans anyway), they only have a single match-up against Duke and UNC. In the weird ACC scheduling regime that is 2021, the Orange ended up with their double games against Notre Dame and Virginia.

At the moment, the Orange could easily end up in any one of the five finishing spots in the ACC pecking order. The simulations currently give them a roughly equal chance of ending up as the 2nd or 3rd seed. But they still have a 12.4% chance at ending up winning the regular season title. 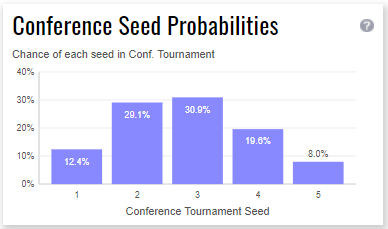 This is a weird year, and Syracuse is off to one of the weirdest starts of anyone. There aren’t many teams who’ve had back-to-back performances that were as diametrically opposite as the Army and Virginia games. I think we are still figuring out whether UVA is any good this year, so the Army game probably weights a bit heavier than the UVA turnaround.

But that doesn’t really matter because the Orange are going to have their chance to prove it against Duke and UNC later this season. Circle those dates on your calendar.