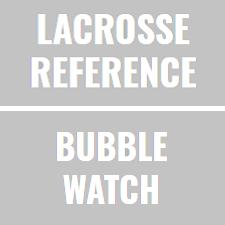 Welcome to the first installment of Bubble Watch. You are undoubtedly familiar with the concept from college basketball, so I won’t rehash the intent of this column.

But a Bubble Watch column in college lacrosse will be a bit different in substance from basketball, if not style. For starters, there are only 17 teams in the NCAA field vs 68 for college basketball. They have far more auto-bids vs the 8 (9 if you count the ACC) that we have in lacrosse. That leaves just 9 spots for teams that do not win their conference tournament.

The net result is that bubble discussion in lacrosse is centered on fewer, better teams..at least on Selection Sunday. And that is why I’m comfortable starting a Bubble Watch column in these early days of March. The games being played now, especially the inter-sectional games, are critical to determining which teams stack up come Selection Sunday. A lot of your resume, especially in terms of RPI, is written now. My intent with this column is to give fans a heads up of the critical games that are happening now and what impact they could have on each team’s tournament chances.

It is far too early to declare any team a lock at this point. Cornell currently has the best tournament probability at 94%. But if they lose their next game (in Charlotte against Penn State), their chances drop to 91%. Even with a win, they would jump to “just” 97%. If the Big Red take a few losses in Ivy League play (a distinct possibility), they could very easily end up in the bubble conversation once again.

But as we get through the season, some teams will end up in lock status. There will be some threshold of NCAA probability where I’ll feel comfortable saying that a team is in. Since all of these projections are driven by the season simulator, it’ll be possible to say something alone the lines of: “Team X is a lock when they make the tournament in 99.5% of the simulations run.” Or something to that extent. Regardless, it’ll be driven by the results of the simulations rather than my subjective view of how teams stack up.

Invitations in the mail…

While we may not be able to move many teams to lock status any time soon, there will be a good contingent that we can say are probably going to be in the tournament. Cornell certainly falls into that camp. I would probably put in a team that is heavily favored to win their conference but would likely not get in without an auto-bid. Think of it like this: if everything falls out in the most likely scenario, these are the teams that would be in.

A quick side bar… Last year, the “selection criteria” that I had the model use was RPI, plain and simple. While the selection committee says that RPI is just one of several factors that go into their decision, it was the decisive one last year. If you simply lined up all the bubble candidates by RPI in descending order, all the teams above 11 were in, and all the teams with an RPI ranking 12 or higher were out.

But that is not how it had to be. The committee could have let Cornell in over Hopkins. Cornell was 2-5 vs RPI top-10 teams where the Blue Jays were 2-7. Hopkins was a .500 team and Cornell’s record was much more impressive. Perhaps most importantly, Cornell had the 10th best Strength-of-Record (SOR) in 2019; Hopkins was 20th.

Obviously, the committee is not simply looking up the top RPI teams, drawing a line under the point at which they have enough AL qualifiers and then hitting the golf course. They’ve heavily favored RPI in the past, so it makes sense to give RPI the highest weighting. But, unlike last year, I probably will not weight it 100%. I think the SOR rankings are a useful secondary factor to try and incorporate some degree of resume quality, which RPI really downplays.

(If you are curious about RPI vs SOR, I wrote up a piece last year.)

RPI, SOR, and SOS refer to the current values, as opposed to projected values. SOS is calculated using the NCAA’s method. NCAA% includes auto-bids and at-larges.

Lots of Big Ten, ACC, and Ivy League teams here (and Loyola). Remember, this list is not based on who currently has the resume to be selected, it is based on the number of simulations in which each team was selected (the right-most column). And that number is based on both the upcoming schedule difficulty, and the number of wins and losses that each team is forecast to end up with.

As a result, the current rankings are a bit all over the place right now. The fact that all these teams are in one of the top-3 conferences goes to show the importance of team strength and conference strength. There are teams that are projected to have better records that some of these teams, but because of their strength-of-schedule, they are relegated to the lower reaches of this post.

Take Maryland as an example. The Terps are currently projected to have a record of roughly 10-5. Compare that with Bucknell, who the projections have pegged at 12-4. Yet the chances that Bucknell gets an AL bid when all is said and done is less than the 10% cut-off to be included in even the “Work-to-do” section.

As a general rule, the teams with the higher tournament probabilities will not show as much variation between wins and losses. As you get down toward the 50% NCAA probability mark, the games are more important.

The Cornell/Penn State game only represents 6.8 percentage points of tournament probability for the Big Red. For Ohio State, a team that is much more likely to be in the bubble conversation, the game this weekend against Hofstra is a much bigger deal, representing 24.9 percentage points of tournament probability. Now the Cornell/PSU game may have seeding implications, but that is not the immediate concern of the Bubble Watch column.

The next category of bubble teams is those that have a shot at a tournament bid but will need some things to break their way to snag it. This group will include those teams that are less than overwhelming favorites to win their one-bid leagues OR teams from major conferences who currently do not have the resume to get an at-large bid and are not favored to win their league.

In college basketball, no team is really out because they could always go on a tear and win their conference tournament. The same is true in college lacrosse, but with the added wrinkle that for the top-tier conferences, you don’t even have to win your league necessarily. Johns Hopkins last year is a great example: they were pretty much dead in the water before 2 resume-making wins over Maryland to close out the regular season and in the conference tournament. And just like that, even after losing in the Big Ten conference finals, they were selected.

On the flip side, in past years, lacrosse has used a .500 record criteria to limit the teams that are eligible for an at-large berth, but I’m not seeing that on the NCAA site anymore, so unclear whether that will still be a criteria. That is not a concern in college basketball because the length of the season ensures that any team in consideration for an AL berth would have to have a winning record overall.

RPI, SOR, and SOS refer to the current values, as opposed to projected values. SOS is calculated using the NCAA’s method. NCAA% includes auto-bids and at-larges.

This is where you don’t want to be. Each of these teams needs something to go their way in order to get a bid to the NCAA tournament. For Notre Dame and Penn, you could say that they control their own destiny. Both teams are in this group because they have extremely difficult schedules the rest of the way, and compared to their conference rivals, they are projected to fall outside the top-tier of conference teams. As a result, they look like they could easily end up on the wrong side of the bubble.

For 2 of the Big East teams, it’s a slightly different dilemma. Villanova and Providence have had hot starts, a few quality wins, and a strong SOS, but the Lax-ELO ratings aren’t convinced yet that they are truly top-echelon teams. Since Lax-ELO ratings are used to project winners in our simulation, these teams end up with a so-so record at the end of the day. Fortunately, they have a chance to prove that their early-season success is real. And if they do that, the Lax-ELO ratings will catch up.

Denver is a somewhat special case. The Pioneers are likely to end up with an OK schedule. The Pioneers are 15th in the Lax-ELO ratings, and projected to have a better record than Villanova for example. The worry for the Pios is that their early schedule included St. Bonaventure and Cleveland State. Villanova’s early slate, as a counter-example, really didn’t have any cupcakes. As a result, despite similar records and identical conference slates, the final Villanova RPI tends to be nearly 5 spots better than the final Denver RPI, which gives the Wildcats the advantage come Selection Sunday.

Again, all of these teams have challenges ahead, but at this point, they all have the opportunity to play there way into the tournament, especially given that they all have games against the teams that look more safely in at the moment.

We can also look, quantitatively at the games that produce the largest probability swings between the two teams. If you care about who’s in and who’s out, these are the games that we’ll look back on once Selection Sunday rolls around.

Not surprisingly, several of these games are between teams in our “work-to-do” bucket. But we also have Duke vs Loyola, which goes to show that even among the teams that should be in, we are expecting losses to occur. It’s early, so either the Blue Devils or the Greyhounds are going to get a loss this weekend, but even with that accounted for, the model still expects them to be a part of the field once May rolls around.

The Rest of the Pack

A basketball bubble watch that listed all the teams not in consideration would be a little silly given the number of teams not being considered. But this is lacrosse, we only have 75 teams, so what the heck. Here are the rest of the teams that don’t have a shot outside of their conference tournament, along with their relevant statistics.

One of the ways that I favor for ranking the conferences in college lacrosse is the number of tournament bids they receive. Because so few teams make the dance in lacrosse, this is a better proxy than in college basketball where 2 or 3 really good teams can make a better conference than a league with 1 good team and 4 teams in the 8-12 seed range.

Of course, number of bids becomes a much less fluid number as the season progresses and more teams are pushed into the lock category, so it’s also useful to look at the SOR ratings for a league’s teams as well as the longer-range Lax-ELO ratings.

I highlight them in this table because I am curious to see how they diverge over the course of the year. These factors are largely driven by schedule strength and since they are collectively 75% of the RPI total, they are important. Crucially, they are unaffected by whether a team wins or loses (these are the factors that gave Hopkins a tournament-worthy RPI despite a .500 record last year).

I will probably have more to say about this as the season progresses and the values start to crystallize once conference play begins.