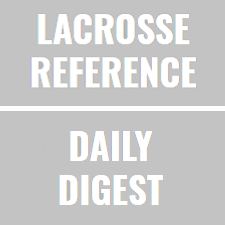 Sacred Heart
12
LaxWP Game Page
This is becoming a habit with the Seawolves. They’ve had their share of exciting finishes, and this one was no different. In fact, this was the 17th most entertaining game of the year, based on our game scores metric.

Overall, this was an extremely evenly-matched game. Stony Brook scored on 28.3% of their possessions vs 27.3% for SHU. Stony Brook had 46 possessions to 44 for Sacred Heart. They both won exactly half the face-offs. Fun stuff.

Tension Game Score: 71
★ ★
The tension game score for this game was 71, which indicates a game that was more swing-y than tight throughout.
Stony Brook Min. Win Probability: 2%
★ ★ ★
The lowest win probability that Stony Brook had at any point during the game was 2.4%, which means that this was a “happens-a-couple-times-a-year” type comeback.
Lax-ELO Points Transfer: 17
★
The victory means a transfer of 17 Lax-ELO points from Sacred Heart to Stony Brook. As a result of this transfer (and the rest of the games played), Stony Brook moves from 39th to 37th nationally; Sacred Heart goes from 40th to 45th.
Game Stars
Stony Brook
Tom Haun
3.54 EGA3.54
Mike Mccannell
3.03 EGA3.03
Renz Conlon
2.43 EGA2.43
Sacred Heart
Drew Edwards
5.86 EGA5.86
Logan Liljeberg
3.29 EGA3.29
Jake Giaquinto
2.94 EGA2.94
Game of Interest #2

UMBC
10
LaxWP Game Page
Towson has had a rough go of it this year, but it looked like they were on track to score a win against a tough Retrievers team that is considered one of the contenders in the America East. With 3:18 left in Q3, the Tigers had a win probability near 80% and a 2-goal lead at 5-3.

Over the remaining 18 minutes of the game, UMBC scored 7 goals while Towson didn’t manage to get a single shot on goal. The UMBC offense caught fire, scoring on 47% of their possessions while turning the ball over just 7% of the time. Hard to come to a conclusion other than that Towson ran out of gas. And the numbers back up that theory as UMBC has had the 7th shortest roster of any team in D1 this year.

As for UMBC, we now project that they have a 28% chance to win the AEC tournament and a 30% chance at an NCAA bid.

Tension Game Score: 78
★ ★
The tension game score for this game was 78, which indicates a game that was more swing-y than tight throughout.
UMBC Min. Win Probability: 21%
★ ★
The lowest win probability that UMBC had at any point during the game was 21.2%, which suggests that you would not fault those that switched over to something more compelling.
Lax-ELO Points Transfer: 16
★
The victory means a transfer of 16 Lax-ELO points from Towson to UMBC. As a result of this transfer (and the rest of the games played), Towson moves from 38th to 39th nationally; UMBC goes from 32nd to 28th.
Game Stars
UMBC
Trevor Patschorke
4.14 EGA4.14
Steven Zichelli
3.26 EGA3.26
Alex Poma
2.75 EGA2.75
Towson
Brody Mclean
1.9 EGA1.9
Tim Montgomery
1.11 EGA1.11
Grant Maloof
1.07 EGA1.07
Game of Interest #3

Mount St Marys
7
LaxWP Game Page
This game as pretty tight, with Mount St Marys even cracking 50% in win probability mid-way through the 3rd quarter. A 6-1 4th quarter by Richmond put paid to that.

The Spiders D really clamped down, especially in the 4th quarter. In that period, Mount only managed to get off 2 shots on 7 possessions while turning the ball over at a 57% rate. You won’t see many quarters where a team only gets .29 shots per possession.

Tension Game Score: 93
★
The tension game score for this game was 93, which means that it was not a very tight affair for the most part.
Richmond Min. Win Probability: 28%
★
The lowest win probability that Richmond had at any point during the game was 28.9%, which means that while things never get truly dire, this was an uphill battle.
Lax-ELO Points Transfer: 49
★ ★ ★
The victory means a transfer of 49 Lax-ELO points from Mount St Marys to Richmond. As a result of this transfer (and the rest of the games played), Richmond moves from 26th to 18th nationally; Mount St Marys goes from 50th to 58th.
Game Stars
Richmond
Ryan Lanchbury
4.59 EGA4.59
Richie Connell
4.07 EGA4.07
Dalton Young
3.08 EGA3.08
Mount St Marys
Sam Stephan
3.67 EGA3.67
Joe Bethke
1.78 EGA1.78
Luke Frankeny
1.69 EGA1.69
When we are blessed with a day in which the slate of games numbers in the dozens, it is all but impossible to really keep track of all the goings on in D1 lacrosse. So we decided to put out a daily digest of the day that was. The idea here is to use some metrics that we can calculate for each game as a way to highlight the most meaningful or interesting matchups.

To rank games, we will be using three values:

We will present the metrics for each game, along with a star-based indicator to tell you how common or uncommon that outcome is. For example, a game in which the winning team had a win probability in the single digits is a rare occurence and would get 3 stars in that category.

We welcome your feedback, and we hope that this helps you to distill down the craziness of a full lacrosse slate into a more digestible list of highlights.