Strength of Schedule 2019: A Sneak Peek

Note: if you are looking for current S.O.S. rankings, they are here.

Even though we still have a few holdouts who are refusing to officially release their schedules (cough cough, Notre Dame), we finally have enough announcements that it’s possible to piece together even those missing schedules. (If ND plans on playing NJIT this year, my whole plan is ruined).

And that means that we can get you all your eagerly awaited “Strength of Schedule” rankings for the coming season.  So without further ado, here is your top 10 toughest schedules: 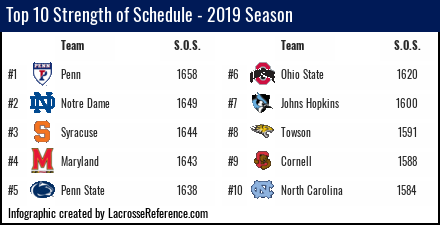 For context, a team’s schedule strength is calculated by taking the average Lax-ELO rating of their opponents.  For more on Lax-ELO, check out this explainer.

Remember last year?  Remember all those discussions about how Penn deserved a look at an at-large bid because of their schedule?

Well, if the Quakers have a halfway respectable record and don’t win the Ivy League title, expect to hear more of the same. 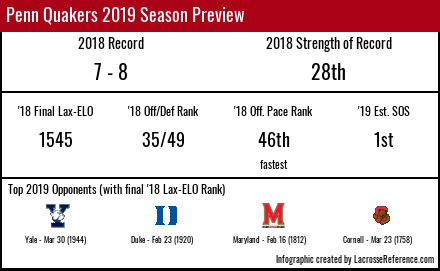 The Quakers benefit from several tough league games against Yale and Cornell.  But they’ll also go out of conference to take on Duke and Maryland.  Frankly, if they can improve on that 7-8 record, I think they deserve a serious look.

Seeing who is on our list of top-10 toughest schedules also makes you think about who is not on it.  An ACC team is going to have a top-20 schedule as a matter of course.  The guaranteed games because of conference play guarantee that.  Similar situation in the Big Ten.

But still, Duke (17th toughest schedule) and Virgina (13th) are well behind teams without such a built-in murderers’ row (Towson is 8th).  Michigan and Rutgers also come to mind.  And that is down to the choices that the programs have made about who to schedule out-of-conference.

There is absolutely nothing wrong with that of course.  Different programs have different philosophies about how to prepare their teams for the postseason.  But they should do so knowing that a mediocre schedule could be the difference between a first round home game or hitting the road.

They never said it would be easy

Towson is such an interesting case.  By geography, they are right in the heart of blue-blood country.  They had a run to the final four two years ago.  But last year was not what Coach Nadelen had envisioned for the follow up.

The Colonial is not a one-horse conference, so it’s not like Towson can sit back and waltz their way into the NCAAs by virtue of a tournament win.  And this schedule guarantees that they will face their fair share of adversity throughout 2019. 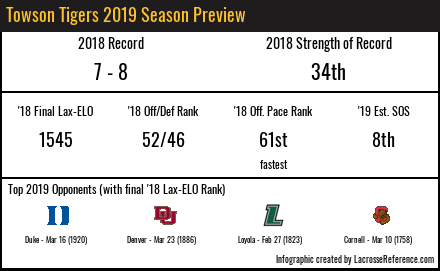 Uniquely for a team on our list, none of their top 4 toughest games are in-conference.  Duke, Denver, Loyola and Cornell all present really tough tests for the Tigers.

Let’s not sell UMass short as an obstacle in the Colonial, but clearly, Towson has realized that to have success in May, they need to go out and schedule their own adversity.

Meet me in April

Of course, these pre-season rankings are based on how teams ended last year.  They don’t account for injuries, graduations, coaching changes, or anything else that is going to affect these teams in 2019.

So the only thing we can say for sure is that the actual strength of schedule rankings when it matters are not going to look like this.  As the season progresses, we’ll revisit this list and see which teams have truly faced the more difficult slates.

And that is the exciting thing: real live games are coming…