Nothing like Championship Monday.  Unlike college basketball, lacrosse’s championship game doesn’t come after a workday.  No, like a kid with a birthday on a holiday, lacrosse fans get to wake up knowing that, yes, today is all about lacrosse.  We get to watch the two teams that have navigated the gauntlet of March to reach the final showdown.

As in college basketball, just reaching the final four is a big deal.  Coaches are measured on championship weekends achieved.  It’s called Championship Weekend for a reason.

Today’s game is the present to Saturday’s wrapping paper.  We waited all year for it, but now that it’s gone, we can focus on the real deal.

Good luck to both Duke and Yale.  In a twist of luck, Lax-ELO pegs these two teams as perfect equals, leaving this game a perfect toss-up (exceedingly rare). 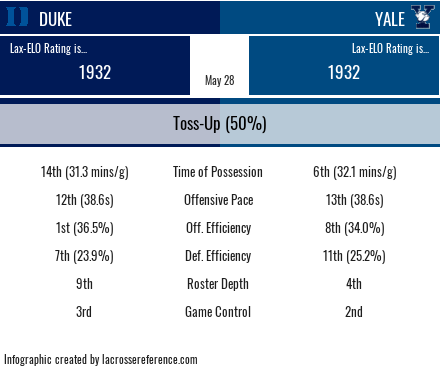 And unlike last year, the finals pits the top two teams in the rankings (last year, Albany was No 1. even after falling in the quarters).

To the teams and players, thank you for an amazing season.  To the fans, I hope you enjoy the present inside the wrapping paper.