It is getting very hard to envision a scenario where any conference other than the Big Ten can claim this season’s mantle for “Best Conference.”  Sure, Duke may end up winning the title.  All the Big Ten teams could flame out of the NCAA tournament.  But top-to-bottom, there is no way that any team is going to knock the Big Ten off it’s pedestal at this point.

Admittedly, I’m using “best” here somewhat narrowly.  The definition that this article’s headline is based on is the average Lax-ELO rating for each team in a conference.  You could make an argument that there are better ways to measure conference strength.  And I wouldn’t argue against that.  But simple is generally good, and you can’t get much simpler than averaging the strengths of a conference’s teams.

And when we use that method, it’s pretty clear that no one is going to top the Big Ten this season.

Ahead of the pack

One benefit of using Lax-ELO to compare conferences is the transactional nature of the system.  When one team beats another team, ELO points are transferred from the loser to the winner.  So if Notre Dame loses to Duke by 30, it has zero effect on the ACC’s aggregate Lax-ELO rating.  Conversely, when Rutgers beat Lehigh, 17 ELO points went from the Patriot League to the Big Ten.  It’s transparent and because the mechanics are zero-sum, it’s very clear why a conference gained or slipped.

I’ve taken the top 6 conferences and plotted their averaged Lax-ELO ratings from Feb 1 to the present.  Right now, the Big Ten’s average Lax-ELO rating is 1681.  The ACC’s is 1635. 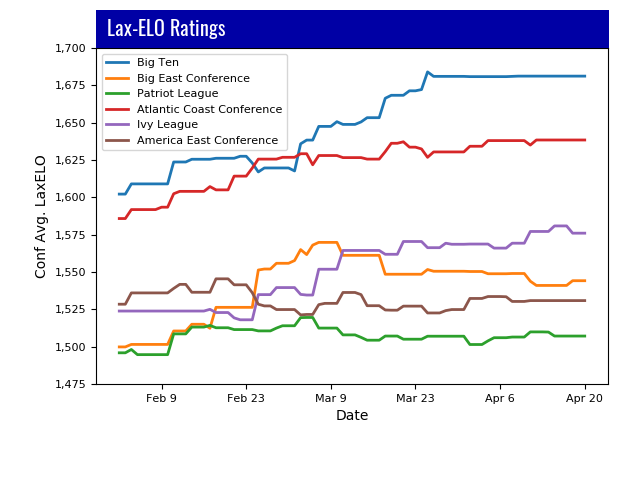 Among the other 4 conferences highlighted, the Ivy and Big East have had roughly the same increase on the year, although the Ivy was starting from a higher base.  America East and the Patriot League have held steady for the most part.  The clear story though, is that it’s the Big Ten and the ACC and everyone else.

The reason that I say that the Big Ten isn’t going to be caught is simple math.  There just aren’t enough intersectional games left in the season for the ACC to catch up, no matter what happens the rest of the way.

Consider this: the ACC actually overtook the Big Ten, in terms of average Lax-ELO, for about a week at the end of February.  But then, from early March through March 24, the Big Ten went on a tear.  It’s not an exact match, but there were probably as many total games in that period as there will be the rest of the season.  In that stretch, the Big Ten gained a total of 315 Lax-ELO points (or about 53 per team).

If you were following above, the current gap between the ACC is 1681 – 1635 = 46 Lax-ELO points per team.  So you might be saying, sure, they could still do it.  If the Big Ten can gain 53 per team over a similar stretch, why can’t it happen again?

Short answer: no, they can’t because there aren’t as many opportunities.  In that March stretch, the Big Ten went 18-6 in games against other conferences.  They had 24 opportunities to steal ELO points from other leagues.  At most, the Big Ten can lose only 6 more games to other conferences the rest of the way.  And that would assume every team makes the NCAA tournament, which they won’t.  Assuming a generous 4 bids for the Big Ten, they can only lose 4 games to other leagues.  There is no way the ACC is making up the gap.

And even if there were 24 more chances for the ACC to make up the gap, history suggests that they won’t.

Let’s dig into that March stretch for the Big Ten.  As I mentioned, they gained 315 total ELO points, while going 18-6 against other conferences.  Which conferences you ask?

The Big Ten ate the ACC’s lunch over that stretch, winning 5 games, losing none, and stealing 105 of the ACC’s ELO points.  Those games included:

You might retort: but Duke and Virginia weren’t included in any of those games.  And you’d be right, but remember, the amount of ELO that gets transferred is based on the outcome AND the expected outcome.  Maryland beating North Carolina only accounted for 5 of the 105 ELO points transferred; that game wasn’t a surprise.  Hopkins smoking Syracuse accounted for 65.  That game was.

So yes, the ACC didn’t have their best teams going in these matchups, but the gaudy ELO totals reflect the degree to which the outcomes were surprising, not just the outcome itself.  The ACC had a chance to solidify its hold on the belt, and it fell pretty flat.

I mentioned at the top that there are other ways to measure conference strength.  Another simple, but compelling, argument is to look at the top team.  Who cares whether a conference gets multiple bids to the tournament; all we care about is who wins the thing, right?  If that is your approach, then the argument for the ACC is still alive and kicking. 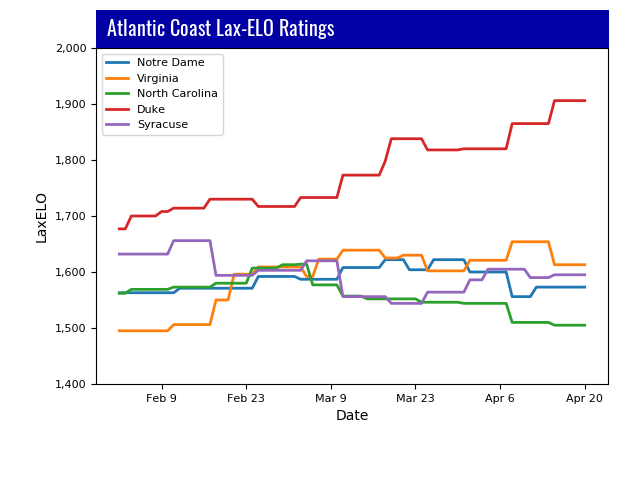 Clearly, the Blue Devils are the cream of the crop in the ACC.  The 5 teams were much more bunched at the beginning of the season, but since then, everyone has more or less stayed in place while Duke has separated themselves. 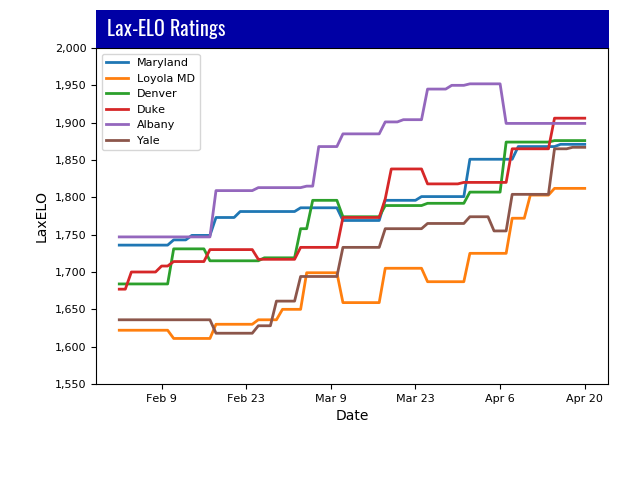 Now all that is to say that the question of “best” is a tough one to answer in terms of conferences.  If I had to pick between the average ELO and top ELO, I’d go with average ELO, obviously.  But I wanted to point out the “other hand.”

Not much really.  At the end of the day, the “best conference” argument is bragging-rights at best, trivia at worst.  If Duke does end up winning the title, will anyone care that the Big Ten had a great March run, or that their average ELO is the highest: no.

Another thing that is interesting from looking at this is that our ELO ratings clearly have not stabilized in 6 years.  Since the first games in our database are from 2013, this season is the 6th season where we’ve been measuring Lax-ELO for each team.  Since every team started the ’13 season with an average 1500 rating, we would expect that it would take a while for the ratings to stabilize.

At a certain point, the top half of D1 isn’t going to continue seeing higher and higher ELO ratings every year.  There will eventually be an equilibrium where the ELO ratings accurately reflect the quality differences between teams.  Since we are still so close to the 1500 start-gun, the model is apparently still underestimating favorites.  I’ll be curious to see if that changes next season.

Here are the Lax-ELO charts for every conference. 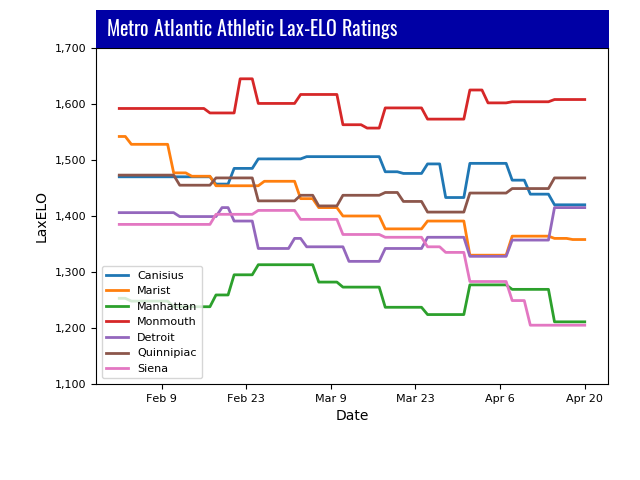 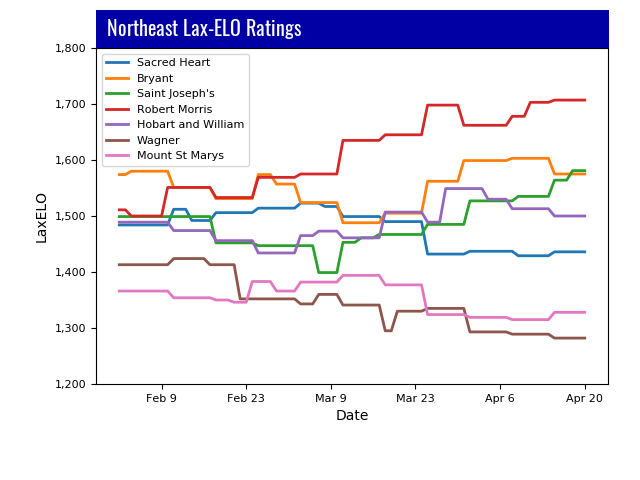 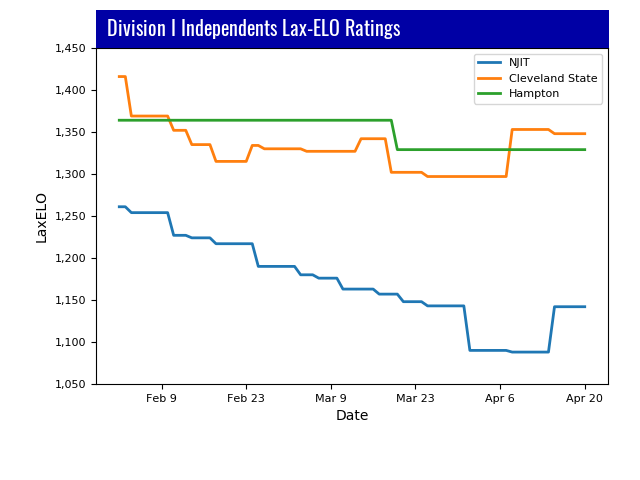 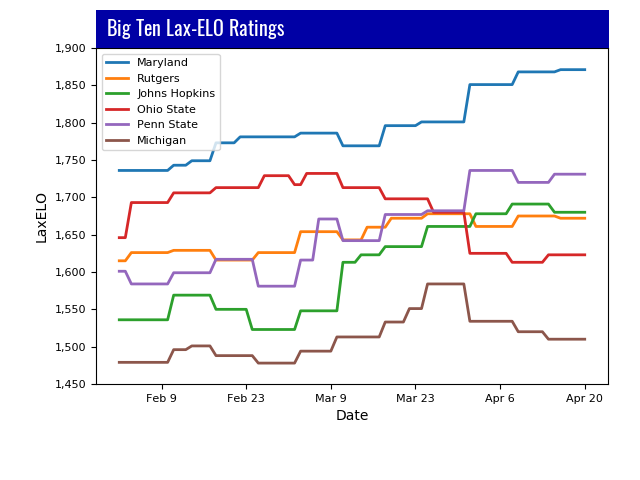 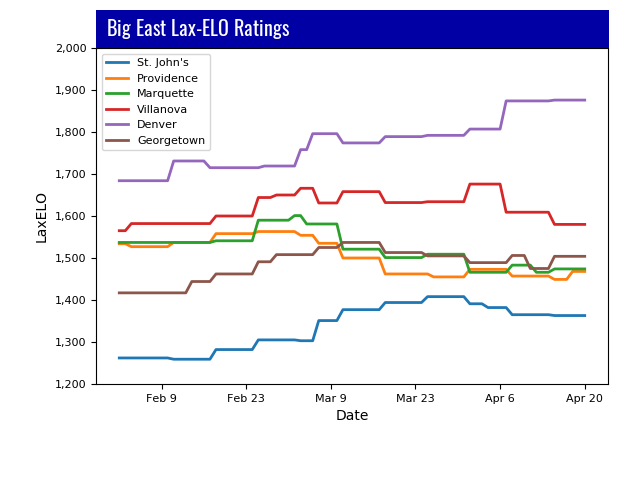 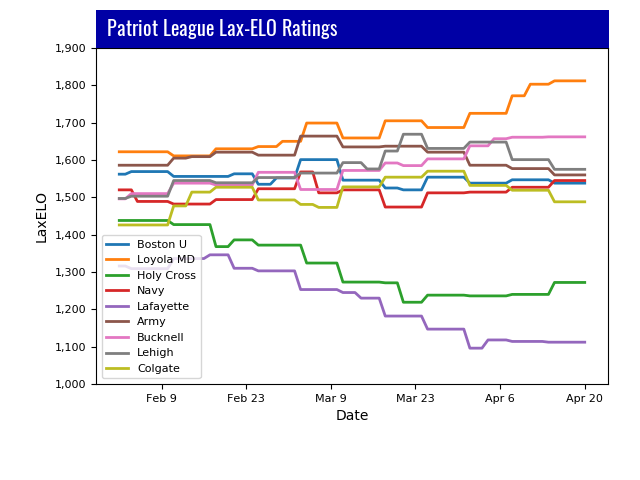 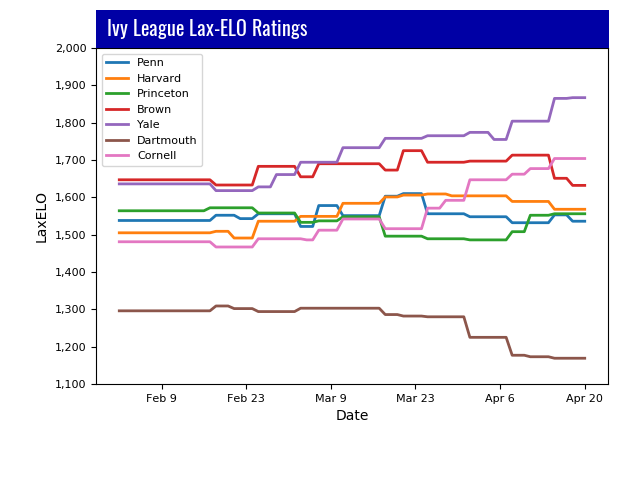 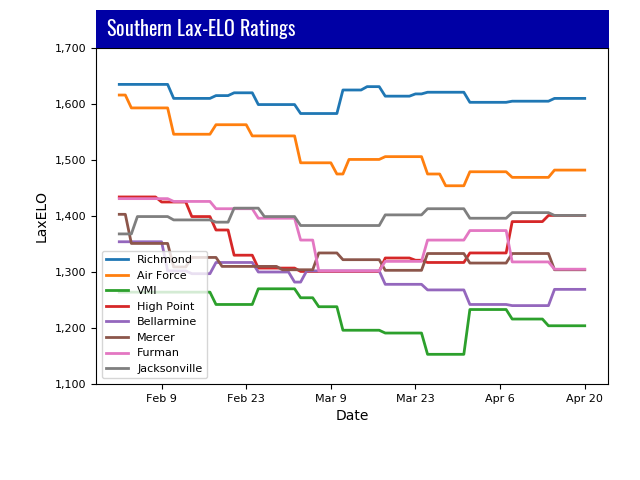 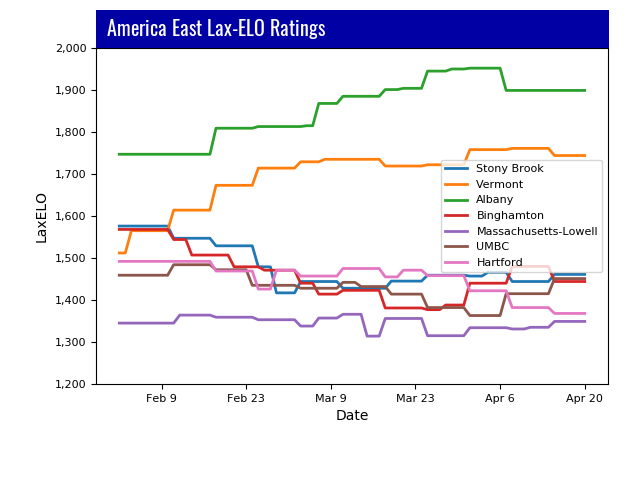 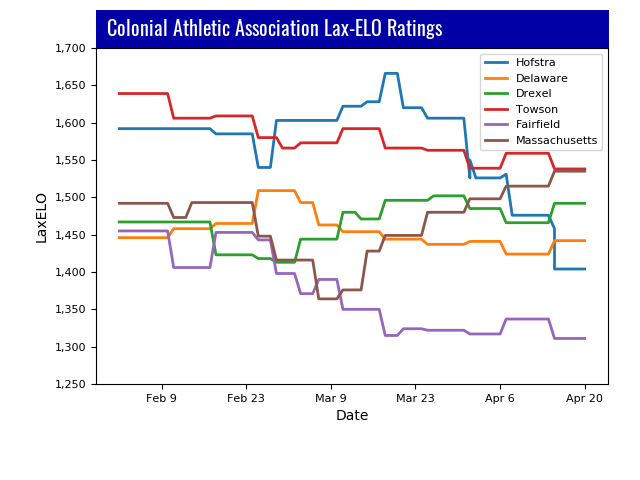