Assists are a tricky thing.  Different sports handle them differently (see hockey assist).  In some cases, the goal wouldn’t have happened without the pinpoint assist.  In some cases, the player credited with an assist just happened to pass the ball to teammate who then made an amazing play to score a goal.

No sport values assists as much as scoring, but basketball is probably the closest because they have a defined position (point guard) who’s job (in theory) is to accumulate assists.  Lacrosse certainly has players who are viewed in the same way a point guard might be in basketball, but I would argue that it’s not to the same degree.

That said, like hockey, the concept of total points is important in lacrosse.  A 7 goal, 2 assist game is likely to be described as a 9-point effort.  Like I said, assists are tricky.

But regardless if the “importance” of the assist, the impact of a player that can set the table for a teammate is enormous.  Having a player capable of racking up assists typically means that the rest of the offense will have easier chances, all else equal.  If a team doesn’t have that player who can break down defenses, then the offense is going to rely more heavily on individual efforts.

Depending on the make-up of the roster, that may be ok.  But by and large, a defense would rather face a bunch of hero-ball offensive possessions than face the death-by-a-thousand-cuts that a surgical playmaker can cause.  Defensive coordinators of the world, feel free to contradict me.  After all, up to this point, you are just reading the non-empirical musings of someone who is not a lacrosse coach.

That is not to say that you can’t apply some empirical hypotheses to this topic.  In fact, that is exactly what I have done.  To really understand the value of a table-setting assist machine, I wanted to try and answer 4 questions:

How do assists drive offensive efficiency?

This is the type of question that you could answer a lot of different ways.  Do you look at the percentage of goals that come off an assist?  Do you look at how many different players have registered assists?  What about the number of goal scorers?

My assumption going in is that the more goals that are assisted, the more efficient an offense is going to be.  This goes back to the idea that a defense would probably prefer to face a hero-ball offense rather than one that makes the extra pass to set up an easier chance.  All else equal, more assists = better offense.

Looking across the 300+ games of the 2018 season, this does not appear to be the case.  I plotted every team in D1, percentage of goals that are assisted vs the efficiency of the offense.  I was very surprised to see that the relationship was negative (even if moderately).  Ignore the correlation coefficient for a second; the point is that there is no meaningful positive relationship.  Theory 1: disproved. 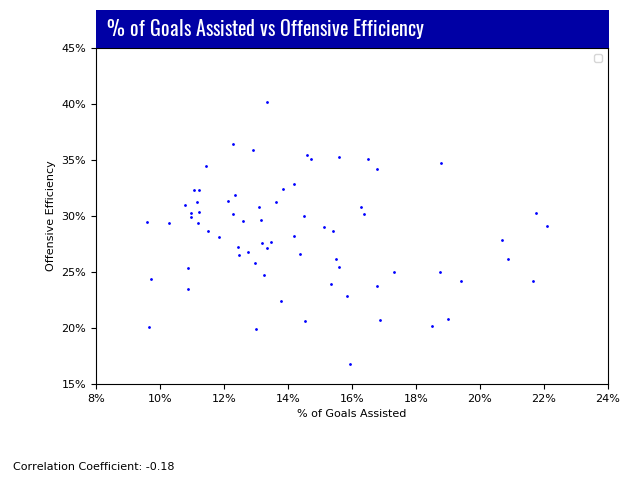 My explanation: it’s not that assists are bad, it’s that teams that don’t have transcendent goal scorers are forced to rely more on team offense.  That sounds odd, but it makes some sense.  If you have a player that can score on their own, you aren’t dependent on a pass-heavy offense.  We tend to think of pass-heavy offenses as finding the weak spot in the defense, but it is also true that every pass is a chance at a turnover.  Perhaps surgical offense is just a fallback strategy in the absence of a bonafide goal scorer.

I ran several more correlations to see what sort of assist metrics are most correlated with team efficiency.  None of the relationships were especially strong, but the strongest predictor of offensive efficiency was the presence of a single point man for the offense.  If a team had one player who accounted for a large percentage of the team’s assists, according to this data, we would expect their offense to be more efficient.  Say what you will about a .34 coeff, but in trying to predict something like offensive efficiency, that’s pretty strong. 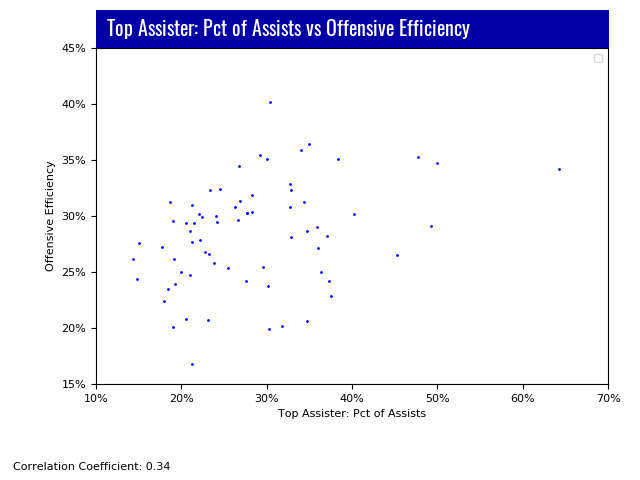 Again, it’s not like this single metric is a perfect predictor, but it’s the strongest that I could find.  I ran the same analysis, but substituted goals for assists.  In other words, I looked at the percentage of a team’s goals that the top scorer scored.  There was basically no correlation with team efficiency.

This goes against the “bonafide scorer” theory that I put out there above.  If you could have a single amazing goal scorer or a single amazing table-setter, you’d rather have the latter.  So I’ll update that “bonafide scorer” theory: the best offenses are those that have one player who can get the defense out of whack whenever they want.  If you have one player who accounts for a large percentage of goals, the defense can just focus on them and force other players to step up.  It turns out that it’s much harder to shut down a player who is capable of setting up teammates.

So which teams have that transcendent table-setter?

I went through each team and calculated the percentage of the team’s assists that came from their top assister.  Some household names, some not.

Will Sands is doing some work for Bucknell (Note: this does not include their win over Yale).  The Bison are 39th in Division 1 with 5.6 assists per game.  But Sands has 36 of their assists, accounting for 64% of the total.  That is nuts.  And, Bucknell is 10th in the nation in offensive efficiency, which anecdotal though it may be, backs up the theory that it’s not total assists, but how good your table-setter is.  Assisted goals are not better than unassisted goals.

These may not be the best players around, and they are certainly not the most visible, but if you had to pick one guy that drives his offense, you would probably want to start with this list.

We’ve focused a lot on the assisters, but an assist can’t get recognized if the ball doesn’t go in the net.  There needs to be a goal scorer on the receiving end of that pass.  And as we mentioned above, not all assists are created equal.  In some cases, these goal scorers did most of the work.  In some cases, the passing did the work and they were just putting the goal away.

But in any case, I thought it was interesting to take a look at the players that benefited the most from a single table-setter.  (I threw out the question of who might be on the list and Lacrosse Twitter nailed several of them.  LaxFilmRoom also pointed out our top pair on Twitter during the game last night.)

Fully 60% of the goals that Connor O’Hara has put away this year came off a Will Sands assist.  That is kind of an incredible number.  And it does present some sort of opportunity for a defense going up against Bucknell.  I am quite sure that defensive coaches who watch film know in about two seconds whether an offense is driven by goal scorers or whether it flows through a table-setter.  But for the fans who don’t, this gives you a quick primer on the guys to really watch.  Don’t get fooled by goal totals people!

I don’t watch as much lacrosse as I wish I could, so others may disagree, but I did think it was interesting that the big names seemed to show up more in the assister column than in the goal scorer column.  Two possibilities there.  First, it could be that the guys who get top billing are able to make their own shot, and as a result, are less likely to have a single teammate assisting on many of their goals.

Second (and I’m optimistic that this is the true reason), it may be that the lacrosse pundit universe is sophisticated enough to recognize the importance of these players to the flow of their offense.  As opposed to being suckered in by gaudy goal totals alone.

Now on to the trivia section of today’s event

The first shows the teams that have had a higher ratio of assisters to goal scorers.

The second shows the teams that have had more goal scorers than assisters.

I’m not quite sure what to make of these lists.  But it does seem that from everything we’ve seen so far, you’d rather be on the second list.  Of course, it’s rarely ever that cut and dry.  Maryland and Towson both have the same profile, but Maryland boasts the 6th best offense and Towson, the 57th.

Tactically, this suggests that when you are designing an offense, it’s not all that important how the play ends.  You don’t need to run a play to get player X a good shot.

What matters is that you get table-setter Y in a situation where they can work their magic and create a good shot for whoever happens to be there.  Does this mean that backyard lacrosse is more effective than rigidly designed plays.  Probably.  A play design just needs to get things moving; if you can help your table-setters force the defense into a first mistake, everything flows from there.

I’m not sure if there are any coaching staffs that design plays all the way through to the shot attempt, but if there are, they should stop.  Just get your table-setters into position and let them make things happen.

Every team with number of goal scorers and number of assisters.

Here are the other plots that I generated. 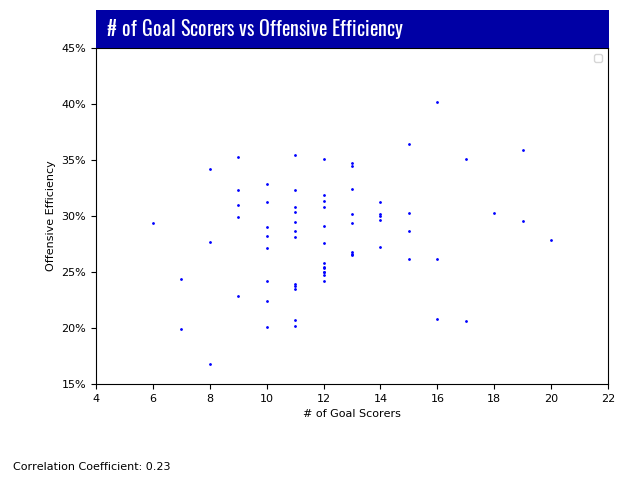 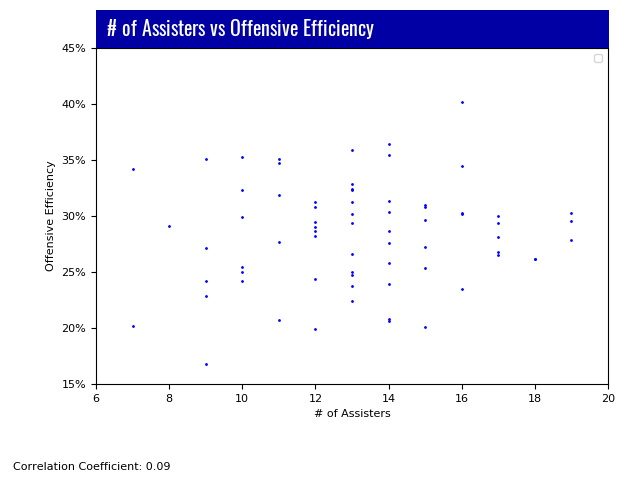 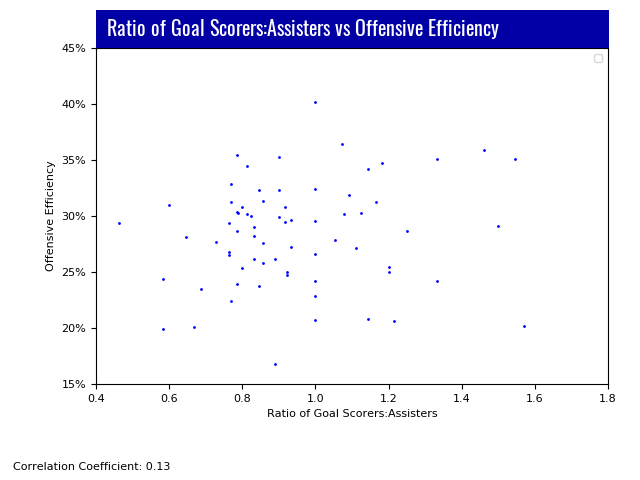 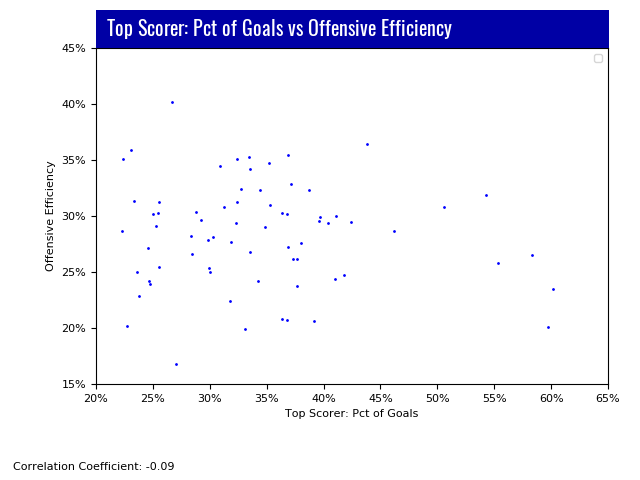 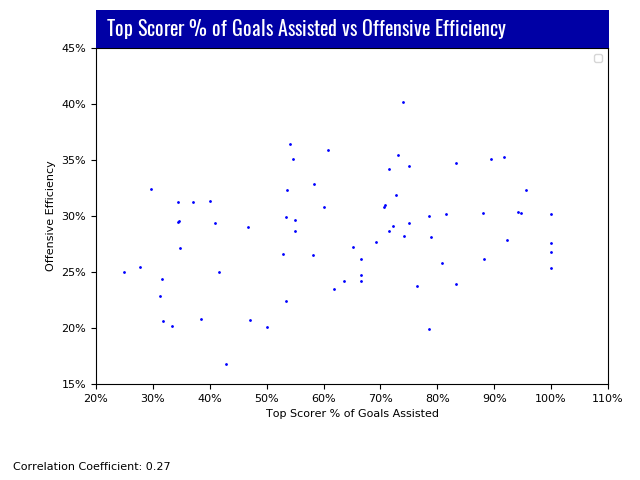