Adventures to the Efficient Frontier

They say that imitation is the sincerest form of flattery.  I hope that the folks over at FiveThirtyEight buy into that idea.  Because this post is a shameful rip-off of a concept they wrote about recently.  But hey, if it hasn’t been done for college lacrosse yet, that always perks up our ears.

The article, by Neil Paine and Andrea Jones-Rooy, was titled, “James Harden’s 60-Point Triple-Double Pushed the Boxscore To Its Limit” and it focused on a concept that I certainly had not seen in sports coverage before: Pareto Optimality.

In a nutshell, the concept is that when you are trying to build the best version of something, you often have to trade-off between two (or more) desirable attributes.  The FiveThirtyEight folks use the example of building a car: at a certain point, increasing the size of the car will inevitably make it slower.  In investing, this concept often comes up in discussions of risk/return; at a certain point, increasing returns has to mean taking on more risk.  You’ve hit the limit when you can’t get more of both good things.

Get back to sports analytics

In the article, they described James Harden’s performance against the Magic as a “Pareto Game.”  They write: “A player has a Pareto game if no other player has ever posted better numbers in all three stats in a single game.”  We can apply the same logic to a lacrosse box score, replacing points with goals and rebounds with ground balls.

I do have a small methodological adjustment in my model.  In the FiveThirtyEight analysis, they count any game that is not bested in all 3 categories.  This means you could be tied in points, but bested in assists/rebounds and still make the list.  I’m not sure why a game that was clearly bested by a subsequent performance would be included.  This analysis excludes those games.  (If the FiveThirtyEight folks want to share their reasoning, I’d love to update this post.)

Removing the tie games reduces the number of efficient frontier games from 122 down to 22.  Interestingly enough, the FiveThirtyEight analysis found 125 “Pareto games”.  Which begs a future question about whether there is a functional upper bound on the number of possible Pareto games using a troika of stats like these.  For another day…

(Unfortunately, since I’m relying on the NCAA’s play by play data, I only have box score data going back to 2013.  Sorry all-players-who-had-great-games-prior-to-2013.)

So what do we find? Using our definition, we found the aforementioned 22 efficient frontier games since 2013.  The full list is:

Needless to say, there are some big names on this list.  Thompson brothers, Tewaaraton finalists, future pro stars; this list has something for everyone.

One interesting thing is that the number of efficient frontier games per year seems to be increasing.

There isn’t any particular reason that older games should be any more likely to be bumped off the list, so it’s not a question of older games getting replaced as a matter of course.  Then again, it’s 5 years, could just be noise.  But if there is one thing that could be driving the increase, it could be the addition of the shot clock halfway through this data set.  More possessions and whatnot.

We should have colored the table purple and gold

Obviously, every player on that list had at last one day to remember.  Every team should be proud to to have a player on this list.  But if we are handing out a team award related to this stuff, it has to go to Albany. 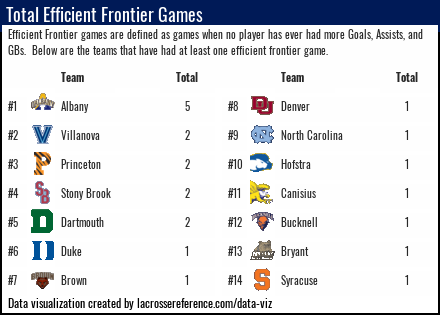 The Great Danes have three different players who have registered EF-games (Lyle Thompson, Miles Thompson, and Connor Fields).  Collectively, Albany players have registered 5 EF-games since 2013.  Several teams have 2 such games (including double-dips from Villanova’s Jake Froccaro and Princeton’s Zach Currier).  But by and large, teams are lucky to have any EF-games at all.

We’ve written about some of Albany’s unique performance oddities before.  Chalk up another one.  We last wrote about Albany’s record of turning unheralded recruits into a lot of on-field success.  That would be considered more of a program feature in my book.

But this is a different animal entirely.  Maybe a cop out, but I can’t really come up with a theory more plausible than 3 transcendent talents happening to end up there.  Players like these guys are going to be the ones most likely to generate EF-games.

One thing that I really like about the Pareto-game/Efficient-Frontier concept is that it can change at any moment.  Tomorrow, someone could go score 11 goals, with 11 assists, and 20 ground balls.  If that were to happen, we’d suddenly have a list of 1 games that qualify.  Of course, that is very unlikely to happen (it would kind of be a bummer if it did).

What is more likely is that we’ll gradually add and lose games from this list over time.  The efficient frontier steadily creeping outward as record performances are put up.  Over time, it will become harder and harder to join this list.  But since we only have data going back a few years, I suspect that won’t happen any time soon.

Of course, that could all change with rule changes.  If it were to become more easy to score for example, then these records would all immediately be in jeopardy.  The shot clock comes to mind here because it inflates the number of possessions in a game, which increases the number of opportunities for all three of these counting stats.  Fortunately, most of our data set comes after the shot-clock era, so I wouldn’t expect it to affect a huge number of these games.

Another possibility, down the road is a potential impact due to roster construction.  Let’s say, hypothetically, that the NCAA allowed larger rosters.  Overall, that would mean less minutes per player, which means less chances to accumulate counting stats.  That would make the games on our list more secure.  Conversely, let’s say that there is a trend toward playing top players more (unlikely, but who knows).  That would have the opposite effect.

But by and large, I don’t expect rule changes to have a huge effect on the overall composition of this list.  But it will be fun to collectively celebrate games that are added and mourn the loss of games that are kicked off the list.  I’ll find some way to share updates as that happens (probably via laxrefbot at a minimum).