Albany has developed overlooked talent better than anyone

As we went through our geographically focused talent analyses over the past few weeks, I was always harping on the fact that there isn’t good data on recruits before they reach campus.  Well that’s not entirely true.  Inside Lacrosse has, for years, published a top 100 for incoming freshmen.  It’s not comprehensive because it doesn’t cover all incoming freshmen, which means that it would be difficult to use it across all teams.  But that doesn’t mean it’s useless for lacrosse recruiting analytics.

So that’s what we’ve done; a quick and dirty summary of the past 4 years of recruiting data.  My goal with this post is not for it to be a concrete ranking of teams and their abilities to recruit and or develop talent.  For one, I have no way to consider injuries, and I have not added the necessary complexity to handle coaching changes or transfers.  Instead, I wanted to compile and share the data in a way that you may not have seen before.

Unsurprisingly, the blue blood programs lead the way in hooking top-100 prospects.  The table below shows the raw number of players from the IL top-100 lists who’ve picked each school.

As I mentioned, it’s not much of a surprise.  These are the blue blood programs of the men’s lacrosse world.  We have a few upstarts in Penn State and I suppose Denver if you want to get cute.  But by and large, the guys on the top-100 lists, the ones that have their choice of where to play, are going to the traditionally strong programs.

Can you blame them?  You are going to get the best competition, you are pretty likely to get to play in the NCAA tournament, and you’ve got a better than average shot at making it to Memorial Day weekend.

There is a little variation if you flip the metric and look at the weighted ranking of the recruits.  This table shows the total number of Inside Lacrosse recruit points that the top 15 teams have amassed over the last 5 years.  (For an explanation of the recruit point system, check out this IL article.)

This does allow you to see a bit of distinction in recruiting style.  A team like Notre Dame has been broad, meaning that they’ve snapped up a lot of top-100 players (34 to be exact), but they’ve averaged less than 2 recruit points per player.  On the IL scale, their 1.9 average points is roughly equivalent to the 27th recruit in the country.

Duke on the other hand, has nabbed 28 top-100 players, with a total IL recruit point total of 70).  That 2.5 points / recruit number is roughly equivalent to something like the 18th recruit on the country.  Are they better off than Notre Dame, who has more guys from the list, but at generally lower positions?  Obviously, the answer to that is that it depends on how they filled out the rest of their roster.

Doesn’t really matter anyway, my point here was just to show that within the top-100 list, there are degrees of talent and those degrees aren’t necessarily spread evenly among the teams.

(The full lists, for all teams that have appeared on the list, is at the end of the post).

Of course, the reason that teams recruit in the first place is to win games. Hopefully enough games that they are able to win more recruits. A virtuous cycle that programs try to maintain as much as possible.  So we’d be remiss to stop at the pre-campus numbers.  How did these recruits do in turning potential into results?

The graph below shows each team that received more than 2 Inside Lacrosse recruit points between 2013 and 2016 (the recruit years that made up last year’s rosters).  I would have included all teams that had any points, but the left side of the graph would be illegible (that chart and several others are in the appendix).  The x-axis is the number of IL points they received; you can interpret that as something like the total talent they’ve brought in.  The y-axis is the average Lax-ELO rating from last season (i.e. the average ELO after every game as opposed to a beginning or final ELO rating).  The context axes in the middle of the chart represent the average value for each metric (among included teams). 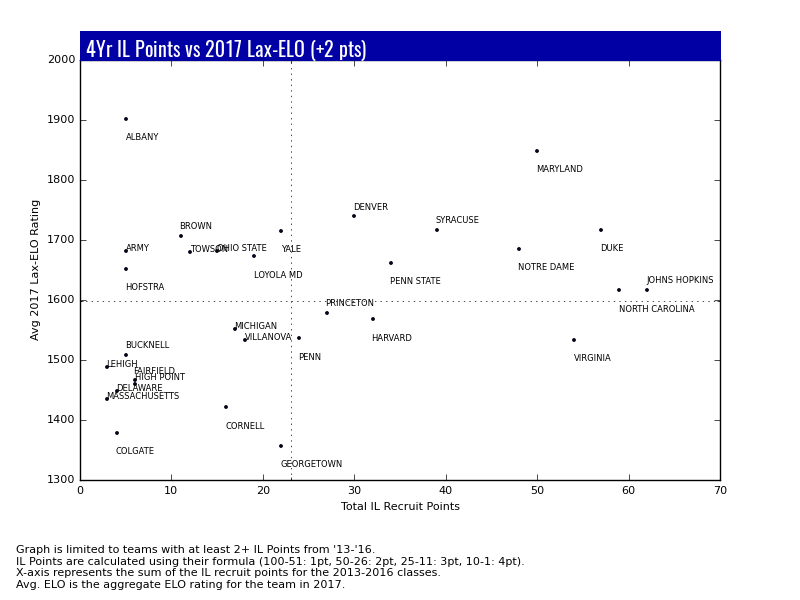 Ok, there are some things to unwrap here.  Before I get a bunch of nasty emails, let me reiterate:

With that out of the way, there are a few interesting things to take away from these data points.  First of all, Albany; wow.  There are several schools that have done a lot with a little, but the Great Danes stand out.  Their 2017 roster included just 6 players included in the top-100 lists from Inside Lacrosse. 21 teams had more.  Yet the Great Danes will enter the 2018 season with the top Lax-ELO rating.  That degree of player development is unmatched.

Army, Hofstra, Brown, Towson, Ohio State, Loyola MD and Yale make up the rest of that top left-quadrant.  It shouldn’t surprise anyone that a lot of the hottest candidates for coaching vacancies this offseason led some of those programs.

(Note: I’m very excited for a few more years to go by so that we can see what sort of patterns show up with respect to movement between the quadrants.  You could imagine a circle-of-life pattern emerging as teams go through the stages of program development and decline.)

On the other end of the spectrum, at the risk of sounding too dour, we’ve got the programs that have had highly ranked classes but who had fairly nondescript seasons last year.  Virginia comes to mind obviously, but Penn, Harvard and Princeton fall into that quadrant as well, in some cases, just barely.  At first, the fact that three of the teams in this quadrant are Ivy League teams gave me pause, but then Yale and Brown are in the top left, so it doesn’t seem like a systemic thing.

And then there a bunch of other teams that do about as well as you’d expect given their varying levels of recruiting success.

You might be saying: “ok, but last year’s freshmen haven’t had time to make an impact yet, so maybe this is skewed against teams that have more recently found recruiting paydirt.”  And to that I’d say: “fair.”

The chart below goes to the other end of the spectrum, showing only the recruiting points from last year’s senior class.  If you believe that seniors drive the team’s success, then this chart is for you. 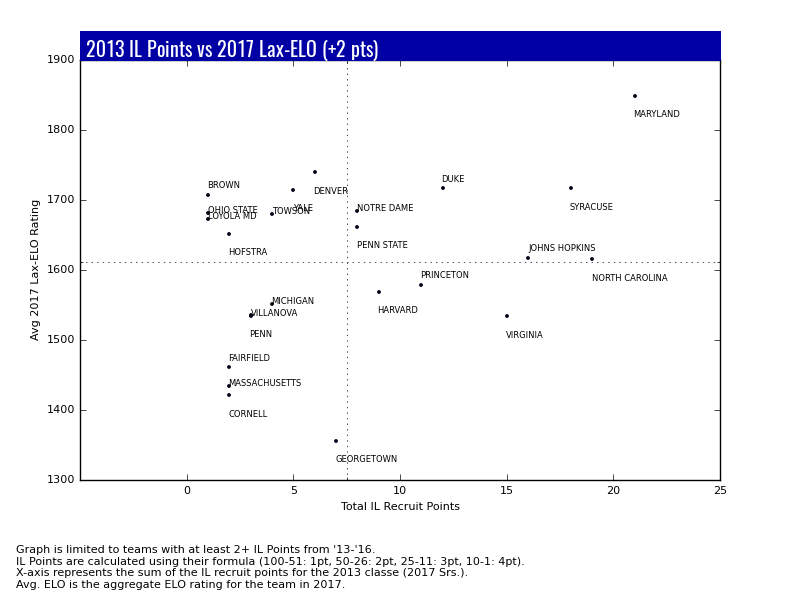 I used the same cutoffs and y-axis values as the chart above, so the movement of any team is down to the difference between the recruiting profile of last year’s seniors vs last year’s roster as a whole.

First of all, Albany doesn’t even show up on this list; they didn’t have a single player on the 2013 top-100 list.  Another data point that makes the rise of that program so impressive.

I do think it’s interesting that the distribution is a bit tighter than the previous chart.  This does lend credence to the theory that the effect of recruiting takes a while to filter through a program.  By this telling, if you wanted to predict ELO, you’d be better off using the recruiting profile of the senior class than the whole roster.  You’d still probably be bad at predicting, but still.

In terms of inter-quadrant movers, Denver shows up in our top-left quadrant in this chart, which tells me that their run to a title a few years back was even more impressive given the profile of the players they would have had then.

In potentially great news for Virginia fans, when we use their 2013 data only, they are in the middle of the lower-right quadrant.  In our previous chart they were quite a bit farther to the right.  This tells me that the recruiting profile of their younger players has eclipsed that of last year’s seniors.  If we’ve convinced you that the seniors drive the program, then brighter days are ahead for the Cavs.

The opposite could be said for Syracuse fans.

As I mentioned above, this is just meant to be a basic visualization of the data.  There is no model here, there are no assumptions.  It’s just the data.  Hopefully seeing it presented this way raises some additional questions.

Personally, I think an interesting next step would be to see how the recruiting data looks when you break it down by position and compare it against more granular on-field outcomes.  Do teams that have put a lot of effort into recruiting poles see a defensive return?  When does it come?  What does the distribution of positions by team say about a coaching staff’s priorities?  Are they consistent or do they vary depending on how the last season went?

Interesting questions all.  If you’ve got any other thoughts, let me know.

This shows all teams that have picked up at least 1 top-100 guy.  The values represent the number of top-100 players.

This shows all teams that have picked up at least 1 top-100 guy.  The values represent the number of Inside Lacrosse recruit points. 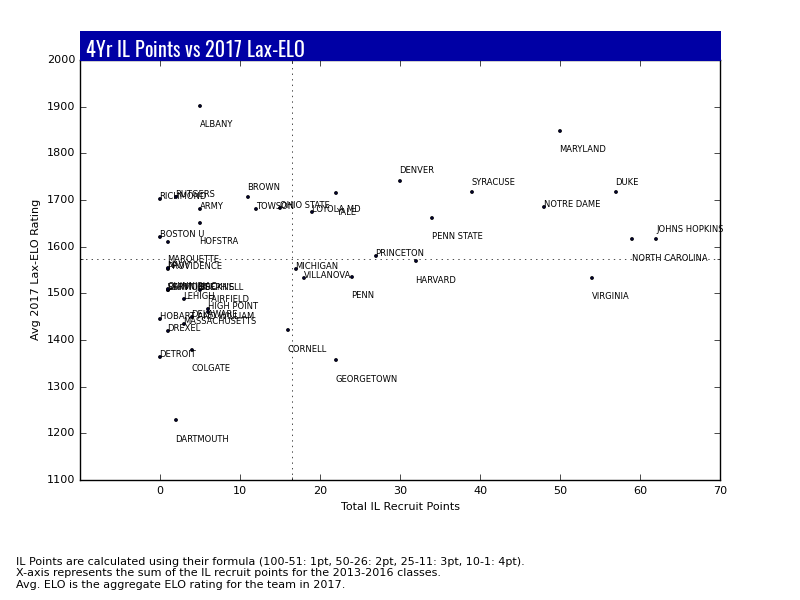 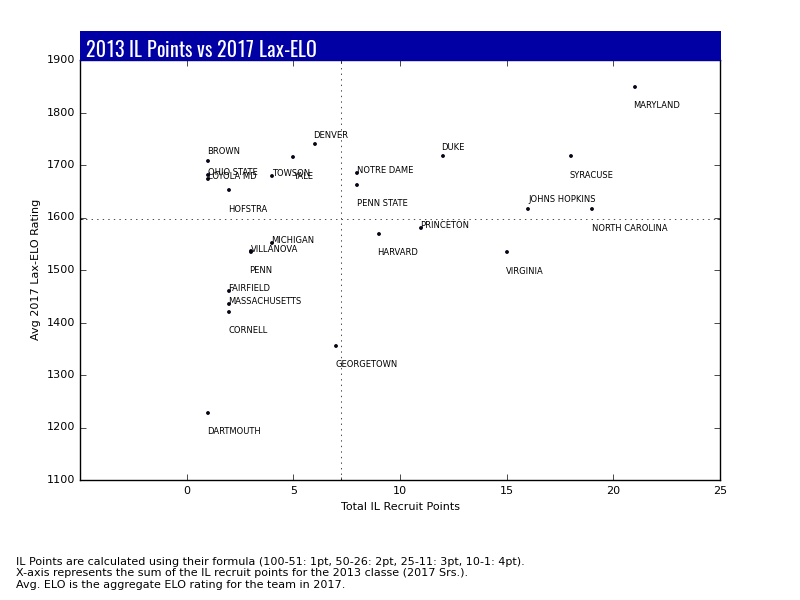 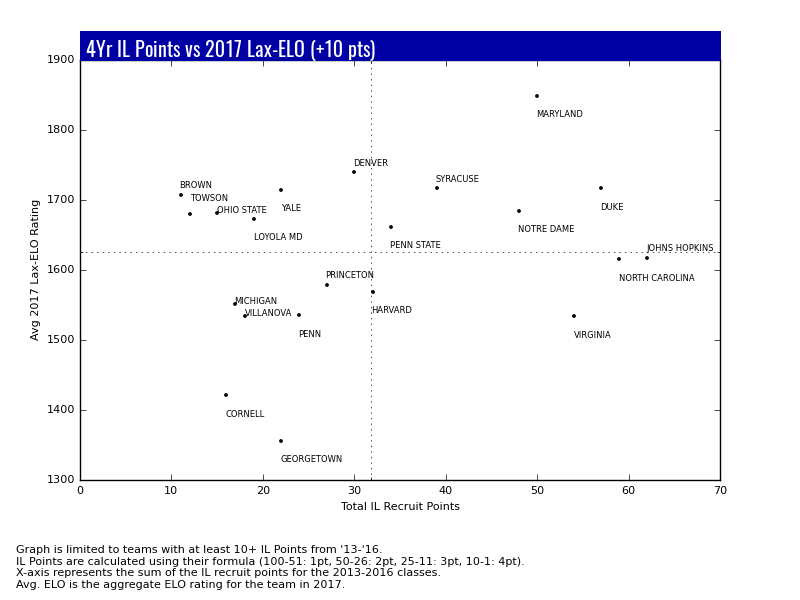 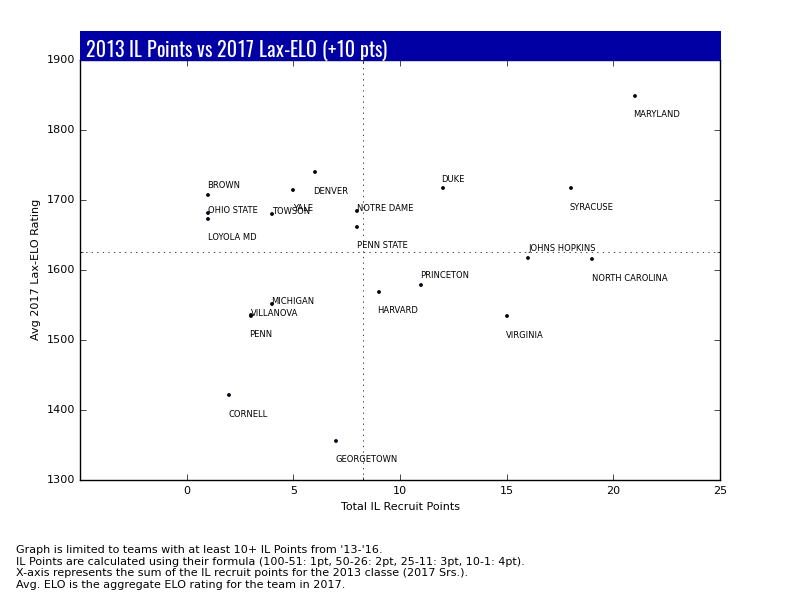