Twitter is an extremely interesting animal. It is simultaneously one of the best tools ever created for sharing ideas and one of the most nefarious channels for spreading malevolence.  It’s a platform that has become a key part of our social consciousness and a company struggling to make ends meet.  It’s among the most important ways for a brand to spread itself, yet if you focus too much on social media, at the expense of creating something valuable, what are you left with?

Twitter defies convention and classification, and as a result, there is no obvious approach if you are trying to incorporate it into your general strategy for success.  College lacrosse Twitter is not exempt from this.  On the other hand, building an online presence can be the tailwind that convinces some recruit to pick you over another school.  On the other hand, it will always be hard to argue that social media presence is something lacrosse teams should focus on given the existing demands and the limited coaching staffs.  (I’m absolutely not suggesting that coaches are managing their team’s social media presences.)

I would love to hear from some teams so that we can share some in-the-trenches stories about this, but until that flood of emails comes in, we’ll stick to hard and fast numbers.  For starters, the most basic metric of social media reach: followers.

The thing that jumps off the page, first and foremost, and is that the ACC thoroughly dominates the table, placing all 5 teams within the top 7.  Probably not a huge surprise because the ACC has historically been the dominant lacrosse conference in D1 Men’s lacrosse.  Add in the fact that each of these teams has a large non-lacrosse fan base as well, which will inevitably lead to some additional followers.

The Big Ten put Maryland #2 on the list, and in general, has the second most followers of any conference.  Considering the relative youth of some programs in the Big Ten, relative to the ACC, it’s not surprising that the list looks this way.  That said, if not for the two schools recently poached from the state of Maryland, Ohio State would be their top entrant, with “just” 17,985 followers.

A quick shout out to UMBC for having 1) a lacrosse team situated in Baltimore, 2) a huge local lacrosse culture, 3) decades of history to draw on, 4) an athletic program that boasts many D1 teams…and 559 Twitter followers.  Friendly ribbing aside, this just goes to show how some teams have prioritized social media in different ways.

Shouting into the Wind

It’s difficult, from this data, to understand how teams have prioritized social media in their overall program building strategy.  But one thing we can do is look at how each program takes advantage of their social media following.  The chart below shows the number of tweets we’ve captured since we have been tracking Twitter account activity last year (x-axis).  We then plot that value against the number of followers (y-axis). 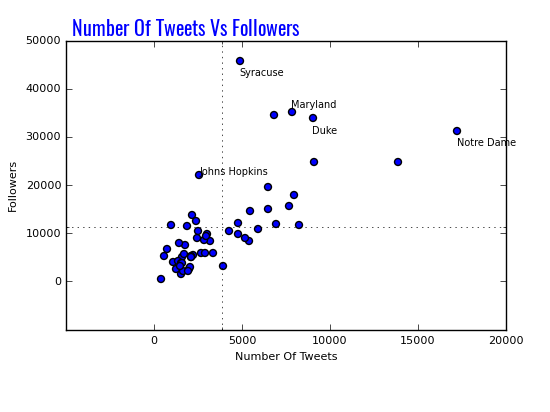 If every team were to behave in the same way, then you might expect social media activity to rise consistently with the number of followers.  The more followers you have, the more reach your tweets will have.  In other words, the ROI of a single tweet increases with every new follower, which would incentivize teams to focus more and more effort, the larger their followings became.  And the data does bear this out, but not in a uniform way.

I have highlighted a few teams that stand out.  Notre Dame, which Terry Foy highlighted in the recent Inside Lacrosse Top Incoming Class article, has put a ton of effort into their social media presence.  And in our data set, they’ve been the far and away most active tweeter (for those interested, the second most is Denver).  Given the trendline of the chart above, we would say that they’ve sent more tweets than expected given the following they’ve amassed.

If we really take the corporate analogy too far, they seem to be in growth mode, investing resources into their social media presence as a way to grow the brand.  The flip side is Syracuse; they have the 17th most active social media presence, despite having over 10k more followers than the next closest school.  Syracuse is acting like those companies who protect earnings by deferring maintenance on their equipment.  (Ok ok, I’ve taken the corporate analogy too far).

A second shout-out to Monmouth for having the highest ratio of tweets-to-followers.  The Hawks Twitter account has 3,112 followers, but they’ve sent 3,900 tweets since we’ve been keeping track.  Only two teams have a ratio over 1 (the other is Drexel).  Again, this stuff is all about creating tailwinds for yourself, so congratulations to the Monmouth leadership team for having the long-term perspective required to invest in this sort of online presence, relative to the number of people they are reaching.

For what it’s worth, Notre Dame’s follower count has grown 3.2% in the last 30 days, where Syracuse’s has fallen by .5%.  Time will tell if this approach does yield on-field benefits.  But in a world of capped scholarships, large programs that find a way to exploit their other financial advantages can reap big benefits.  If you’ve been following our recruiting series, for a school like Notre Dame or Denver, it’s fair to ask if social media presence negates some of the challenges of being so far from the national talent base?  Does that explain their activity?  Who knows (wink wink to program reps who’d like to share their story).

I’ll be curious to see how this changes of the course of the off-season and into next season.  The advantages, if they exist, are going to be subtle, so it’s not as if we’ll be able to say that any on-field benefits have any connection. Of course, if we continue to see Notre Dame’s follower count go up, and that is leading to more positive press, it will be hard to say they aren’t reaping some reward.

What do you think about all this?  Does social media presence have any value to a D1 lacrosse team?