Ohio State and Towson played the first of the two semifinal games on Saturday.  It was a very evenly matched game that turned into a classic. After two rounds of mostly duds, this game was worthy of the stage.

Congrats to the Tigers on a great season and stretch run, but the Buckeyes eeked out a win and will face the Terps on Monday.  (We recapped the Maryland vs Denver game here.) 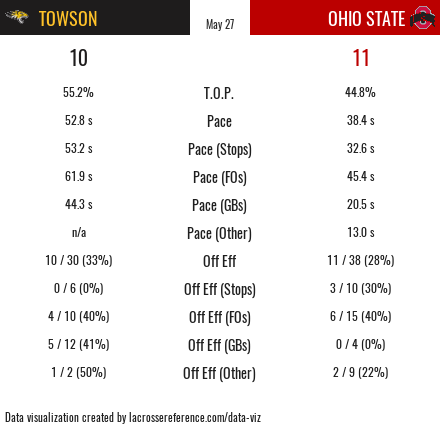 In our preview of this game, we noted how Ohio State was able to take advantage of Duke’s face-off defense to the tune of 7 goals.  Towson was not as susceptible in those situations, so it seemed like that OSU advantage might be nullified in this game.

We’ve also noted several times that Towson’s defense has aged well.  As possessions stretch on, most defenses become more stingy, but the Tigers were especially good at this.

Well, Ohio State’s FO unit won the day, scoring 6 goals on possessions that started with a face-off win. And even outside of FO possessions, they struck fast on several of those tallies.  I counted 6 goals that were scored less than 45 seconds after the Buckeyes gained possession.  Or, if you want to look at it from the other perspective, before the Towson defense was really able to dig in their heels.

Towson won the time of possession battle, but lost the war

Towson had to win time of possession to have a chance in this one.  And they did that.  But as we noted in the preview article, it wouldn’t have been a surprise to see Towson win T.O.P. and to see the Buckeyes advance to Monday.

And that is exactly what we saw.  The issue for Towson is that their time of possession advantage during the regular season (#2 in D1) was combined with three other elements: an advantage via Woodall at FO, stingy defense, and a comfort-level with the shot clock that came from seeing it more than any other offense.

Unfortunately, due to injury, they struggled at the face-off X, especially in the second half.  This team works when they can snuff out opponent runs via face-off wins, hold the ball on offense, and score in late possession chances.  When they lost the ability to control the x, one of the three legs that they stood on all year was gone.

Ohio State came back, survived the late charge, and advanced.

When I went through the stats for Towson in this one, it’s hard to point to anything especially bad.  They cleared well, they had 6 saves, they won time of possession.  They didn’t win many face-offs in the second half, but they did pick up 27 ground balls and only turned the ball over 6 times.

I don’t really see anything here that suggests that Ohio State had their number or that the Towson team didn’t show up in Foxboro.  It seems to fly in the face off analytical rigor, but it feels as if the Tigers laid it all out there in the first half and then when Ohio State mounted their comeback in the 2nd, the Tigers just didn’t have quite enough left to weather the storm.

What I’m proposing is that perhaps the cumulative effort put in through out the course of a season can be quantified.  And perhaps there is some measurable advantage that deeper teams have as the season melts towards Memorial Day.  There may be nothing there, but it’s worth looking into.  And it may just provide some explanation for why this game started 7-3 in Towson’s favor, but ended with an 8-3 Ohio State 2nd half.

‹ Championship Weekend: Maryland vs Denver Recap › Thank you for a great season