Finally, some entertaining NCAA tournament games.  Saturday brought us two last second victories (Towson vs Ohio State recap here) that made up for all the blowouts of the previous rounds. As an analytics website, there are always interesting statistical trends to explore, no matter the final margin.  As a fan, blowouts are no fun.  And we are fans first, so thank you to the Pios, Terps, Buckeyes, and Tigers for providing a Saturday to remember.

But you don’t come here to hear me wax poetic about the beauty of the game.  (Maybe you do, I don’t know.)  You come here for the game within the game; the story that the numbers tell.

And the numbers say that Maryland advanced by doing their best Denver Pioneers impression.  It was just that they did it slightly better than the Pios did. 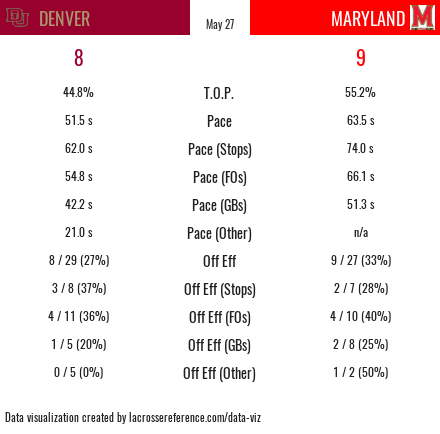 Maryland was the more deliberate team

As we noted in our preview article for this game, Denver has led all of Division I in time of possession this year.  They combined a surgical offensive attack with an all-timer at face-off to create the largest possession advantage in the nation.

In this one though, the Terps used a gritty face-off day from Garino and Henningsen to counter Trevor Baptiste.  But the face-off win rate is just the first part of this story.

Maryland came into championship weekend as the fastest of the 4 combatants, but still only 46th nationally.  It was not the final four you were hoping for if you were a fan of the perceived trend toward faster play in men’s lacrosse.  (IL did a great article about this trend.)

So of course Maryland came out and demonstrated extreme patience on offense.  On average, they took a full 63 seconds before launching their first shot of the possession.  At the end of the day, they’d held possession for 33 minutes.  The way their defense seemed to tire toward the end, you have to wonder if a defense forced to play even 3 extra minutes might have surrendered the tying goal at the end.

Faceoffs were a wash

Trevor Baptiste’s season low in faceoff wins was 11 coming into this game.  The Terps held him to that number in this game.  That may be the single biggest stat explaining how they were able to advance.  He also only took 21 faceoffs, which is the lowest total since Denver’s April 22 win over Providence.  Before that, you have to go back to Feb against Canisius to find a game where Baptiste lined up fewer times.

So Maryland’s strategy on face-offs worked out well in two respects.  First, they battled Denver to a virtual draw in terms of possessions gained.  But they also minimized the number of face-offs overall, by contributing to a slow pace that meant fewer goals.

Maryland was able to neutralize the studs

Two games doth not make a trend.  That said, one explanation for Maryland holding the Denver offense in check is that they neutralized the stars, and there wasn’t enough contribution from the Pioneers’ supporting cast.

In the same way that they did against Albany, Maryland was effective in limiting the top guys for Denver.

Shout out to Marano, Donahue, and Reid for throwing in five points combined.  But it wasn’t enough on a day when the Terps limited the top guys.

Teams are often put into a no-win situation: put extra effort into limiting the stars but accept the risk that the supporting cast will exploit weaknesses elsewhere.  Maryland clearly doesn’t have to make that trade-off.  They focused on limiting Connor Fields against Albany.  It didn’t burn them.  They put Muller on Cannizzaro in this one.  It didn’t burn them.

This will be a huge factor in the game against the Buckeyes.  Can Maryland’s defense limit Fannell/LeClaire/Jasinski trio without letting the other guys for the Buckeyes go off?