The Denver vs Notre Dame quarterfinal game got us thinking about shot clock data.  And I’d be lying if I said that a certain Notre Dame fan didn’t help stoke our curiosity:

To be a bit more specific, we wanted to get a better sense for the real numbers behind timer-ons.  How many have been called?   When are they called? How long does it take before they are called?  How does time and score affect the officials’ decision making?

We have data on every stall warning across the 2015-17 seasons.  That includes the following counts by year:

The intent with this article is to share some data and see if there are additional, more detailed analyses that can be done.  There are certainly some interesting trends here, but we aren’t at  the drawing-conclusions stage yet.  What follows is some simple data visualization of three years worth of shot clock data for your viewing pleasure.  Let me know where you’d take it from here.

How many have been called?

Since we only have 7 games remaining (at the time of writing) left in the season, I’m fairly confident that we aren’t going to reach 2016 levels this year.  That means that on a per game basis, fewer shot clocks have been called.  I have no idea if that is because they’ve been less likely to call a shot clock in similar situations or whether there have been fewer worthy situations this year.

But we can say for sure that the first year of the shot clock, we saw the fewest (2015).  Last year, we saw the most.  This year seems to be settling somewhere in the middle.

Digging into the quarter-by-quarter breakdown, we can see that far more shot clocks are called in the 4th quarter.  Not especially surprising. 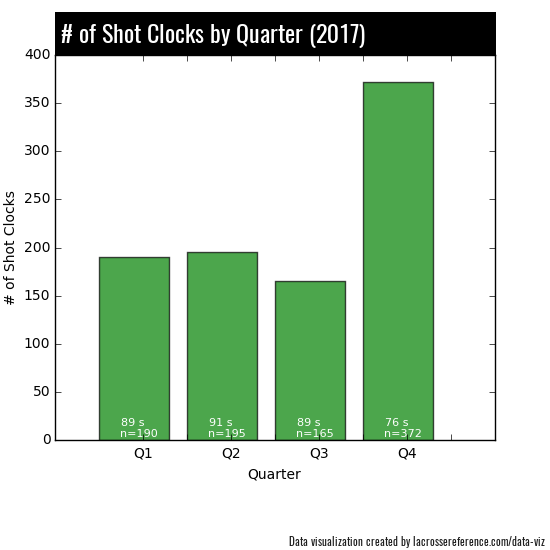 How long does it take before they are called?

This is a deeper question than it may seem.  One short answer is that they are called much more quickly if the game is in the 4th quarter. 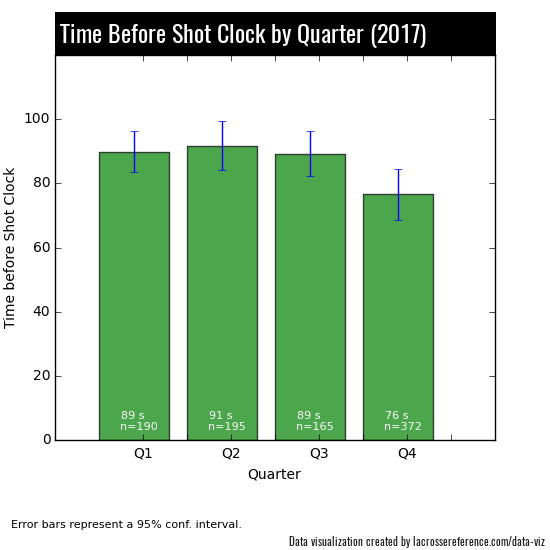 Statistically speaking, there is a chance that the true mean for the 4th quarter is actually no different than for the previous 3 quarters, but given that the pattern repeats itself in 2015 and 2016, I feel confident that there is in fact a quicker trigger in the 4th quarter.  (See the appendix for the 2015-16 charts).

In theory, the rule book makes no distinction for quarter when determining how to enforce the shot clock.  But I don’t think anyone would argue that a quicker trigger in the 4th is against the spirit of the rule.

However, in the debate about a permanent shot clock, it’s important to note that the gap between 4th quarter timer ons and all others would go away.  You’d have an entire game that looks like today’s 4th quarters.

How does time and score affect officials’ decision-making?

We sort of tackled this a bit in the prior section.  Officials are much slower to put the shot clock on if it’s not the 4th quarter.

But time remaining is one factor, score is another.  And in fact, we see that score has a much bigger impact on whether a timer on is called. 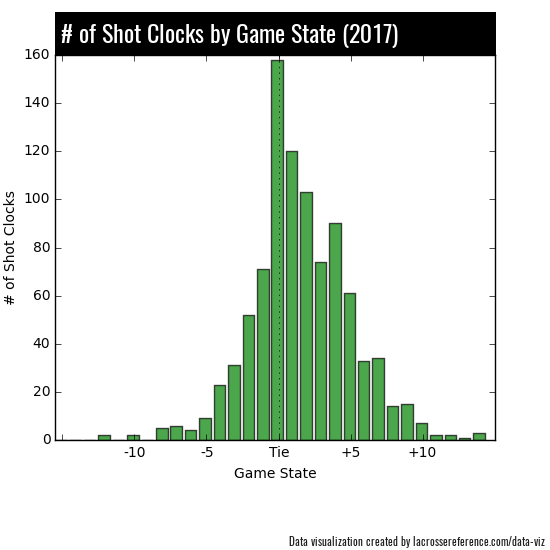 And to be clear, that’s mostly because a team is less likely to actively initiate offense when they are in a close game situation.

The most shot clocks have been put on in tie-game situations.  This was a bit surprising to me.  I would have guessed that more shot clocks would be assessed with one goal leads than in tie-games.

I suppose that a team holding for one shot in a tie-game situation might be shot-clock-worthy because 1) they want to hold the ball as long as they can and 2) the defense doesn’t have the incentive to press like they would if they needed to get the ball back.  Either way, it’s interesting.  Curious what the group sees in this data.

The other factor where score plays a role is in how long it takes for an official to decide to put on the timer. 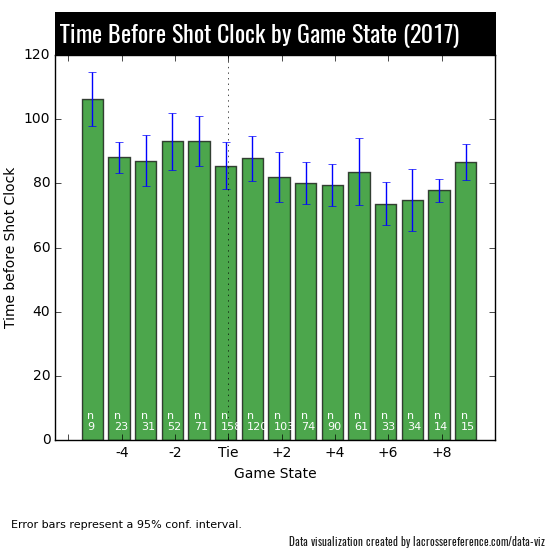 As we would expect, there is a downward trend in the chart.  The larger the attacking team’s lead, the shorter the amount of time before the shot clock is put on.  There does seem to be a point at which officials become more lenient.  Again, given sample sizes and our 95% confidence interval, we can’t say for sure that the downward trend is not a result of randomness.  And in fact, while we see the downward trend in 2016, we don’t see the same leniency in routs.  (See below for 2015-16 charts.)

What has changed since the shot clock rule became law?

There are some interesting trends in the data when you look at how the shot clock has evolved in the past three years.  All the charts are below, so feel free to dig into them yourself.  But I’ll list out a few things that I noticed.

For whatever reason, implementation of the rule changed from the first year to the second.  And if you recall from above, we also saw an increase of .27 shot clocks per game.  This year takes us back to how they were called in Year 1, albeit with slightly more per game than in 2015.  There are many plausible explanations for why the center of shot clock gravity would oscillate like this, probably enough for an entire article.

I would also be curious to know if this is something that is being actively managed by the NCAA or whether it’s just officials getting used to the new system.  In theory, the shot clock should give losing teams a better chance to come back.  If the NCAA is trying to optimize for this, I could imagine some sort of model that they are trying to calibrate.  Is there a secret officials report of how quickly they are putting on shot clocks?!?! We need someone on this inside.  (But seriously, if anyone knows anything about how officials are instructed here, would love to know.)

Lastly, 2016 was in many ways a more by the book year for shot clocks.  One key area is how they were called in blow outs.  In 2015 and 2017, there was an uptick in the amount of time before shot clocks were called once the attacking team was up by 6 or 7 goals.  It may be that the officials made some mental determination that the losing team wasn’t going to come back, so why call the shot clock.

In 2016, we see know such blow-out trend.  Could they have been coached after the 2015 season to be more by the book?  If so, why not this year?  The error bars show that there is in fact a real trend (not just noise) in both 2015 and 2017.  Odd.  (And again, any qualitative insight into how they are enforcing this rule would be fascinating.  Email me.)

Here are all the charts

Seconds Before a Shot Clock is called (By Quarter) 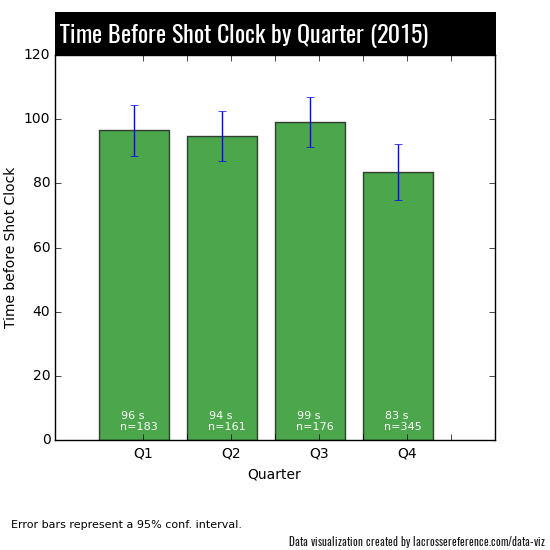 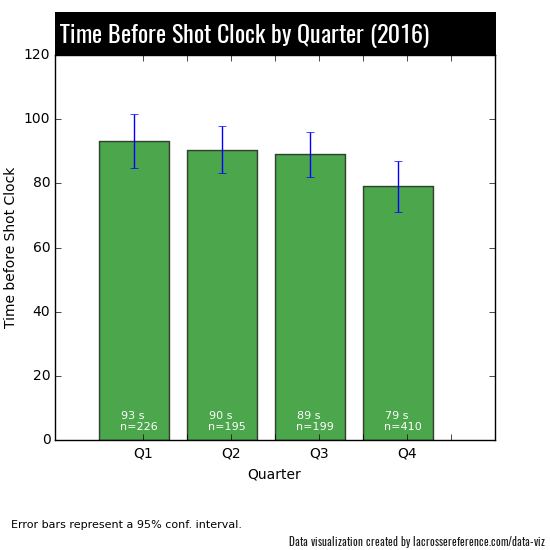 Number of Shot Clocks put on by the various score margins 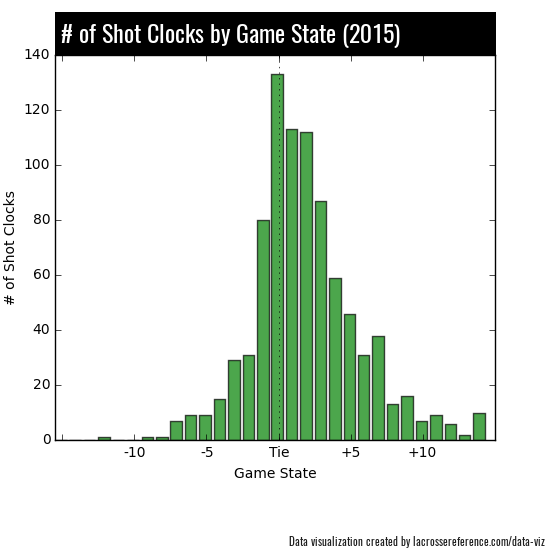 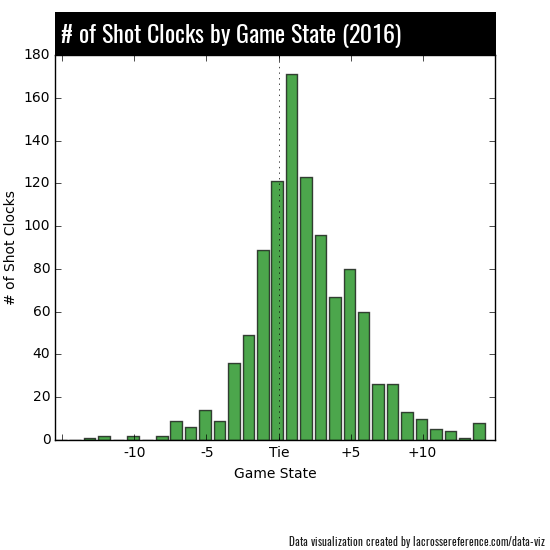 Number of Shot Clocks by Quarter 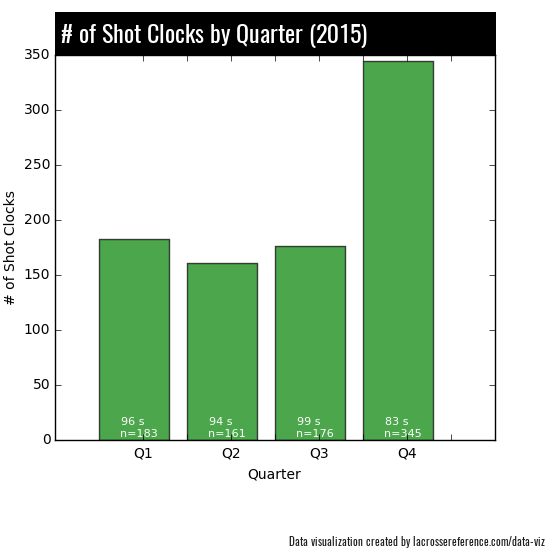 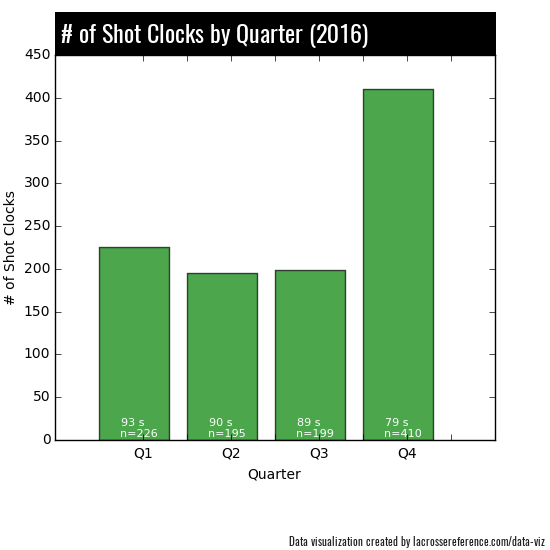 Seconds before Shot Clock is put on (by score margin) 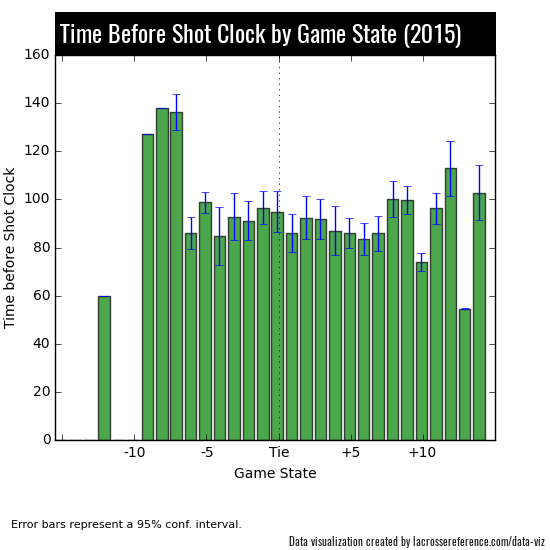 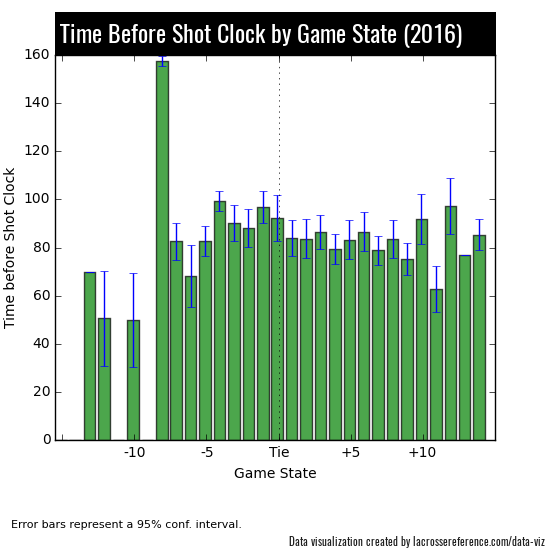 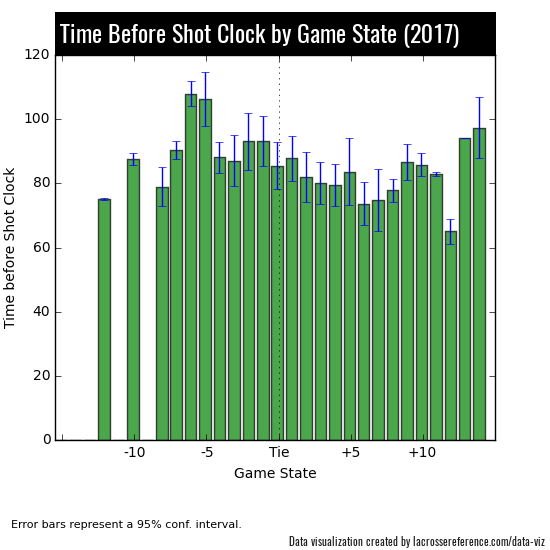 ‹ NCAA Lacrosse 2nd Round: Denver vs Notre Dame Preview › Who is playing in the Lacrosse Final Four?