History suggests that this will be a tight game. Syracuse just seems to play in tight games, no matter what. It’s as if they’d rather risk losing than play in a blowout. As a fan, that is just fine with me. But that is not the point of our Towson vs Syracuse Preview.  Programming note: you can see this game at 12 ET on Sunday on ESPN2.

We could simply leave it at that: it’s going to be close, and someone is going to win in an exciting finish. But that would be an injustice to you, the data-curious reader.  So what can we say about this game?

To start, Syracuse is a narrow favorite.  Lax-ELO thinks that they’ve got a 53% chance of advancing to championship weekend. 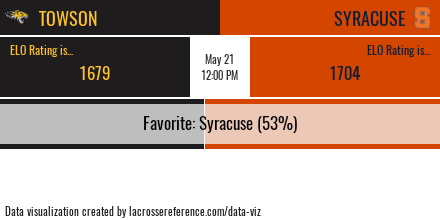 It is well-documented that Syracuse has won 9 of their 11 one-goal games this year. I’m not going to venture into a regression-to-the-mean discussion here (although that is 100% a valid point), but I will say that despite Syracuse’s stellar record, our ELO model is not going to be as impressed by a one-goal victory as by a wider margin.  Even though Towson had an inferior record against inferior opposition, ELO thinks that this game is a virtual toss-up.

But that is just the surface level estimation.  There are several things that could swing this game in either direction.  For example…

The Syracuse defense has not been stellar this season.  This is a team that wins by outscoring their opponents.  And there is nothing wrong with that.  It’s gotten them this far after all.

But there is some variation in how the Syracuse D has performed in different game situations.  Fortunately for our feeble minds, the split is pretty well delineated by a simple heuristic: unsettled vs settled.

When the opponent is starting a possession with a defensive stop (i.e. Syracuse shoots and misses or the goalie saves the shot), Syracuse is actually pretty good on defense.  In these situations, Syracuse defense is ranked 28th in the nation.  They allow a goal off of a defensive stop only 25% of the time.

A quick Google search didn’t find many references to an aggressive 10-man ride for the Cuse, which may mean that this is just caused by a defense that is more comfortable when they’ve had a chance to set up.  Which would mean that the alternative is a defense that is vulnerable in unsettled situations.

And the stats bear this out, with Syracuse the 57th ranked and 47th ranked defense after opponent ground ball pickups and faceoff wins respectively.

Keep an eye on whether the Towson offense is able to take advantage of this disparity.  Or is they even try.  This is a team that was the 3rd slowest team to get a shot off per possession in all of D1.  So looking to be aggressive in unsettled situations may not be a natural fit for them.  (They are 34th fastest after face off wins, so that could be an area where they are more comfortable.)

Bottom line is that the Syracuse defense is not a first-rate unit.  But that doesn’t mean that Towson should be attacking willy-nilly.  It seems that unsettled situations is an area where they can run up some goals, assuming they are willing to take the plunge required to push the pace.

Can Towson win the time-of-possession battle?

Towson enters this game as the #7 team in time-of-possession.  They’ve had the ball for nearly 32 minutes per game this season.  But this doesn’t adequately describe how important possession is to the Tigers. 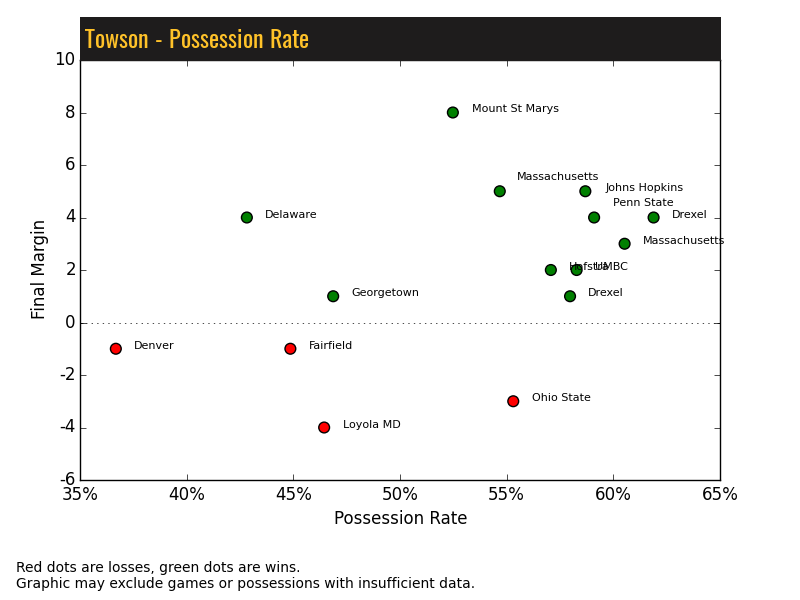 Compare that to Albany, another top possession team.  The Great Danes have had 5 games where they didn’t win the time of possession battle.  In those four games, their record was 4-1.

And to some degree, this makes sense.  Towson’s defense is the strength of their team.  They are rated 9th in defense and 37th in offense.  The longer your defense is having to chase the opponent around the defensive end, the more tired they get, and the better chance that the opposing offense is able to break through.

You might say, sure, but the same goes for Syracuse, so who cares?  Not so fast my friend…

Towson’s defense is good.  Just in general.  It is a good defense.  But a deeper look shows that they become better the longer the possession lasts.

So Towson is a team that has a bigger than average increase in efficiency as the possession crosses the 60-second mark.  May not seem that important until you look at the other piece of statistical minutiae. 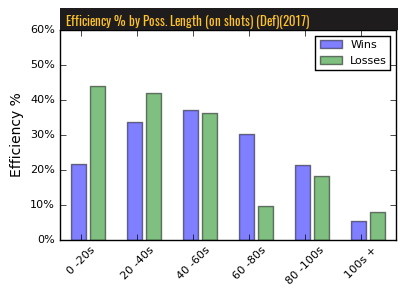 In the games that Towson has lost, opponents have been able to find good chances early in the possession.  They have scored on 44% of their possessions in which the first shot is taken within 20 seconds of gaining possession.  In losses, they’ve only clicked at a 21% rate.

In the 60 to 80 second bucket, we see that teams who have beaten Towson are only scoring at a 10% rate vs 30% for the teams that Towson has beaten.  This may seem counter-intuitive, and I’ll admit, it does seem counter to the point about time of possession.  But the bottom line is, if you are playing Towson, and you can choose to be good in either early shot possessions or more patient sets, you should take the former every time.

Now Syracuse is not a team that feasts on a bunch of quick goal possessions.  That’s not their wheel-house.  But against a Towson team that settles in the longer you wait, the Orange would be well-served to do what they can to generate good looks early in the possession.  If they wait to shoot until the Towson defense is settled, they may win the battle, but lose the war.