Along with Maryland and Albany, Notre Dame / Denver is our other rematch of a previous game this season.  In that one, Denver squeaked out a win 12-11 on a pretty incredible Connor Cannizzaro last second wrap around goal.  This time around, the stakes are raised as a trip to Boston is on the line.  I mean, I guess the losing team could still go to Boston, but you know what I mean.  So let this Denver vs Notre Dame preview incorporate prior lessons learned with a dash of stats to get you ready for Saturday’s game.

Our Lax-ELO model thinks that the Pioneers have a 63% chance to advance to championship weekend.  Denver comes in with the 4th strongest Lax-ELO rating (1719).  The Irish are a middling 18th (1622). 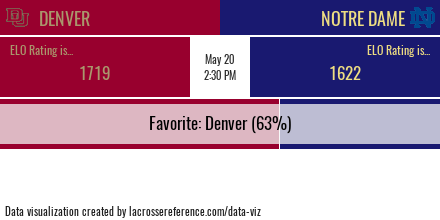 Notre Dame enters this tilt with the 21st ranked offense in D1 and the 17th ranked defense.  They have the 43rd deepest roster in D1 and have held the ball less than almost every other team (69th in time of possession).

Denver boasts the #1 efficiency offense in the nation.  Unfortunately, they’ve backed that up with the 56th ranked defense.  Thanks to Baptiste at x, they are the #1 time of possession team, averaging nearly 33 minutes per game.  Denver is one spot below Notre Dame in terms of roster depth.  These are two top-heavy teams.

We don’t typically talk much about goalie play here at LacrosseReference.  Mostly this is because of a lack of available data.  We know how many shots a goalie saved vs saw, but these are very public stats that anyone can pore over.  Simply not much added value we can provide there.  If there were data on shot location, then that would be worth digging into, but alas, not yet.

But this is one situation where goalie play will have an outsized impact.  For two reasons: 1) Denver does not turn the ball over and 2) they have the ball a lot.  The math here is simple, Denver has more possessions than you because of Baptiste, and they waste fewer of them with turnovers than almost anybody (6th in the nation).  More possessions + Fewer wasted possessions means more shots on goal.  If Doss has an off-day and too many of those shots go in, Notre Dame just doesn’t have the firepower to overcome that.

North Carolina’s win over the Pioneers could hold some clues for Notre Dame. 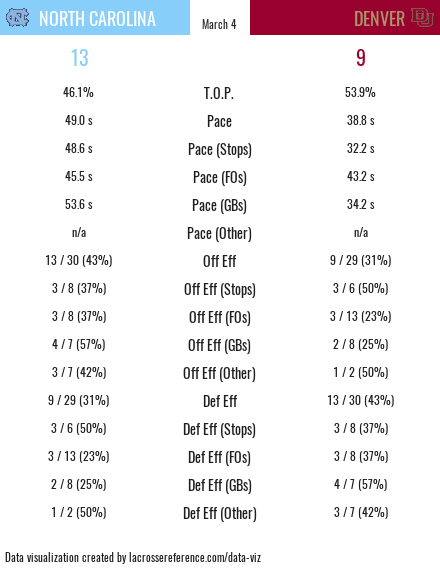 In that Carolina win, Balkam had 17 saves.  Denver had 13 face offs wins, but was only about to convert three of those into goals.  The Heels scored 3 goals on 8 face off win possessions.  True to form, Denver only had 6 turnovers.  They scored their 9 goals on a whopping 43 shots.

It was the kind of game where North Carolina sat back in defense, tried to prevent easy goals, and hoped that their keeper was up to the task.

It’s a model that Notre Dame could use to beat the Pioneers.

Notre Dame would be wise to be patient on offense

In the first game, Notre Dame was really quick to pull the trigger on offense.  On theie 13 ground balls, they waited only 11 seconds before taking a shot.  There isn’t anything inherently wrong with quick shots.  And since Notre Dame has been doing this all year, we normally think that staying the course is their best bet.

But there are some mitigating circumstances with the Irish.  First, Denver is #1 in the nation in time of possession.  Second, Notre Dame is a very top heavy team, meaning that their top lines have had to shoulder more of the burden this year than some other teams.  As the season wears on, those 4th quarter slides get harder and harder to make.

The last point in favor of a slower Notre Dame attack is that they haven’t been all that good in possessions where they take a quick shot.  The chart below shows the Irish compared to their ACC brethren.  You can see pretty clearly that when the offense takes a shot before 60 seconds have elapsed, they are sub-par.  When they wait 60 seconds or longer before ripping a first shot, the improvement is dramatic. 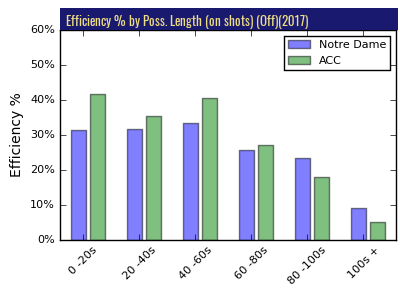 Now that said, the counter argument is that if Notre Dame is slowing it down, then that means fewer possessions, which means face offs become more critical, which might not be a winning idea.

For what it’s worth, these teams won’t have to deal with heat though, with temps only expected to be in the 60s.

Fight to win or prepare to lose?

Notre Dame has an interesting strategic decision to make around how to defend the Pioneers’ face-off offense.  It’s no surprise that Notre Dame is going to lose the majority of the face offs in this game.  And they are going to lose ~100% of the face offs that are won cleanly.  I realize that’s not rigorous statistical analysis, but Trevor Baptiste defies numbers, so why try?

Anyway, the question for Notre Dame becomes, if you are going to lose the face offs anyway, how vigorously do you send your wings in?

In other words, do you all but concede the face off in order to minimize the number of goals Denver is able to score off of those possessions.  The numbers say that might not be such a bad idea.

The chart shows the Notre Dame defense’s efficiency marks after face off losses for each game.  In games where they’ve allowed the offense to score on 26% of those possessions, they have exactly one win.  In games where the opponent is under 26%, they are undefeated. 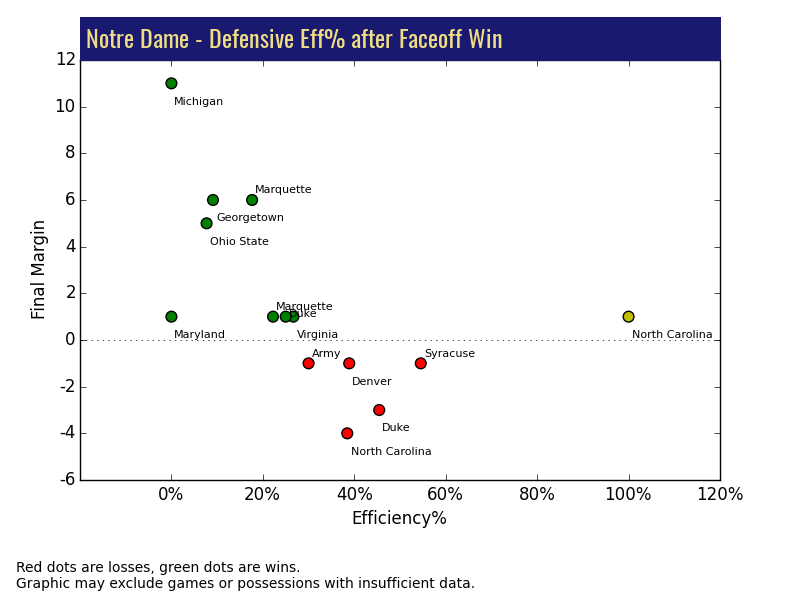 If you are Kevin Corrigan, how important are face off wins to you?

Denver has tended to be somewhat of an all or nothing offense, even more so in their first game against the Irish.  In that one, they scored 7 goals on 18 face off possessions and just 4 goals across their other 23 possessions.  If you are Notre Dame, it’s got to be tempting to say: “screw it, we aren’t going to win these face offs so might as well batten down the hatches and prevent face-offs from turning into goals.”

Notre Dame was the team heading into this tournament with the largest player question marks.  Would Garnsey be healthy?  Was Perkovic’s wrist going to allow those 100mph lasers?  Would the Irish get bounced by Marquette?

They clearly answered that last one, but as for Garnsey and Perkovic, they combined for one goal on 11 shots and 2 turnovers.  Not exactly an emphatic “We’re Back…” type of performance.  But even with that, it seems like the questions around Notre Dame’s ability to compete in this tournament have dissipated a bit.  And that is largely down to one guy: Mr Gleason. 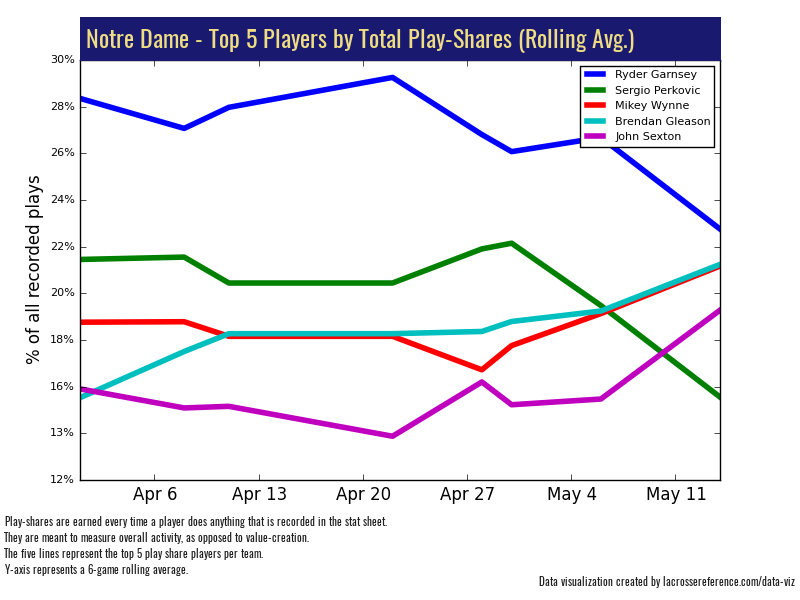 Notre Dame’s play-shares chart shows that Gleason has been the guy to fill the shoes left by injuries to Garnsey and Perkovic.  His five goals against Marquette are one of the biggest reasons that Notre Dame is in this game at all.  The steady rise over the course of the season represents a player shouldering the burden of an offense.

Mikey Wynne has increased his output a bit in recent weeks, but he’s not creating his own offense.  Instead, it’s been Gleason taking the reins.  If Perkovic and Garnsey were able to build up some more health points over the past week, this offense looks a lot scarier than many would have envisioned precisely because of the reps Gleason has under his belt.  If the two stars are able to return to full strength, this offense may have actually benefited from their absence.

One last thing to note: John Sexton is on this list.  Our play shares model calculates the number of recorded plays for each player.  As we all know, recorded plays tend to be offensive rather than defensive.  On offense, every shot is recorded, but on defense, only caused turnovers will result in a defenseman’s name being written down.  So for defenseman to make any team’s play shares chart is pretty impressive.

And his play shares have been increasing!!!  Just wanted to point that out for those that love defense and don’t get to see their favorites players mentioned much in the stats world.

Here’s the in-game win odds chart for the Pioneers:

The advanced stats recap shows a fairly even possession game, but Notre Dame had to overcome a 10 possession deficit. 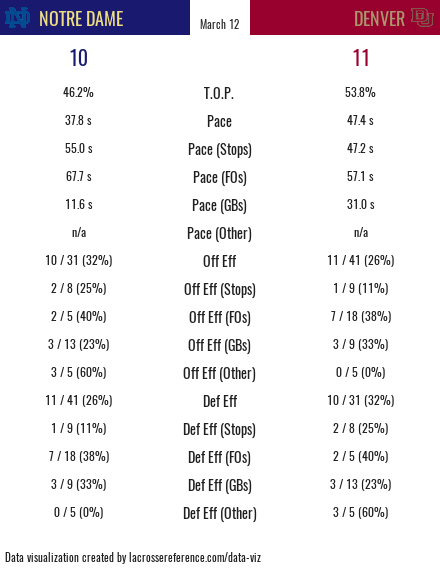