This could and probably should have been left as a potential finals matchup.  We said it.  The committee could have easily swapped Penn State and Albany so that should the Great Danes make it to the finals, then they’d get the Terps there.  Instead, we are left with this game in the 2nd round.  So enjoy this Albany vs Maryland Preview and think of what might have been.

On the bright side, we lacrosse fans will get to see these two teams battle for a second time this season.  Be thankful for that.  This game my not have the ESPN-led-hype that it might if it were played on Memorial Day, but we know what’s up.  We understand that the winner of this game takes over pole position in the hunt for the 2017 title. We know better than to treat this as any old 2nd round game.

Albany is actually a decent favorite to win this game according to our Lax-ELO model.  They come in as the far-and-away #1 strongest team, with Maryland in 2nd place.  (Good job committee.)  The model gives them a 62% chance to advance to championship weekend. 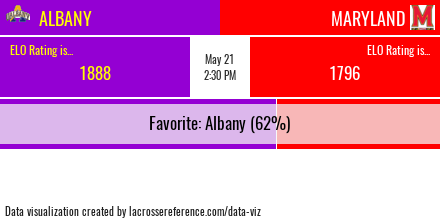 It’s tempting to define this game as Rambo vs Fields.  Both are Tewaaraton finalists.  Whoever wins that battle will push their team onto Boston.  But the reality is more complex than that.  Here are a few things that will really determine the outcome of this one.

Do we play fast or do we play slow?

The pace that this game is played at will be critical.  This is the most stylistically different pair of teams going against each other in round 2.  Maryland comes in as the 46th fastest team in D1, taking an average of 43 seconds before taking an initial shot on average.  Albany, heirs to the Thompson legacy and the wizardry that comes with it, is the 9th fastest team.  They take 35 seconds on average before firing away.

Will this game be an up and down affair?  Or do they settle into a more deliberate pace?  Does it matter?

There is a statistical backbone for Maryland preferring a slower pace.  In the chart below, we can see that in the games they’ve lost, Maryland’s defense tends to face shots early in possessions at a higher rate. 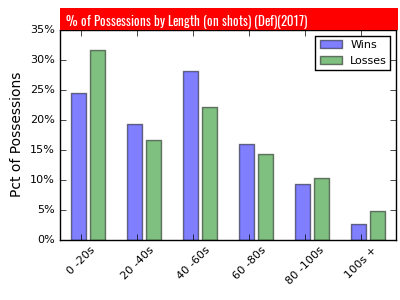 In their 3 losses, opponents took a first shot within 20 seconds of gaining possession on 32% of all possessions.  In their 13 wins, opponents were able to get a shot off in this time range only 24% of the time.  The opposite is true for the Terps until you get to the 80-100s time range.  The teams that have beaten the Terps are the ones that have attacked early.

Whether the Terrapins are able to prevent Albany from making this a track meet will be key to the eventual outcome.

It’s worth noting that in the first matchup, the game did appear to be played at Maryland’s preferred pace.  Both teams attacked with more patience than their season averages.

These teams are really good

A little bit of “how the sausage gets made” for you.  When we prepare these data-focused previews, the process is as follows:

The problem in this game was that I hardly got passed point #1 for either team.  I was really struck at how few things I was able to come up with.  And there are a lot of charts to look at.

These are just two really good teams that don’t have a lot of obvious exploitable weaknesses.  Kudos to Scott Marr and the Albany program for evolving to this point.  And congrats to John Tillman and the Terps for always being in this situation.

I hope everyone can take a moment to enjoy this one on Sunday.

We came up with a concept called play-shares, which measures the amount of activity, good or bad, for each player.  The best way to explain this is an announcing favorite: “I think that’s the first time I’ve called [Player X] today.”  By plotting this metric over a season, we can see how individual players rise and fall and how their contributions change.

I think we will need to do a more in-depth post about the impact of a long grinding season at some point, but for now, let’s just say that the concept of a “freshman wall” is unproven but plausible.

Is that what we are seeing with Albany’s TD Ierlan? 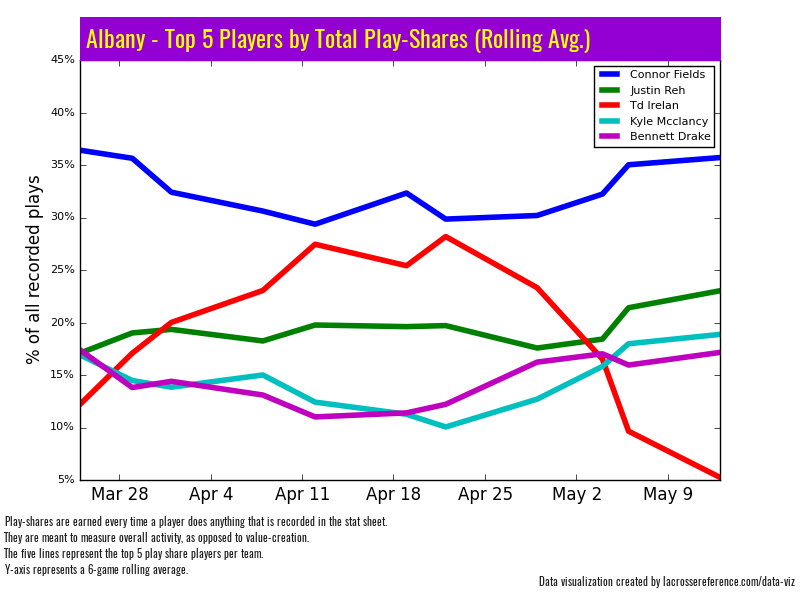 A look at his play shares chart shows that he’s dropped off a bit since early in the season.  This is part reflects the fact that he’s stopped shooting as much as he did earlier in the season.  But in general, the number of marks he’s making in the stat sheet have fallen off.  (Note: because this is a rolling average, the final data point reflects the last 6 games.)

This includes many stats (shots, goals, face offs, turnovers, caused turnovers), so it’s not a definitive view of any particular performance area.  This doesn’t mean that his FO win rate has dropped, for example.  Just that he’s not filling the stat sheet like he did early in the season.  It also means that Kyle McClancy, Connor Fields, Justin Reh and Bennett Drake have had their play-shares increase.

Now, if Ierlan’s going to continue to win face-offs at a high rate, maybe we don’t care if he just runs off the field or whether he goes down to take a shot.  But the circumstantial evidence is there.  He’s a freshman.  His play shares have been declining.  He’s taken 426 face offs this season.

I reserve the right to say this was just circumstantial if he has a great game, but if he struggles, think about that play shares chart.

If TD Ierlan is maybe hitting a freshman wall (or maybe not), Connor Kelly is running through the wall like the Kool-Aid man.  This is a guy that has steadily increased his play-shares through out the season, taking some pressure off the shoulders of Colin Heacock specifically, but the entire offense in reality. 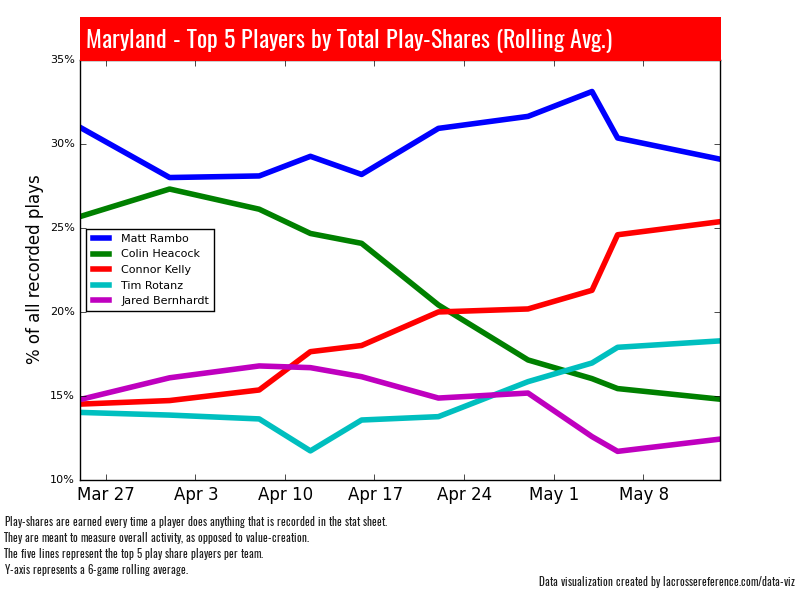 Having another option that defense must plan for makes everyone’s job easier.  He only had one point on 5 shots the first go-round with the Great Danes, but in the 6 games since, he’s scored 19 points while firing off 47 shots.  And he’s become an increasingly integral part of this offense.  According to the chart above, it seems that he’s replaced Colin Heacock, but this is not really the case.

If anything, he’s allowed Heacock to limit his load to be more manageable.  Heacock’s last 4 games have featured 11 points on 20 shots. Not exactly the resume of a bench-warmer.  Having Connor Kelly’s contributions means that the Terps have a more balanced attack that is harder to stop.  I’d always rather have offensive output spread around rather than concentrated with one player (see Tucker James/Bryant).

Will Albany’s depth play a role?

Another reason that pace may be important is that Maryland is not as deep as the Great Danes.  Albany is #3 in the nation in roster depth, which means that they rely less on the top stars to produce. Maryland is 39th.  It’s a long season, and fatigue can play a role this time of year.  A fast pace could benefit the Great Danes simply because they have more players who’ve had significant game experience.

This is a relatively new concept for us, and it’s not totally clear whether this metric predictive of anything.  All we can say for sure is that Albany has had more players get meaningful experience than Maryland has.  If there is an injury or the game ends up being really fast paced, the “next man” up for the Great Danes is going to have had more experience than the “next man” up for the Terps.

This will certainly not be the thing that people point to should Albany win, nor should it be.  Think of it more like a headwind that Maryland may have to face.

Obligatory meteorologist shout out: weather may help the Terps here.  The forecast for UD on Sunday calls for a high of 72 with clouds.

It was in April.  It was a mid-week afternoon game.  It was amazing.

Maryland survived with a 12-11 victory as part of a pretty awesome 3-win week.  Connor Fields almost tied the game up with a “from-his-butt” pass to Justin Reh with 1 second left, but the shot never reached the cage.

The rest of the advanced pace/efficiency stats looked like this: 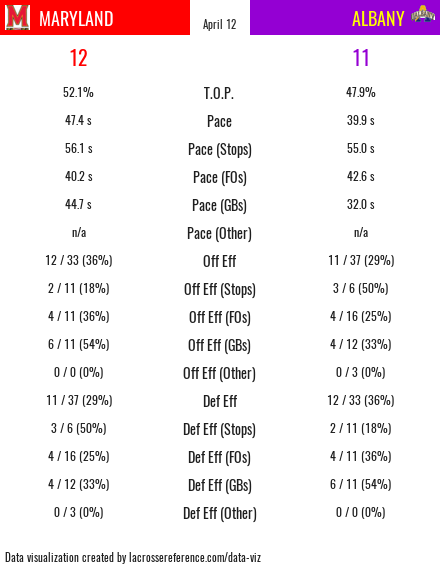