Loyola vs Ohio State has been one of the more talked-about games this weekend.  Mainly because everyone is in agreement that Loyola is one of the tougher unseeded teams, which doesn’t seem a just outcome for the team who earned the #3 overall seed.  But that is the world that we live in, where matchups are more geographically determined than anything else.  And if OSU has designs on a championship weekend appearance, these are the types of games that they need to win.

Let’s start with the basic stats for both teams.

Per our Lax-ELO model, Loyola enters this game as the #7 strongest team in the country.  Ohio State clocks in at #9.  On the surface, these are two very evenly matched teams, with maybe a slight edge to Ohio State because of their home field advantage.  And in fact, Lax-ELO thinks that the Buckeyes have a 56% chance of advancing on to the next round. 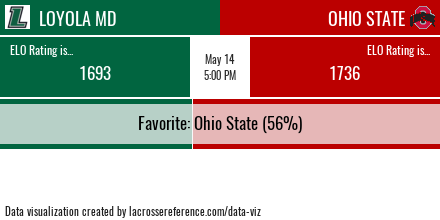 Digging into some of the pace and efficiency metrics tells a similar story.  Loyola has the #9 ranked offense and the #12 ranked defense.  Ohio State is #18 and #21, respectively.  Loyola played in the easier conference, but the average ELO rating of their opponents (at the time of the game) is

In terms of offensive style, we can start to see some variation.  Loyola is the 22nd fastest team in the nation, taking a first shot after an average of 39.3 seconds with possession.  Ohio State ranks 52nd in the nation in this statistic, averaging 43.2 seconds before taking their first shot.

And both teams are on the upswing, with Loyola coming off a Patriot League title while Ohio State fell by one to Maryland in the B1G conference tournament.  Indeed, you can see the rising tide for both teams through their rising ELO ratings. 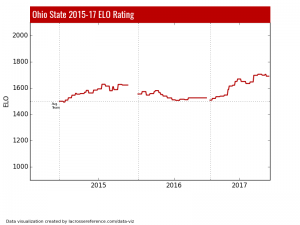 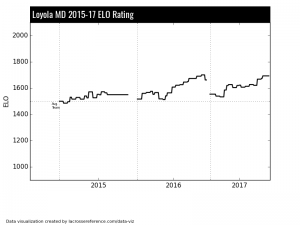 All in all, the pundits are right, this will be a tough, evenly matched game between two teams who both have a chance to advance to the second weekend.  Rejoice lacrosse fans!

Faceoffs will have a big impact on who advances

Generally, when we talk about faceoffs playing a big role, it’s a proxy for possession.  Team A has a great faceoff guy, and he’s going to dominate possession.  This puts extra pressure on each of Team B’s precious chances, blah blah blah.  And to a degree, that is true here as well.  Jake Withers has won 67% of his faceoffs this year for the Buckeyes.  Graham Savio tops the list for Loyola at 58%.  Hard to deny that the Buckeyes will have an advantage in this area.

But the much more interesting thing to look at is what happens after Ohio State wins their faceoffs.

The flip side of that is the Ohio State offense, #18 overall, but #5 in efficiency on possessions that begin with a faceoff win.  After winning a faceoff, they score 39% of the time versus 26% on all other possessions.  And it doesn’t necessarily have to do with quick strikes.  As we mentioned above, Ohio State is one of the slower teams in D1, regardless of how they gain possession.

One explanation is that defenders, having just given up a faceoff win to Withers, are desperate to make a stop.  If you don’t think your faceoff guy is going to get the ball back if the opponent scores, you might press to ensure you don’t give up a goal.  Pressing never ends well.

But if Loyola, and their shaky faceoff defense, succumbs to this temptation and Ohio State is able to get on a run of very productive faceoff possessions, it could be hard for the Greyhounds to overcome.

Watch whether Loyola is able to get good chances in transition

The offensive stat that stood out the most to me when looking at Loyola’s numbers had to do with unsettled possessions.  As we discussed, Loyola was a top 10 offense this year.  But on possessions that start with them picking up a ground ball, they are #2, scoring at a 34% clip.  What’s more, they’ve had 209 such possessions this year, far more than the other top teams.

Keep an eye on whether Ohio State is able to regroup enough to slow the Greyhounds in these transition opportunities.  If they can, they’ll take away one of Loyola’s biggest offensive weapons.  If they can’t, then Loyola will be able counteract the Buckeye’s advantage at the faceoff X.

One last small thing that stood out in Loyola’s numbers was their efficiency after defensive stops in wins vs losses.  In games that they won, their offense scored on 38% of the possessions that started with the defense backing up or stopping an opponent’s shot.  In losses, they scored on 18% percent of these possessions.

Every team is less efficient in losses than wins, but the magnitude of the difference in this category is striking.  If clearing were not the issue, than we’d expect a difference of 6-9 percentage points. The fact that they are 20 percentage points worse in losses suggests that clearing plays a big role in this.

Keep an eye on whether they are able to get from defense to offense after an Ohio State missed shot. 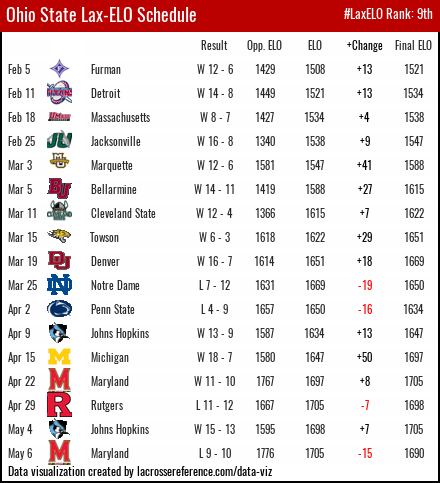 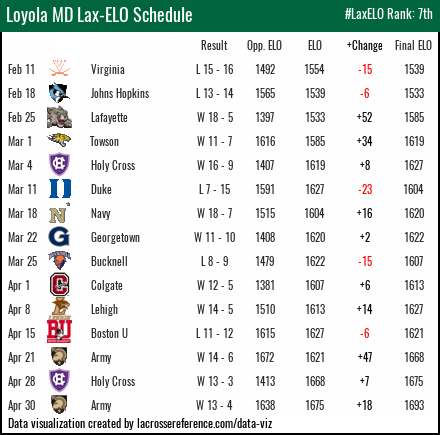 ‹ Who is playing in the lacrosse tournament? › A Clue to North Carolina’s Turn-around