NCAA tournament action kicks off today with Monmouth vs Bryant from Rhode Island. It’s a bizarre play in game because these two teams are number 2 and 3 in the nation in terms of defensive prowess. In basketball, play-in-games tend to be two cupcakes ready to get served up to Kentucky.  We have two teams here who, if nothing else, are going to give Maryland a stiff defensive test.

So it’s the first game, which is noteworthy in its own right. But if you haven’t spent a lot of time watching these two teams thus far in 2017, here are a few things to keep an eye on.

Can Bryant be effective in patient offensive sets?

Intuitively, Bryant’s offense clicks at a higher rate in wins versus losses.  As analytics tell us, if you score more goals than your opponent, you are much more likely to win (analytics joke).

But the interesting thing here is in longer possessions.  Bryant’s offense is about 7 points better in short possessions in games that they win.  In longer possessions, the difference balloons to about 15 percentage points.  The net effect is that Bryant’s wins feature an offense that gets a lot better as the clock ticks down on possessions. 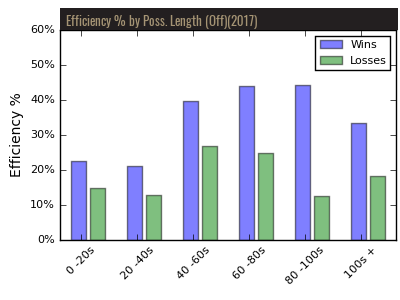 What’s also interesting is that Bryant doesn’t appear to be milking the clock in these wins.  We do see a small uptick in very long possessions (> 80 seconds) in their wins, but in the 60 to 80 second range, they actually have more possessions in losses than wins.

Given that some of their wins have been by big margins, you might expect to see a larger share of possessions that take a long time as they try to milk the clock down to zero.  The fact that we don’t see that suggests a consistent attacking style, which makes the efficiency numbers above all the more palpable. 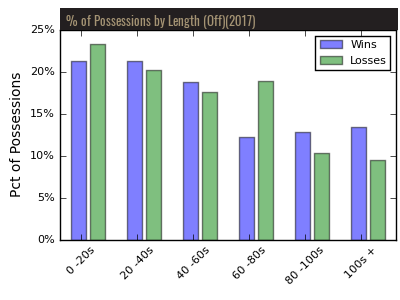 Patience and poise are tricky things to measure.  But let’s take our stats hat off for a second. Imagine a team that cooly probes a defense, looking for weaknesses, waiting for the right opportunity to strike.  That team would probably have an efficiency chart that looks a lot like the blue bars in the 1st chart above.  Additional time in possession becomes a chance to find the right opportunity as opposed to additional chances to turn the ball over.

As a newly avid Bryant fan, the net effect on your game watching today should be this: keep an eye out for what happens when Bryant has held the ball for 60 seconds.  Do those possessions end in goals?  Are they cooly probing the defense or do longer possessions more often result in turnovers.  The answer to this question will go a long way toward determining a winner today.

Does Monmouth go fast, come what may?

Thought experiment: in what situations is turning the ball over more a good thing? Answer: if you are Monmouth.

Now turnovers themselves are not good, obviously.  But they can be indicative of faster play.  If you are taking more risks, are probably going to have more turnovers.  Your goal is that the risks are paying off more than they are not.  Which would result in a net positive outcome in the form of more goals. 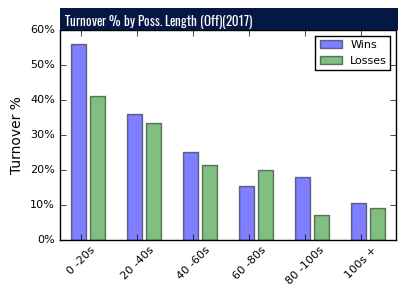 But with Monmouth, we see that they are significantly more likely to turn the ball over early in a possession when they are ahead.  One explanation is that in games they’ve won, they’ve played with a more aggressive offensive style.  And while that style may result in more turnovers,  it could also produce a more up-tempo game.

And it could be that a Monmouth offense that is playing more aggressively has other benefits.  Indeed, we see from the chart below that their offensive efficiency in possession lasting between 20 and 40 seconds is greater than 30% in wins vs 10% in losses.  It may be that “good-fast-Monmouth” sacrifices a higher turnover rate in very fast possessions for increased efficiency in pretty fast possessions. 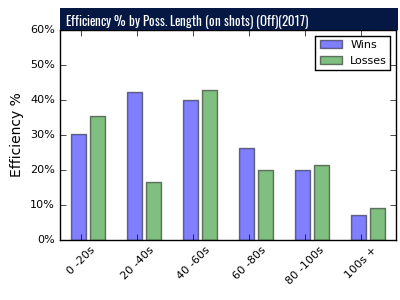 ‹ Duke is favored, but Hopkins has some options › Who is playing in the lacrosse tournament?