Johns Hopkins Part 2: Turning into a pumpkin after 60 seconds

Last week, we wrote about how the Johns Hopkins offense may be passing up shots when they have an advantage in favor of shots later in the possession when their advantage has diminished.  The analysis was widely discussed and some good follow on questions were raised over on LaxPower (special shout out to TheGreatGooglyMoogly).

One specific question that I wanted to address today was: how does Hopkins compare to the top efficiency teams in D1?  We thought it was a good next dive into the numbers, so we tweaked the analysis to produce some new charts.  For reference, the top 5 efficiency teams at the time of writing were: Villanova, Denver, Princeton, Penn State and Syracuse.  Hopkins is currently ranked 6th.

First and foremost, let’s level-set on possessions.  In looking at the chart below, what’s clear is that Hopkins has fewer quick possessions than the other top efficiency teams. 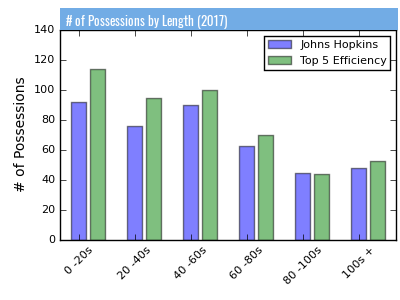 In our prior article, the most likely culprit for the trends within the Jays offense was an abundance of caution.  This chart does nothing to dispel that idea.  Hopkins simply has longer possessions than other teams.

The reason that this could be cause for concern among Jays fans is that Hopkins is actually more efficient than the other top teams in shorter possessions. 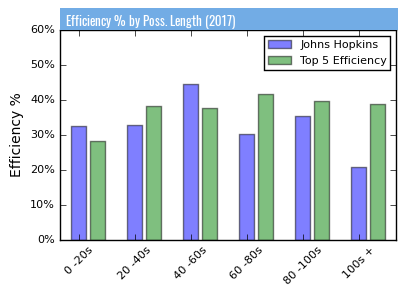 In possessions that last between 0 and 20 seconds, the Jays score nearly 33% of the time, compared to 28% of the time for the top 5 efficiency teams.  If you were bring Hopkins down to their level, across the 92 such possessions they’ve had, we’d be talking about net decrease of 4 goals this year.  If you expand this to all possessions lasting less than one minute, the Jays are nearly 6 goals better than the top 5 efficiency teams.

Intentionally speeding up to speed up can have negative consequences, but the numbers show that in faster possessions, the Jays have an advantage over other teams.  If they were able to use more of their possessions in this time range, they could press that advantage.

Speeding up is better than the alternative

A big part of the reason that we’d be in favor of Hopkins moving a bit faster to get a shot off (aside from viewing pleasure) is that the alternative is not pretty.  If we bucket possessions slightly differently, we can get a more nuanced picture of Hopkins performance.  The chart below, instead of sorting possessions based on how long they last, looks at when the first shot came.  This actually smooths out some of the variation between Hopkins and the top teams. 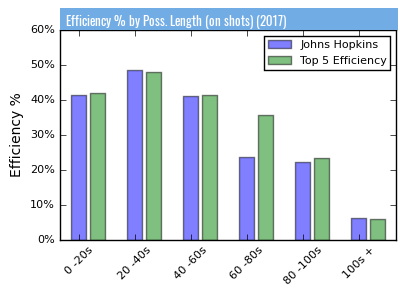 It also has the benefit of isolating decisions more.  Possession length is affected by a wide range of factors, but the amount of time that a team waits before taking their first shot is more in their control.  Put it another way, if you want to understand a team’s pacing, you need to look at when they attack, not how long their possessions last.

However, 15% of Jays possessions feature a first shot between 60 and 80 seconds in, and in those situations, they score on 24% of their possessions compared to 36% for the other top 5 teams, who experience a much more gradual decline in efficiency as they wait longer for a first shot.  Even after 80 seconds, the Jays are right in line with the top team averages. 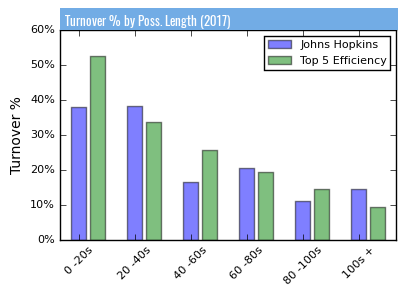 And it’s not a turnover issue.  It’s not as if the Jays are just fumbling the ball away after throwing it around for 60 seconds.  We can see from the above chart that their turnover rate for possessions ending in that bucket is roughly in line with the other top 5 teams.

For whatever reason, when the Jays wait until 60 seconds to attack, they are getting shots off, they just aren’t going in.

If you believe the hypothesis that the Jays coaching staff is putting an unnecessary constraint on a high-octane offense, (The Porsche idling in the Wendy’s drive through argument), then this could help your argument.  One reason that we could see a drop off after 60 seconds is that the team is encouraged to wait that long before taking a shot.  This would mean that they passed up better opportunities earlier in the possession, and once the possession hit one minute, they attacked.  But if their decision to shoot is based on an arbitrary time limitation and not the presence of good chances, this is the type of graph you’d see.

This is backed up by the fact that possessions where the first shot comes after 80 seconds have the Jays right in line with the efficiencies of the top 5 teams again.  If there is a 60 second constraint, but they are able to avoid the lure of finally being able to shoot, then they morph right back into a top 5 efficiency offense again.

And the net effect of that 12% drop off in efficiency, spread over 63 possessions 7.5 goals.  If you added 7.5 goals to the Hopkins offense, you are looking at at 35% offense vs a 33% offense.  This time of year, when games get tight, that could make an enormous difference.  And if, there is some sort of artificial constraint being put on this offense, it could be the easiest 2 percentage point efficiency bump any team has ever achieved.