We recently completed an initial version of our pace/efficiency metrics, which look at how quickly teams attack the goal after gaining possession. The key is splitting possessions up based on how they begin so that we can get a more nuanced view of each team’s strategy. The tables, updated daily, are here.

When we started to dig through the data, several things stood out, but one thing in particular piqued our interest.  Princeton, currently ranked 15th, has had a somewhat up and down 6-3 season thus far.  They’ve got wins over Hopkins and Penn among others and losses to Rutgers, Yale, and Hofstra.  So a somewhat unremarkable season.

The thing that piqued our interest was how closely a specific metric was aligned with their game outcomes.

Separating possessions based on how they start provides more nuance

A key element of our pace/efficiency approach is to bucket possessions up based on how they start.  We’ve used 4 different categories: Faceoff Wins, Defensive Stops, Unsettled GBs, and Penalties.  Each type of possession is unique because of how it starts.  A defensive stop is going to lead to a possession where the opposing defense is more likely to be set; you may even have a ride to deal with.  A faceoff possession is similar, except it is going to start roughly around midfield, and while the defense may not be set, they are at least prepared for the possibility that they may need to play defense.  A penalty possession is going to start with a guaranteed set defense.  And a possession that starts with a ground ball that was not the result of a shot is the most likely to be played against a scrambling defense.

Because each type of possession is going to face a defense in different stages of readiness, you’d expect teams to perform differently in each situation, depending on the particular strengths of their offense.  A team that excels in unsettled situations is likely to have success on possessions that start with a ground ball not following a shot.  A team that struggles with clears is probably going to be better on possessions that start with something other than a save.

I mentioned above that there was one metric that was particularly interesting for Princeton.  When the Tigers have been effective on possessions that start with a non-shot ground ball, they win.  When they’ve been below average, they lose.  It’s that simple.  Here is a helpful graphic that tells the story. 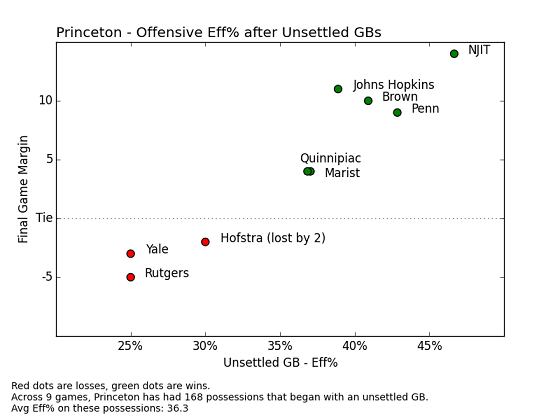 You can see that in the 6 wins, they’ve had an offensive efficiency above 37% in these situations.  In 3 losses, they’ve been below 31% each time.  To reiterate what these situations means, it’s possessions that being when Princeton picks up a ground ball that did not come as the result of a faceoff, blocked, saved, or missed shot.  We think of these as mostly turnovers and other unsettled situations.

The first thing we wanted to check was how their pace differed in these games.  Rutgers and Yale were 2 of their 4 fastest games, while Hofstra was their second slowest.  In this context, pace means the number of seconds between gaining possession and taking their first shot.  Obviously, lower numbers means a faster pace because they are being more aggressive in attacking the goal after gaining possession.  For context, against Rutgers, they took a shot 22 seconds after gaining possession, on average.  Against Hofstra, it was 31.  So it doesn’t seem as if the pace they played was the driver of this trend.

It  doesn’t hold for faceoffs though

You might expect that if they win when they they are good in unsettled situations, the same would hold for possessions that start with a faceoff win.  In this case, that’s not true. 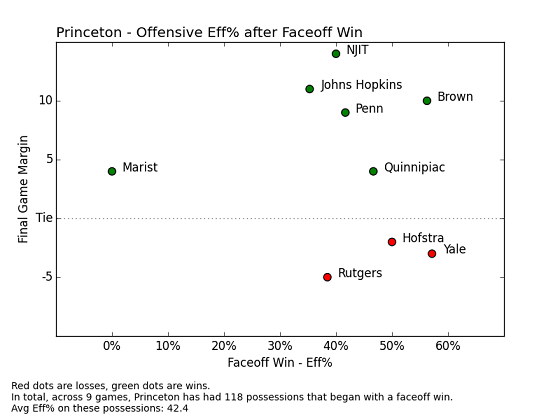 They had their most effective game against Yale, but that was one of their three losses.  In general, it doesn’t seem like there is any noticeable trend relative to possessions that start with a faceoff.   One explanation is that they’ve only has 118 possessions that started with a faceoff win.  So no matter how good they are in these situations, there aren’t as many as other teams might have, so it’s not going to have the impact on overall win/loss like it might with Denver.

Whatever is causing it, don’t point to effectiveness after a faceoff win to explain Princeton’s record.  It’s clear that their success in other unsettled situations is much more important.

There are tons of ways we could cut this information, and we will work through more and more of them as we continue digging into this data.  In particular, we will look into whether these numbers are caused more by the defense than anything Princeton is doing.  But I’ll save that for another post.