Ohio State appears to have tried to exploit a trend in their game against Penn State.  Needless to say it did not work, but if this was intentional, you have to give them props for trying.  If anyone out there is more familiar with OSU’s thinking in this game than me, would love to hear how this theory sits with you.  And check out all of our pace/efficiency data here.

To summarize, in the 7 games that Penn State had played prior to the OSU game, their opponents were much more successful in faceoff possessions when they went fast.  Ohio State played this game with a pace after faceoffs that was the fastest they’ve gone all season.  I won’t pretend to read the minds of the Buckeye coaches, but Occam’s Razor would suggest that they watched Penn State film, they saw how fast team fared after faceoffs, and they tried to replicate that strategy.  I’ve plotted out each of Penn State’s games so you can see how each team has attacked after a face off win. 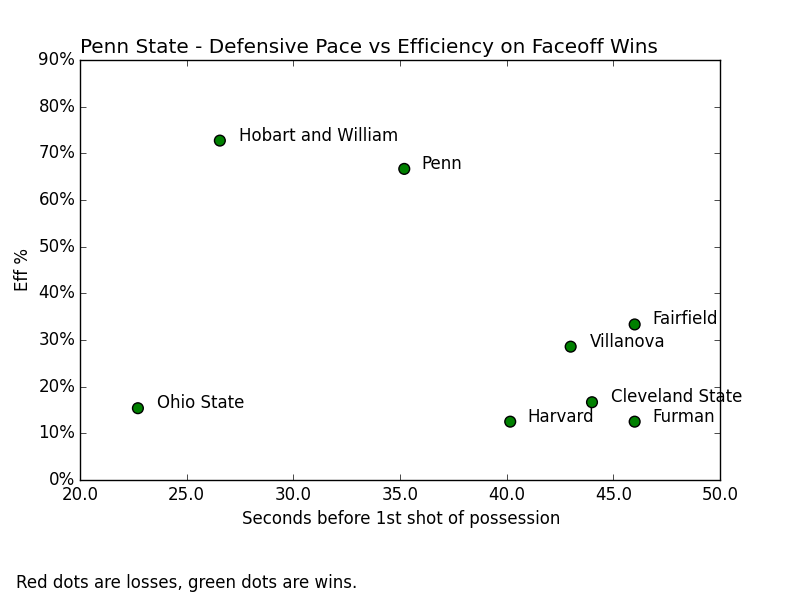 Hobart and Penn were the two fastest teams after faceoff wins.  In Penn State’s 5 other wins, the teams played much slower after faceoff wins, and had much lower efficiency rates on those possessions.  I can imagine that on film, the Hobart/Penn games, probably included a lot of scrambling Nittany Lion defenses giving up goals before getting set.  Or, in the other games, a lot of slower developing possessions that ran up against the PSU defensive wall.  So again, with the information they had, you can’t fault the Ohio State staff for putting together a game plan that attacked Penn State in faceoff situations.

But it did not work, clearly

There were 13 OSU possessions that we were able to chart that started with a face off win.  Of those, they got a shot off on 7.  On those 7 possessions, the first shot came after 41, 17, 18, 53, 10, 9, 11 seconds.  They scored on 2 of those shots (after 17 seconds and 10 seconds).  On the 6 possessions that didn’t include a shot, they lost possession after 39 seconds, on average.  So to recap, on possessions that started after a faceoff, the Buckeyes played with their fastest pace of the year, and had one of their worst efficiency games as a result.

There are two explanations.  First, it could be that Ohio State is not a team that is built for running after faceoffs.  Being aggressive in these situations isn’t just a mindset; you have to recognize when the opportunity is really there.  Being fast can be a detriment if your attackers aren’t finding open guys and making the scrambling defense uncomfortable.  Fast possessions for the sake of fast possessions can easily lead you down a rabbit hole of quick, contested shots from distance.  Again, I’ll let the film experts tell me if that’s what happened.

The other possibility is that Penn State has addressed whatever issues were causing the defensive struggles against teams that attacked after faceoff wins.  If that is the case, it would be a fascinating peek into the chess match of game planning.  You can’t fault an Ohio State team for trying to attack a weakness only to realize that PSU had fixed the issues.  Or, maybe this is an example of over-reliance on a “trend” and a team that was unable to shift strategies when they ran into trouble.  Is there some undergrad in Columbus who’s been shunned from the lacrosse offices after convincing the coaches to attack PSU early after faceoffs?

So what do we take away from this?  Without knowing the strategy that the teams employed, or whether this was even on their radar, it’s hard to say if there are any actionable takeaways.  Maybe you would say that Ohio State had the right idea, but just went a bit overboard.  Did they really have to play with their fastest pace of the year on faceoff possessions?  Maybe you look at this and swear off analytics as a pseudo-science like alchemy that is more likely to lead you astray than provide lead-to-gold lacrosse riches.

Personally, I think this probably is the right takeaway.  I mean, don’t swear off analytics, but this is an instructive case of why trends, especially trends based off of 9 data points, aren’t to be relied on.  I would never fault a team for trying to gain an edge using data, but I would fault a team for doing that and then not realizing that they must have a backup strategy in case their data-driven concept doesn’t play out.

And if anyone has any insider knowledge of this game that either supports or refutes what I’ve written here, would love to hear it.