Estimating the goal value of each type of play

With enough data points, it becomes possible to calculate the expected effect of a given play on goal outcomes.  We can argue about how many occurrences you need for a  model to converge on an expected value, but fundamentally, if a certain type of play more often results in that team scoring a goal than their opponent, we can say that it has a positive expected value.

In the simplest example, if you assume that Maryland commits a penalty, and Notre Dame has a 60 second man up opportunity, then within the next 1 minute, would you expect Maryland or Notre Dame to score more goals on average?  Notre Dame obviously, so we can say that the penalty committed by Maryland has a negative expected value.  I’ll go out on a limb and say that this is not a stretch for those familiar with lacrosse…or averages.

A few things stand out, some expected (and helpful for confirming the validity of the model) and some not.  First, if you commit a penalty, then you should expect to give up more goals that you score over the next 60 seconds.  Makes sense.  Same goes for turnovers and shot clock violations, if you give up possession, good luck scoring more than you give up.

On the flip side, the two goal entries are interesting.  It’s minimal, but both assisted and unassisted goals have a positive expected value, meaning in addition to the goal scored, the model says you should expect .03 to .04 goals in the next 60 seconds.  It’s tiny, but this speaks to the value of momentum?  Or perhaps it is less causal; just an implication of better face off men leading to more goals as well as more runs.  Most likely, it’s just the fact that a team scoring a given goal is minutely more likely to be the better team, and they should score more goals.  (Note to self: worth another post.)

After thinking more about this one, it makes more sense, but I was surprised to see Missed Shot as the highest net goal getter in this list.  (Mind you, our model differentiates between blocked shots, pipe shots, saved shots, and missed shots.)  In retrospect, it probably makes sense; if you have a completely missed shot, it’s probably getting backed up, so you still have possession.  Contrast this with a pipe shot which could go anywhere.  Also, a missed shot also means you are in attacking position with, presumably, enough offensive action to warrant a shot.  Contrast that with a ground ball, which means you have possession, but it may not be in the attacking end.

So what do we do with this information.  Well for one, we don’t start whipping shots over the goal from midfield.  This is a purely descriptive analysis; if someone in a wacko-universe adjusted strategy on account of this, it would be like the snake eating its own tail.

For starters, it would be very interesting to see whether there are certain teams for whom these values are starkly different.  Are there certain styles for whom a missed shot is not in fact a good thing?  Are certain teams better able to capitalize quickly on the change in momentum from a turnover?  All interesting questions that speak to style I suspect.

In addition, we posted earlier this month on our win-expectancy model, and these play-specific values are integral to that model.  Time, score, and possession create a very effective framework for determining win expectancy.  By looking at historical games, you can create a pretty accurate model based on the percentage of historical games in each situation that have gone to either team.  In fact, our model borrows this framework almost exactly.

The small tweak, made possible by our play by play data, is to adjust those numbers based on the flow of the game.  For example, if a team is down by one goal with 1 minute left, I’d be immensely more confident in my team’s chances if they’ve been whipping high quality shots just over the upper corners for the last 90 seconds than if they’d just recovered the ball in their own end and had to complete a clear and then get into the offense.  In other words, the most recent plays have some predictive power in what comes next.  We think that this is very useful if you are publishing a real-time win expectancy score.

Think of it this way, time-score-possession allows you to identify which historical cohort of games your current situation is most like.  And again, that is an incredibly useful benchmark when dealing with who is more likely to win a given game.  But in our estimation, that approach does not take into account the teams and game flow of the specific game you are looking at.  Time-score-possession gives a plodding team the same odds of coming back from 4 goals down as a lightning fast team.  But we know intuitively that a team with a more quick strike style of play is more likely to come back from that deficit.  (They are also more likely to lose by even more than the current score, but if you are just trying to predict who wins, this is irrelevant.)

And in future, this approach also opens the door to more sophisticated tweaks to the model.  Currently, we don’t look at the plays a team has used to get to where they are.  For example, a team that just expended a ton of energy to cut a 6 goal lead to 2 is probably less likely to win than a team that was up 1 and just gave up a quick three goal run to go down one.  Knowing the plays that a team executed to get to where they are now could really help to quantify that disparity.  An analysis for another day though. 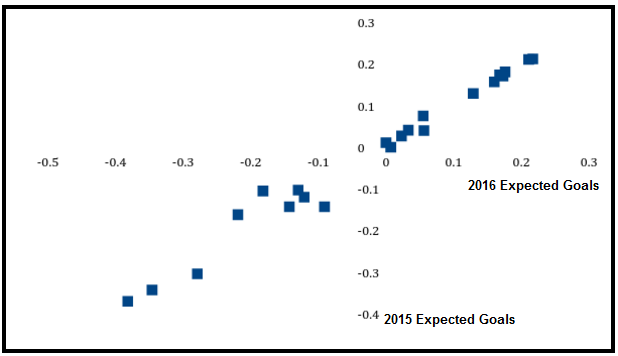